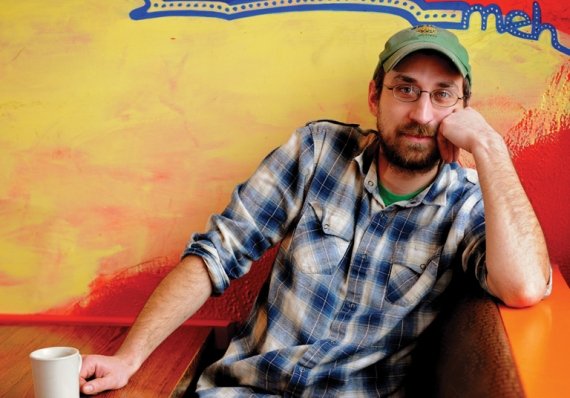 A Chat with “Taco” John Roth

If you’ve spent any amount of time in the South Wedge, chances are you’ve heard of John’s Tex Mex. Sitting on the corner of South and Alexander, the tiny restaurant provides homemade Mexican-inspired food, serving everything from burritos to their Sunday breakfast poutine. John Roth, otherwise known as Taco John, is the man behind the operation and describes himself as an “accidental businessman” when looking back on the early years of his restaurant.

What made you want to start a restaurant?

I had a job I didn’t like because it was the closest thing I could find to my field in Rochester. I went to RIT for photography so I was digitizing books in Victor. If I had stayed there I could’ve been making alright money but it was awful. Other than that, I didn’t really have that good of a reason. I liked cooking and thought it would be cool.

Did you have any business training?

No. I guess I’m accidentally a business person. I don’t really see myself that way. I guess owning a couple of businesses makes you a business person but I just wanted to open a restaurant and all the other stuff like bills and paper work just came along with it.

What is the hardest part about owning your own business?

I think generally being a boss. That never really entered my mind. When we first opened it was six, thirteen hour days. Come in, open it up, and close it down. I would do the line all day long. Prep in the morning and in between orders. But at first the thought of being a boss never really occurred to me… that and probably the hours. I used to cook dinner all the time when I had a day job. Now I cook dinner maybe every other week.

Why the Tex Mex theme?

Tacos are cool? [shrugs] I’ve always loved Mexican food. Even bad tacos are good, for the most part at least. I used to cook a lot of that stuff at home. But it’s not really Mexican, just Mexican inspired.

What is the best part about owning your own business?

We have all of these great peripheral relationships with people in the neighborhood and our regulars. We get this kind of love from them when they tell us they like our place. Also having awesome people working there. I’d like to think I’m a pretty decent boss. I try to be as fair as possible.

Just having the satisfaction of being a decent small business who’s hopefully contributing something as opposed to all of this chain nonsense that’s mainly just manufactured mediocrity.

I’m not saying we’re the best in the world but at least we’re different. I wanted to open a place that I thought I would want to go to.

What do you see in the future for the restaurant?

Usually I try to think of the future for me and my family which is me, my wife Jeanna, and the dog. Maybe eventually we’d find a new space that’s bigger but the thought of a second location kind of skeeves me out. For right now we’re just kind of letting it ride. We’ve done so well with that space, better than I could’ve anticipated considering how small it is. It’s been really good to us.  Obviously our customers are what keep us afloat, so thanks for keeping us around.