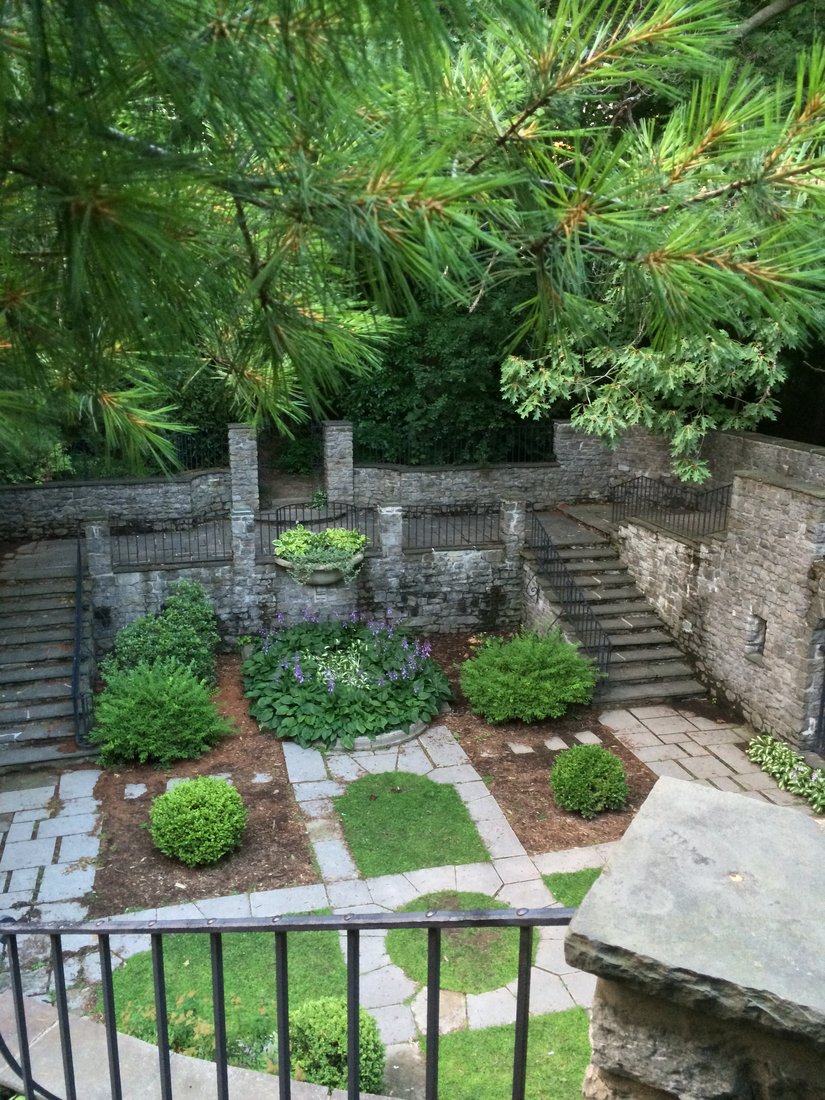 Everyone loves a secret garden. Tucked away in Rochester’s Mt. Hope-Highland Park area stands Warner Castle. Former private residence, sanitarium, and County Parks office; the castle and grounds remain county assets, and since 1964, home to the Rochester Civic Garden Center (RCGC.) RCGC is a non-profit providing education and promotion of all things horticulture. Best known for the annual Spring Garden Symposium hosted at the Memorial Art Gallery and their Summer Garden Tour, RCGC’s location in Warner Castle seems a natural fit. Together with County Parks, they are stewards of the historic house and garden.
RCGC has been at #5 Castle Park for 50 years yet the folks there are still routinely asked ”...is this the DMV?” The ‘secret’ aspect of Warner Castle is part of its appeal, and strolling about the grounds feels almost like trespassing. As if a genuine-looking castle complete with crenellated roof were not enough, the grounds feature a unique garden landmark from 1932- the Alling DeForest Sunken Garden.

The DeForest Arts and Crafts style features a symmetry in the layout of beds that one rarely encounters in modern landscape design. While the plants and wooden treillage of the original design have passed away into dust and a few old photographs, the stone and mortar forms defining the aesthetic have endured. The original context of the sunken garden kept it hidden behind a stately carriage house, also lost to history. One entered the sunken garden only after walking down a lawn flanked in deep garden borders, then through a trellis-enclosed formal rose garden. After all that dazzling garden display, encountering this secret garden, over 12’ below grade, must have been an astonishing, delightful discovery.

Experiencing the design of the sunken garden today inspires a nostalgic reverence similar to that felt visiting old cemeteries. The original plants gone; a few replacement Azaleas and Boxwoods show a glimpse of what was, and tease about what could be (given adequate funding and irrigation). Yet still the garden retains its allure, with multiple staircases, balconies, dry fountains and shaded galleries; a monument to good design. Over the decades the borders outside the sunken garden, still supporting some wonderful specimens, had lost their design and become host to some vicious weeds. Around 2012, it was clear something had to be done. With the help of some generous private donors, work was able to begin reclaiming the sunny border. Christine Froehlich, RCGC’s savvy executive director, later secured a grant from the Stanley Smith Horticultural Foundation to fund a portion of the shade border renovation. The grant provided a beautifully crafted wood fence in place of an old chain link, and for rebuilding a low stone wall that terraces the bed bordering new fence- both part of the historic recommendations.

In contrast to the DeForest sunken garden, with its need for historically accurate preservation, the borders and other gardens of Warner Castle, while demonstrating key elements of DeForest style, lack documents to confirm their origins. RCGC garden coordinator Milli Piccione has explored many resources in search of old photographs to help inform the renovation. Old garden images, some from the collection at George Eastman House, are precious and few in number. But the lack of specific original plans offers some leeway to represent later influences on the gardens, say Froehlich and Piccione. Some of the most unusual trees and shrubs on site are the result of the Parks Department using these beds for extensive plant trials in the 1950’s.

A work still in progress, RCGC is ready to begin the next steps of their renaissance. Piccione says none of the revitalization would be possible without a dedicated group of volunteers, some who have been with RCGC for decades. Opportunities to support the gardens abound- the best way to begin is to see it for yourself. If you’re looking for the DMV, you might stumble upon the secret gardens of Warner Castle, but why leave it to chance? The garden is open daily for discovery.