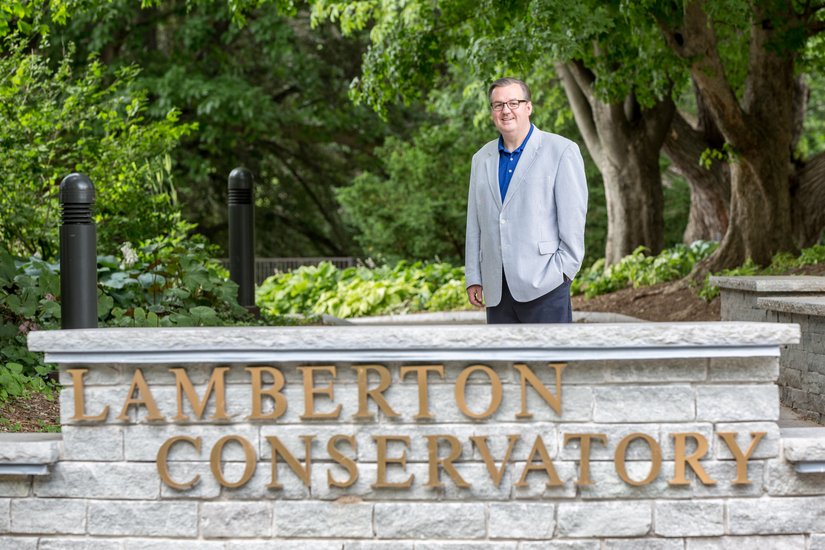 A walk in the park with Larry Staub

What does a good day at work look like for the County Parks Director who oversees 21 parks covering 12,000 acres, with 100 employees and double that in warm weather? In late June, Lawrence “Larry” Staub II was the first person to rent the brand new Abraham Lincoln Lodge in Penfield, for his twins’ graduation party. The new lodge is beautiful and he received many compliments from 150 family members there that day. (That is sweet.)

Trying to find Larry Staub at his desk may be harder than catching the wind, but his busy schedule includes managing Lake Ontario Beach, holy cow – the strategic plans for Seneca Park Zoo, and improvements at Powder Mill and Mendon Ponds. From disc golf at Churchville and Ellison Parks; tennis and pickleball at Churchville, Ellison, Greece Canal, Ontario Beach and Webster Parks; athletic fields in use from the end of June to Labor Day, boat launches at Irondequoit Bay Marine Park, he never knows what’s going to greet him when he walks into the office.

He did get to smile at the lengthy list of people from the Audubon Society to Wegmans with a wide range of groups in between, who thanked the Parks Department for hosting the 7th Annual Pick Up the Parks Event in April. Some days there are pleasant tasks like the unveiling of the 2016 Lilac Festival poster and school visits to connect local children to the parks system. Coming up, he will celebrate ten years as Park Director in August.

If, like me, you’re not a golfer, the transition of municipal golf courses to the county may not matter much, but it still has to be dealt with and plans for the Zoo are a sensitive topic, like tearing down the old Cooperative Extension building next to Highland Park South. Once the summer season is past, there’s also ice skating, sledding, downhill and cross-country skiing, snowshoeing, and ice fishing to look forward to.

Larry let me know it takes 21 Merit Badges to become an Eagle Scout and that’s how many he has, but his son Larry III has 59. Larry is active in Troup 325 that his son belongs to, as Advancement Chair. What’s that? The taskmaster who keeps scouts on track to complete their badges. Spring scouting projects included placing flags on local graves before Memorial Day; winning first place for their annual float making in the town’s annual festival, and Spring Round Up at the school’s annual carnival to prep for a trip to Gettysburg for leadership training.

Larry graduated from Bishop Kearney High School and majored in Asian Studies at State University at Albany. He’s been active in the Monroe County Legislature and Republican party and was offered a vacant legislature seat in the Perinton-East Rochester district two+ years ago, and then changed his mind about resigning from the County Parks.

Who knew that public-officer law allowed then-County Executive Maggie Brooks to perform his wedding at the Daisy Flour Mill in 2006? Or that he and his second wife, Dawn, purposely live on the same street as his first wife, Laura, who shares joint custody of the twins Abigail Adams and Lawrence III – and this arrangement has worked out well? For the record, Dawn who grew up in Hamlin and went to Syracuse University, has been county purchasing manager for 11 years. They met when he worked in politics and she was the last chief of staff for the late Republican Assemblywoman Audre “Pinny” Cooke.

Larry’s mom stayed at home and his dad worked in plastic injection molding at the cutting edge of the changes in that industry. As for any connection to Staub Dry Cleaners? Somewhere in Germany, not here.