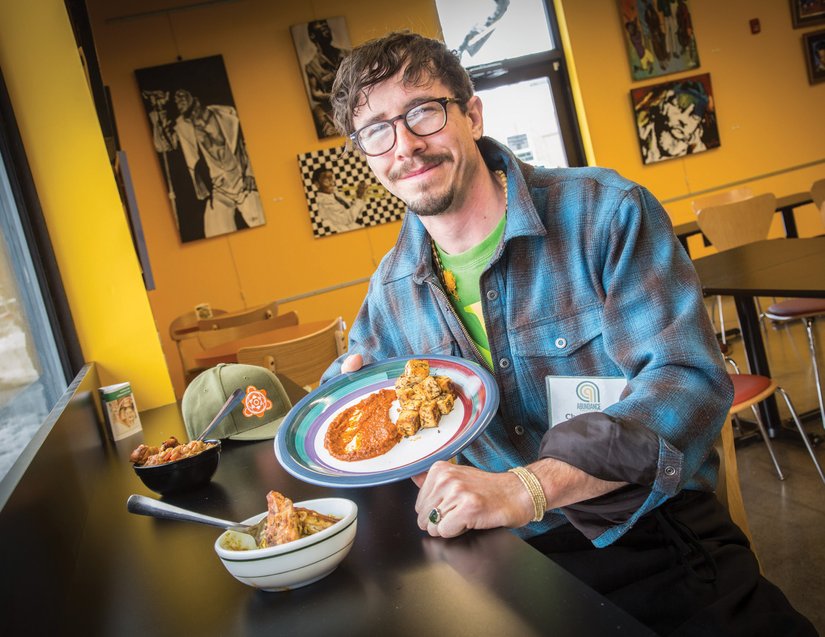 Abundance Food Co-op is the grocery store and community space around the corner. Whether you are a member, a frequent or occasional customer, or someone who is still wondering what the grocery store on the corner of Averill and South is about, there is probably still more to learn about Abundance.

First, what is a co-op? Co-ops, or cooperatives, have members that own the establishment. These members each get one vote in meetings. Co-ops operate under several guiding principles and values, including self-help, democracy, equity, and solidarity. As a food co-op, Abundance focuses on healthy, fresh, local, and organic foods while also promoting a healthy lifestyle and community beyond nutrition. Anyone can become a member of Abundance by paying a one-time membership fee, which entitles members to a monthly discount and participation in the management of the organization.

Numbering in just the hundreds across the United States, co-ops trace their history back to nineteenth century England. The first co-op was started by a group of weavers in Rochdale, England who turned to self-reliance following a failed attempt to extend voting rights to men without property. Oddly enough, a Rochester connection can be found with that earliest co-op site: after escaping slavery but before making his home in Rochester, Frederick Douglass completed a speaking tour while in exile that included two appearances at the British co-op.

Food co-ops first appeared in the United States during the Great Depression and developed through World War II. McCarthyism drove cooperatives out, and today only two from that era still stand. Co-ops resurged during the cultural revolution of the 1960s and 1970s, and Abundance, then known as the Food Store, was one of them. It started out of a house in 1968, then in 1974 moved into a former firehouse on Monroe Avenue.

“Food is what initially got people to come in, but there was a lot more: the communiversity, a variety of classes like self defense and how to not get ripped off by your auto mechanic,” says Abundance General Manager Jim DeLuca.

In 1999, the Food Store closed, but dedicated community members opened up a buying club on Caroline Street between Mt. Vernon and Meigs. Buying clubs do not typically have storefronts, but rather involve a group of people who share and rotate the tasks of tallying and making orders and distributing food to the members.

Meanwhile, the leadership at Abundance did its own shopping for a new location. They found a location at 62 Marshall Street, where they opened in 2001.

But they felt overlooked in that location. Owl House restaurant drew customers from far and wide to Marshall Street, but many did not notice the grocery store just a few doors down the block. The Marshall Street site also did not have any space for events. After years of looking, they finally moved to their current location in 2016.

Today, Abundance Co-op continues to offer much more than food. Their new building includes an event space for gatherings of around twenty people. Abundance has hosted events such as film screenings and origami classes for kids, and they share the space with groups like book clubs, social justice organizations, and language groups. They participate in local community events like the Wedge Waddle and the Rochester Pride Festival. Marketing and Outreach Manager Torin Washington plans to increase their community involvement with an events calendar of open mic, music, and other activities. “If people have ideas that they want to teach, they should consider that it could happen here, “ says DeLuca.

Abundance has its own gardening group, G2. Washington is working with students at School without Walls on gardening and community service activities. And he has plans to expand the gardening activities at Abundance. Inspired by his grandkids’ enjoyment of the Discovery Garden at the Museum of Play, he says, “a fairy garden captures the kids’ imagination and then they pay attention to everything around it. This is a perfect opportunity to engage kids, parents, shareholders… This can be an educational process from the ground up.”

What else is special about Abundance? Customers can purchase products here that aren’t sold in chain stores, such as Field Day brand goods. You can bring your empty containers of everything from soap to vanilla extract to rice from home to fill in the bulk section to reduce plastic waste. They have a deli and space to sit down and eat lunch. DeLuca hopes that Abundance can be an anchor in this community as the South Wedge continues to evolve and develop.