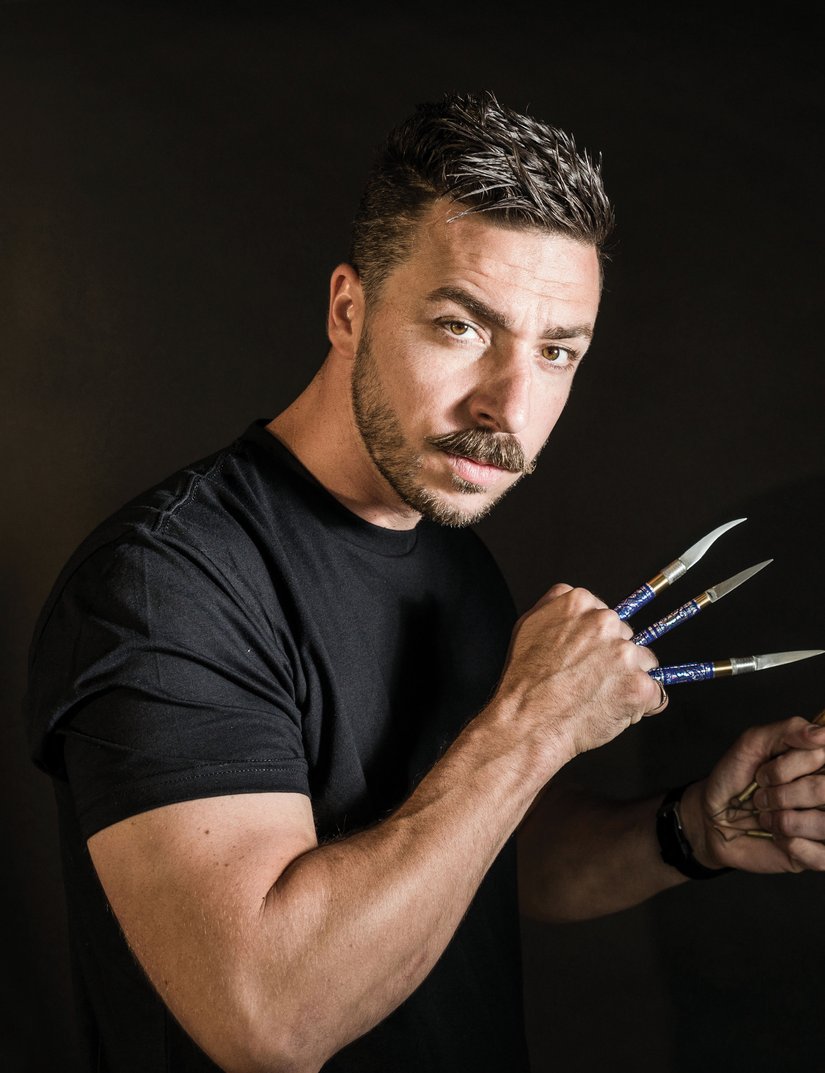 Adam Bierton, a Rochester native, is happy to be back where he started out as an artist, before becoming a professional pumpkin carver in the artistic capital of Brooklyn.

Halloween has always been one of Bierton’s favorite things. Like many families, his carved pumpkins every fall, but his parents are both artists, so the family often took the creativity to the next level. As a high school student, Bierton saw images of pumpkin sculptures online and decided he would do one crazy pumpkin every year, spending 8-10 hours on a single creation. Around age 20, he created his first “sculptural pumpkin,” depicting the snake head from Beetlejuice. He began to experiment with an etching style by just puncturing and carving away the skin of the pumpkin, allowing a certain amount of light to shine through based on the depth, rather than cutting all the way through and removing the flesh as in traditional pumpkin carving.

After moving to Brooklyn, he began working with Maniac Pumpkin Carvers, creators of custom pumpkin art. Both owners had been on the Food Network show Halloween Wars. They asked Bierton if he would like to give it a whirl. On the 2015 show, his team won the grand prize of $50,000 with a pumpkin shaped like a cauldron, skeletons crawling up its sides, for the theme “undead dinner party.”

Bierton took a hobby and holiday tradition and turned it into a profession. “I kind of give myself the title of Professional Pumpkin Carver, which is not something I ever imagined,” said Bierton.

Still, Bierton had strong ties back home to Rochester. A native of the 19th Ward and a graduate of School of the Arts, his early experiences here shaped him as an artist. “I’ve been an artist my whole life, but School of the Arts opened up new doors to materials and methods that I otherwise wouldn’t have had access to. My time there was invaluable in becoming the artist that I am today,” said Bierton.

While living in Brooklyn, he returned to Rochester to do pumpkin carving demonstrations at Lux Lounge and Blossom Road Pub. Now, drawn to return by family, he seems thrilled to be part of the artistic community here in Rochester. “The community and the arts here are so well-knit and I’m really excited to give my kids the same kind of experience that I had growing up,” said Bierton.

The purchase of his first house in the South Wedge at age 21 spawned the other part of Bierton’s business in creative fabrication and design. He taught himself how renovate the whole house, from tile work to plumbing and electric. He turned these skills into a custom design business in Brooklyn.

From his vantage in Brooklyn, Bierton has been able to see change happening in Rochester. “The Wedge was rough and now it’s up and coming and so tight-knit,” said Bierton. He plans to bring some of the Brooklyn flavor up to Rochester, and he is excited to come up here and start “building cool stuff.” Keep a look out for future live pumpkin carvings by Bierton this fall, and don’t be surprised if you see him launching new creative projects out of the South Wedge in the future.