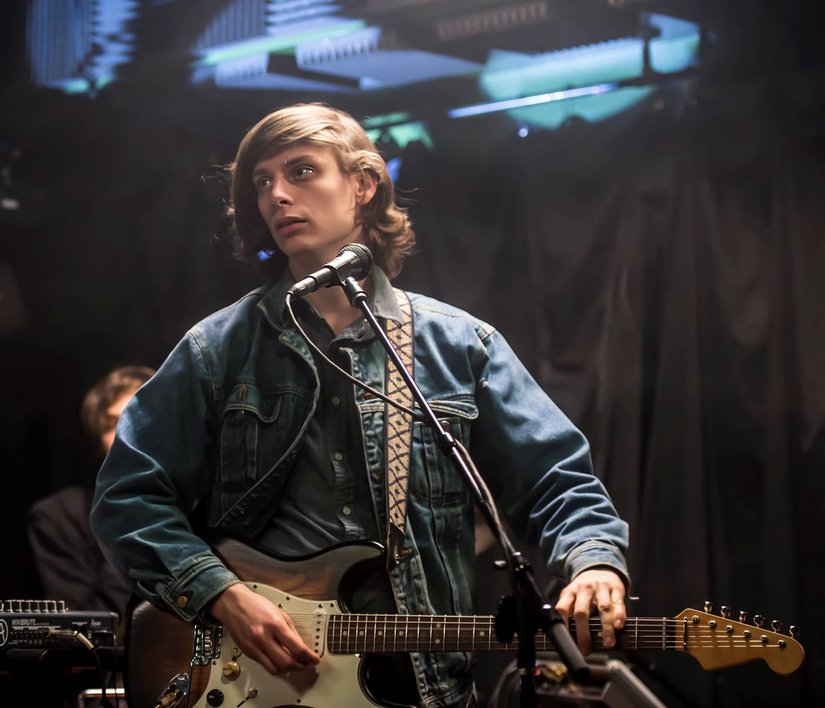 An Interview with Overhand Sam

After years of watching him perform, and adoring him from afar, I got the opportunity to sit down for a cup a joe and a shared scone with the one and only Sam Snyder, otherwise known around this town as OHS, or “Overhand Sam.”

With Maybird currently on the up and up, and working with “Dangermouse” Brian Joseph Burton”, the guitarist is currently living ‘between places,’ if you will, sharing his time between Ontario and Brooklyn.

LZW: Do you live in the South Wedge?

OHS: I did until about December. But because of the craziness of going back and forth, I had to move out. I’m half in Ontario with my parents and half in Brooklyn…We’re just back and forth, doing a lot of gigs in New York and working on the next ‘thing’. We just kind-of want to make sure we are doing it right. So, we’re trying to get as much shit ready for whatever is going to happen next. We are working on a bunch of new tunes and new recordings, filtering through that…but we would rather be over-prepared than underprepared and rehearsing and stuff like that…

LZW: Are you going to move out there?

OHS: It’s kind of up in the air at this point – Kurt and I definitely have an affinity to being in Rochester and so does the rest of the band….We all definitely like being here and it’s definitely comfortable, but the distance thing makes it tricky so it’s looking like we will probably be out that way at some point; I’m not sure when. We are probably going to be nomading it for a bit.

LZW: So there are a lot of balls in the air right now….?

OHS: There are a lot of balls.

LZW: All of the balls… (Giggling) So Maybird is taking off right now?

OHS: We are doing some stuff yeah…Working on some recordings. We are really just doing more of what we did before, its just that now there is good reason for it (laughing) – whereas before we would be writing a bunch of songs with really just the goal of making good music, now it’s like good music and then we can, oh, get it on playlists on Spotify…and more people are hearing it which is really good.

LZW: You’ve been in the music industry for quite some time – what’s it like to bounce from project to project? And what is it like to now have this consuming project?

OHS: Anytime something like this happens, everybody is sort of like, we kind of need to buckle down and work on things to make sure we have some momentum going. So really it is just like that. You want to be focused and there for whatever could happen. But playing in other groups, for me has always been a good outlet and it’s much bigger than just the business side of it. Like playing with Thunderbody is really nice because it’s a really relaxed setting and you can go play a four-hour show where one song might end up being 15 minutes long and nobody expected it until it happened. Or playing in my own solo thing is kind of the same way, we may just go off on some idea and it could go in any direction, but Maybird is pretty calculated…there is definitely some spots where we open up artistically and let things happen and every show is definitely different, but it’s because we rehearse all that stuff ahead of time. It’s really nice to be in a lot of bands because you can stretch out and then you can plan things. Everyone has been really understanding of the time we have had to devote to this (Maybird).

LZW: Where did you and Josh meet and how did you start making music together?

OHS: We met at a battle of the bands event at Nazareth College. We both lost…but we got to meet each other. It was cool because he listened to a lot of current stuff, and I was listening to so much old, weird stuff, that I was showing him things and he was showing me things. It was a really cool growth situation for both of us. We both see really eye to eye on things because of that. Our lives have been intertwined for the past decade. I’m not trying to be boastful of it, but I feel fortunate that me and my best friends get to make music that we don’t have to stress about…we stress in a good way, but we aren’t negative towards each other…we are always working towards the bigger idea.

LZW: So what is the dynamic like within the band as far as songwriting and how do you guys work together?

LZW: How did you first come to pick up the guitar and how did you get into music as an individual?

OHS: Music has always been in my family. My dad played guitar, but he played left-handed. My dad brought my brother a used not very great Squire Strat guitar. I had broken my arm and had it in a cast for 13 or 14 weeks. I had this cast that went up to my shoulder so couldn’t turn my hand over, so I set the guitar on a table and I would goof around and play it like a slide. I learned a bunch of songs that way. I hated the guitar kind of. I liked it because it was fun and I could do it, but thought to myself who the fuck would want to do this, it’s so hard…I’d hate to do it in a front of people because so many things could go wrong! My mind immediately went towards that. But in high school, I bought a guitar off of one of my friends and we started our own first band…next thing I knew I was playing all the time.

LZW: So was this cast what ultimately led to your unique guitar-playing technique?

OHS: Yeah! I had a lot of people telling me I was cheating. I was like, how can I be cheating…it’s not any easier doing it this way or else everyone would be doing it. I got some flack from some people, but I never really took it seriously and it didn’t ever really matter. As far as I’m concerned, guitar playing is ultimately secondary to making good music.

LZW: Who are your musical influences?

OHS: For me, it changes a lot. It changes a lot to a fault. We all try to stay as open as possible. I’ll listen back and I’ll know who I was listening to and what I was trying to do. Personally, I really dig Joy Division, because in such a short period of time there was such a full story of their come up and come down...and same goes for anyone who was part of that 27 club, like Kurt Cobain, Janis Joplin and Jimi Hendrix. I’ve always been a fan of underground music…it’s a good way to keep yourself fresh.

LZW: I feel like songwriting is really prominent in the Maybird songs I have listened to…

OHS: The key is, and I think that anyone in the industry would agree, is that if a song is good, almost nothing else matters. It could be recorded on a walkman or a voice memo on an iPhone and you coul release it…if it’s a good song, it’s a good song. It doesn’t matter if it was recorded at a fancy studio with this great producer. And that’s one thing that drives me crazy in this industry…there’s a lot of people that make you feel like you have to spend a lot of money recording an album…and I mean, the Maybird EP was recorded in a friends basement….

LZW: So what do you think makes a good song?

OHS: What makes a good song is when it’s something that imagery-wise is something you haven’t thought of before. Like for instance, the song Famous Blue Raincoat by Leonard Cohen; you never have thought of those words next to each other…to then present the imagery in your brain and begin to really realize what that may mean is really good. It should also have some depth and it should be intriguing. And, on the other end of the spectrum, almost the opposite, is really good prose. Literal verses and abstract concepts.

LZW: So lyrics matter to you…

OHS: Almost more than the music. It’s the most immediate connection to something that you are going to have. And that’s what’s really nice about this band. Josh is a really good songwriter; he’s really good at lyric writing. And the rest of us are great at jumping in and working towards the best imagery we can get. It’s fun for me afterwards because then I can go, ok cool, so the reason why I want to make my guitar sound like this, is because that line reminds me of this…and it becomes a really honest way of building a song up…the lyrics ultimately drive the rest of it.

LZW: I find that to be a refreshing stance on songwriting…I think there are a lot of bands where lyrics are secondary. I personally am drawn in by the lyrics.

OHS: That’s the thing. The most honest thing you can do is ask someone who is not a musician or instrumentalist, to be like, what do you like about music when they hear it? Nine times out of ten, they are going to say, I really like the words. It’s important not to lose sight of what everyone is going to want. I don’t like to forget people… When I write songs for myself…I tend to let it come from an honest place. I journal all the time or write really funny notes to myself, that I’ll look back at and they don’t make any sense….it’s good to write tunes that way…I like to let things be really quick and let them sort of write themselves. And then it’s a really honest version, like a snapshot or interpretation of that moment in my life. I think that any good artist is doing that, or at least I hope they are. I’m so excited for people to hear some of the songs we are about to put out. I’m really happy for Maybird to be in the situation we are in because, I know that we are all super honest with our work ethic and what we want to talk about during songs…we’re never trying to be something that we are not. Situationally speaking, the label that we are working with (who are such an awesome group of people) let us do that. They let us be ourselves in hopes that this will be the sort of thing that people connect with.