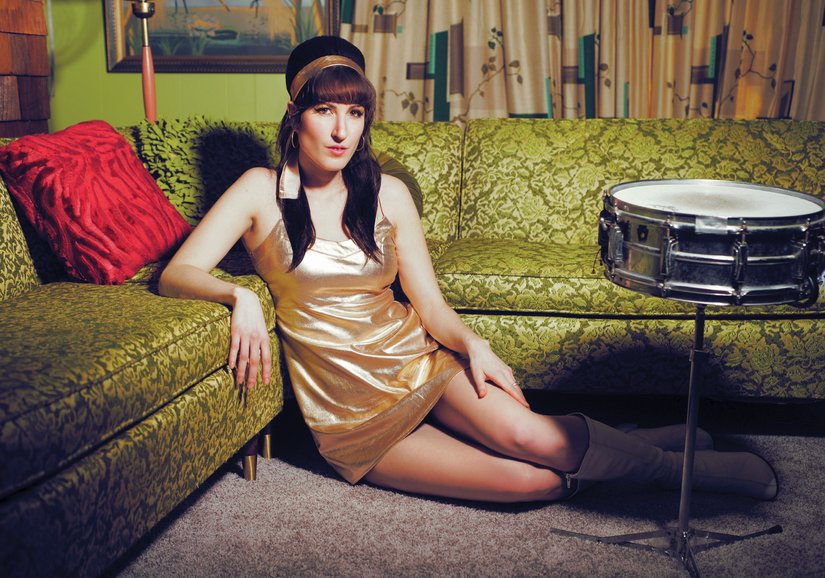 Anna Liebel caught the music bug as a teenager. Her sister’s band was on tour, and Anna was invited along to sell merch. “I’ve always loved music, but I had never played, really,” Anna recounts. “From there, I wanted to play in a band, I wanted to tour. It’s where I started.”

As soon as she got back home, she picked up the drums. After a couple years of dedicated study, she was restless and wanted to play out. Her first opportunities to play out were supporting Greg Townsend at Abilene.

One fateful Record Store Day at Bop shop, Anna got to talking with someone whose son’s band was in search of a drummer. That act has come and gone, but those early lessons in how to be a working musician endured. “It’s a lot of work, some luck, and knowing the right people.”

“I love the performing part,” Anna continues. “It’s almost like a religion. It brings you to a place you can’t find anywhere else.”

Although she gets swept away by the act of making music, she’s also very disciplined in her practice. ”I try to keep it structured. Because with the drums, you’re holding a lot together. You’re keeping time. I focus on getting the structure of the song right, and the tempo. I think what’s also important is the dynamics of the song.”

You can currently find Anna keeping the beat in a couple bands. Harmonica Lewinski has been a staple of the Rochester music scene for years, and is self-described as fuzzy wuzzy mambo rock n roll. The Surfrajettes are a newer band that played their debut gig at Lux Lounge last summer.

“It’s an unusual act, especially in Rochester where there are not a lot of all-girl bands,” explains Anna (check this quote). Not only do they play instrumental surf rock, they enhance the experience by dressing in 60’s period pieces.

Music has taken her to some interesting places. She’s toured throughout the Northeast and into the Midwest, and even into Canada. Anna recounts a particularly memorable house show in Toronto where there was no stage set up, and they played by the dim light of a nearby fire pit.

“That’s the great thing about playing shows, especially when you’re traveling. You get into the weirdest situations! A lot of times it’s okay. It’s not dangerous or anything. It just opens you up to things you wouldn’t experience if you just stayed in Rochester.”

As much as she loves to be on the road, Anna has plenty of love for her hometown. “There’s a strong community in the scene. People support each other. It’s a very creative town. There’s a lot of talent here. Also, for being a small city, the clubs owners really care about the music scene, especially at Abilene and Lux.”

What does the future have in store? Anna is hoping to do more touring, and get to spend more time in the studio. In the meantime, you can catch her perched behind her sparkling silver kit at Harmonica Lewinski and Surfrajettes shows.