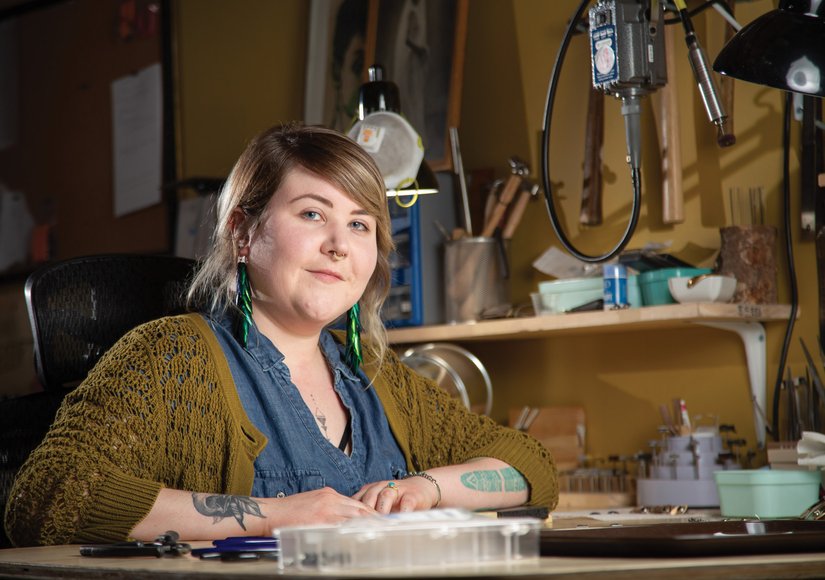 Four-year-old Ashley Landon was heading for a life altering surprise when she was lead through the doors of the Memorial Art Gallery for the first time. Her passion for art. She found it right there at the Gallery and her supportive parents allowed her to immerse herself in workshops for ceramics, metalsmithing, design and others mediums. She continued this path through high school and after graduation she moved to Brooklyn to study Industrial Design at Pratt Institute. But it was the post school void that left her with a bit of a crossroads.

"The typical industrial-fashion design disciplines like footwear and functional clothing never really interested me, but jewelry always did. Throughout the industrial design program, I think I grew to reject the idea of mass production more and more, which led me to the path of more traditional hand fabrication jewelry techniques. It was important to me that I personally handle every piece I make so that I’m more aware of my impact and footprint on the environment and community. I enjoy being present for the whole process of creating a piece from conception to the point that it finds its forever home. If I stayed in Brooklyn I would have gotten a design job, working and producing other people designs.”

Ashley took the plunge to move back home in 2011. One month later, The Knotty Owl (a collaborative naming effort with her mother) was born in her parent’s basement turned full studio where she was finally able to do what she loves best. Crafting, making, and immersing herself in her creativity.

“I tend to work in eight to ten hour shifts. I do them in batches and release them all at once. I tried working a smaller scale but can’t compromise the way my brain and artistic process wants to work by default. You can’t fight your nature as a person and an artist.”

Ashley has different collections centered around various themes and says she takes much of her artistic cues from nature.

“I like the gritty parts of nature. The natural life cycle; decay; bones, skulls, wood… There was a forest near my house growing up. I would pick up random treasures, animal based things, leaves. The moon has been a big symbol for me and my work in my life. I like reflecting that in my work. The moon phase is one of my main imagery that I go with.”

Some of her collections are more nature based, while others, you will find are more architectural and shape based. And other’s still have more physical symbols like eyes and hands.

Browsing through Ashley’s website (theknottyowl.com) which displays her self-crafted jewelry made of wood, sterling silver, bronze and gems, I was continually drawn to her pieces where human hands were the focal point.

The palms of these hands were created from metals of different forms, giving way to slender digits just partially open with the middle and pointer fingers of the same hand subtly touching each other. There’s a gentle gracefulness about them that invokes some sort of primal feeling I couldn’t quite put my own fingers on but they are intriguing none the less.

“Alot of people ask me what the meaning is behind them, if there’s some sort of spiritual or underlying symbol to them and I’m always afraid they’ll be disappointed when I tell them that they’re just my maker’s hands. I am a hands on person and everything I do, I do with my hands. From creating, to cooking, to drawing, to designing. My hands are an extension of myself,” Ashley admitted.

That extension of Ashley shines beautifully throughout all of her pieces.

Check out The Knotty Owl webpage, facebook, or instagram or the Clothesline Festival to see her work in person.