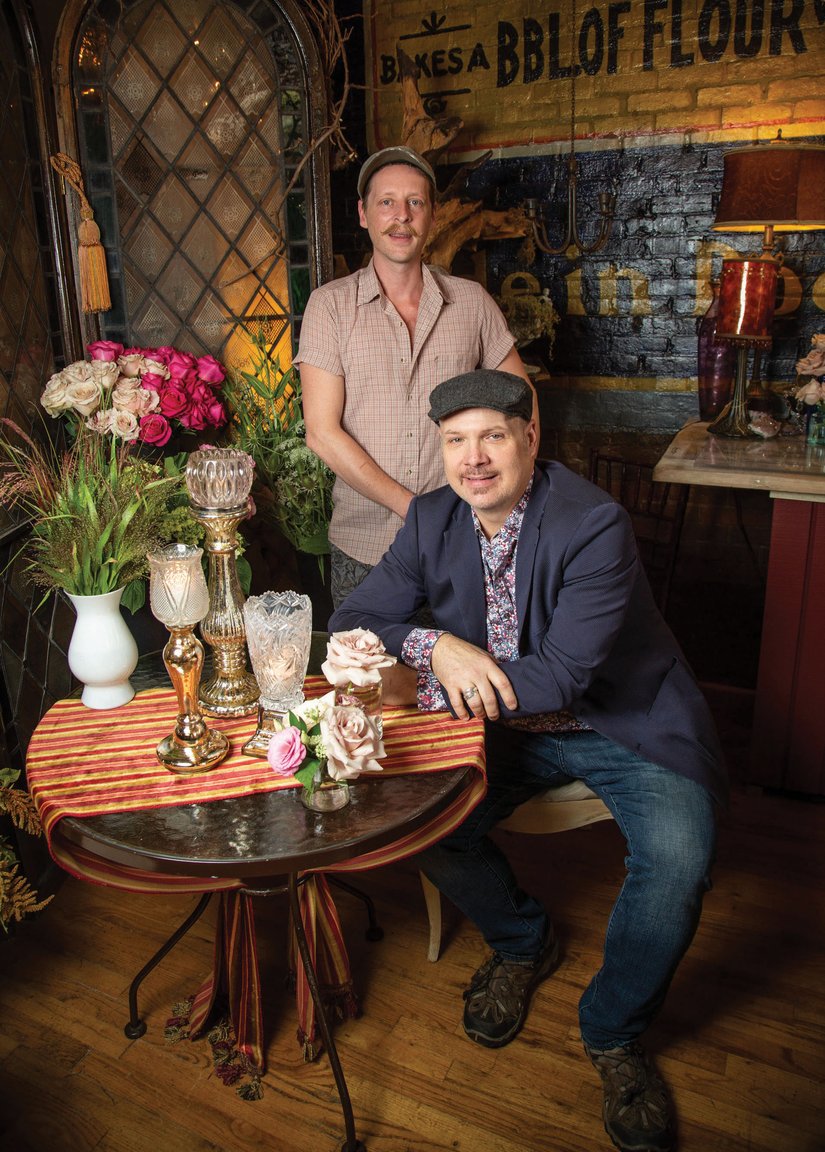 Mention the new floral shop on South Avenue and people want to know if they can buy flowers there. Yes. Walk-in hours are Wednesday to Friday, 10 a.m. to 5 p.m. and Saturday by appointment only. Stepping into the shop at 653 South Ave. is like walking into another world. This is a work studio for Bradley James and his partner, designer Jeffrey Hopeman. They are no strangers to long hours, momentous projects and magnificent results. His business card reads: Custom Floral Design, Event Planning, Corporate, Weddings, Interior Design Service. National and International Experience: NYC, Atlanta, Chicago, London, Paris, Madrid, Milan, Sydney and Tokyo. Nowadays he provides A European Experience in Floristry in Rochester, Geneseo and statewide.

Bradley’s path to the small shop has more highs and lows than most people can imagine. After 17 years traveling all over the world for massive, lavish royal weddings and events, he can drop names like nobody I know. And yet on Wednesday in August, there he was in work clothes, tackling the latest project. He loves working with flowers and if you scroll through the pictures on his FB page, your jaw will stay dropped open before you reach the bottom.

Bradley grew up in York, Livingston County, and admits he was such a bratty kid, that he was sent to a private high school. His family included his mom, an accountant and accomplished pianist who was a substitute for the Rochester Philharmonic Orchestra; his dad, a machinist; and his sister Susan with whom he competed fiercely. They had land, he rode horses, and everyone worked in the garden including an acre of asparagus. His mom, who was a terrific baker, encouraged him to do whatever he wanted to do.

Two of the roughest times in his life were when he had already been accepted at New York University and his dad died – while with him, alone in a boat, before cellphones. As they had done in sending him to private school, his aunt and uncle paid for his MBA at NYU, and for his sister, who was in her second year at Nazareth College. The next rough patch was 15 years later when he had a few days off, stopped in to visit his mom and stayed over. In the morning when they sat down to breakfast, she died of a massive heart attack. He said the experiences taught him resilience and strength.

In the meantime, while finishing his MFA at Oxford in England, he became a mentee of Robert Isabell, the celebrity florist who handled weddings and events for the likes of Sarah Fergusson, Vanessa Williams, Sarah Jessica Parker and Bette Midler. Isabell, who died in 2009, was a gruff man of few words and the job of working with celebrity clients fell to him. Bradley lived a fast-paced life of long days, six days a week for 17 years. It was killing him and he needed a break so he bought a house in the Rochester in 2001 and a floral shop in Geneseo; ran the shop there, with a warehouse in the city, for weddings and corporate events. Then 13 years ago he bought a three-story brick house in Corn Hill, which now houses a walk-in cooler for his creations. He’d fallen in love with South Wedge retail, was already friends with Lisa Myer of Flower Power and agreed to buy her inventory and take over her lease in May. The shop had a soft opening in July when he was already booked for six giant weddings. He describes the space as primitive Parisian chic.

Bradley sees himself and Jeffrey, who’s from Albion, as country boys transplanted to the city. They share the house with four adopted rescue cats, all male and neutered: two tiger brothers; a black and white; and a homeless gray tiger who decided to stay. On the business side of things, Bradley’s sister Susan, who he says has the Midas touch, does the books. For fun, each year he and Jeffrey spend two weeks in San Francisco and the Napa Valley and for down time, he watches American Pickers.