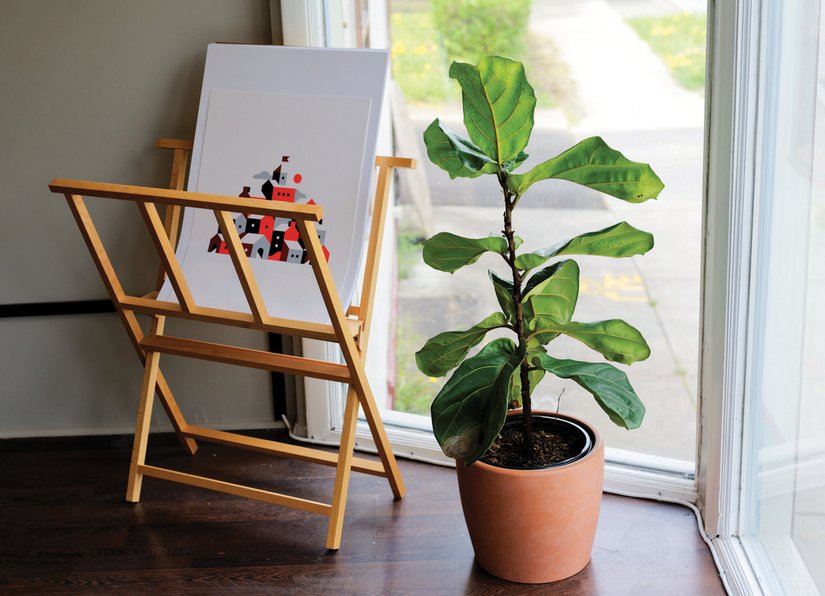 Warm mid-day light streams through the floor-to-ceiling bay windows of the Caroline Street studio, illuminating the rows of artwork that line the walls. The subjects in the frames range from cityscapes to state parks, and from 90’s pop culture to sci-fi futurama. Even with such varied themes, the pieces are all tied together by the bold shapes and fun color palettes. The distinctive style has become the hallmark of creative duo Alex Pasquarella and Matt Anderson of Canopy Design & Illustration.

“As soon as we met, we found our work was similar - the style and the way we create it,” says Pasquarella. “There are not a lot of people in this city doing this kind of digital illustration, graphic design hybrid. Our work has become very cohesive.”

“At the same time we each bring something unique,” adds Anderson. For example, he is drawn to nature and animals, and Pasquarella is inspired by architecture. Anderson has started a series based on state parks where he’s gone hiking, and Pasquarella has drawn some homes and cityscapes. But they also did a piece together for display at Gallery 1988 which is a collage of the Los Angeles skyline framed by the outlying desert flora and fauna.

Their designs drew the attention of crowds at last year’s Handmade Holidays event in The Wedge. You may have spotted their work in the window front display at Little Button Craft back in March, when they were the featured artist of the month. At my last visit to the shop, there were still a few prints of the illustration of our fair city of Rochester and a few of their sailboat design enamel pins. Their work can also be bought online through their website canopydesignco.com.

Looking at the work, it’s easy to spot both consistency and variation in their style. Three-dimensional objects become compressed into flattened images, eliminating the shadows. Some have pixelated edges, like an old video game or something built from legos. And others sport fluid curves. They play with angles, sometimes straight on views like their cityscapes, and other times looking diagonally from an angle that people wouldn’t normally see. And once they’ve decided on the shapes, they play with color palettes.

While they each started as freelance artists, they’ve found many advantages to working together. Pooling their talent and the management responsibilities means they’re able to take on larger projects.

“For our inauguration, we took on a big client - Discord chat service,” says Pasquarella. They created and installed the video-game inspired wall murals that adorn the walls at the company’s headquarters near San Francisco. Last year, they were invited to create a poster for Troegs Brewery in Hershey, Pennsylvania. The company did a beer tasting event at Rochester’s Record Archive, during which Canopy Design had a little pop-up shop.

While they love working on projects that involve travel to other locales they’re hoping to partner with more local and regional brands. They’ve found their niche and established their distinctive brand. Canopy Design & Illustration is poised to flourish worldwide and in their hometown.