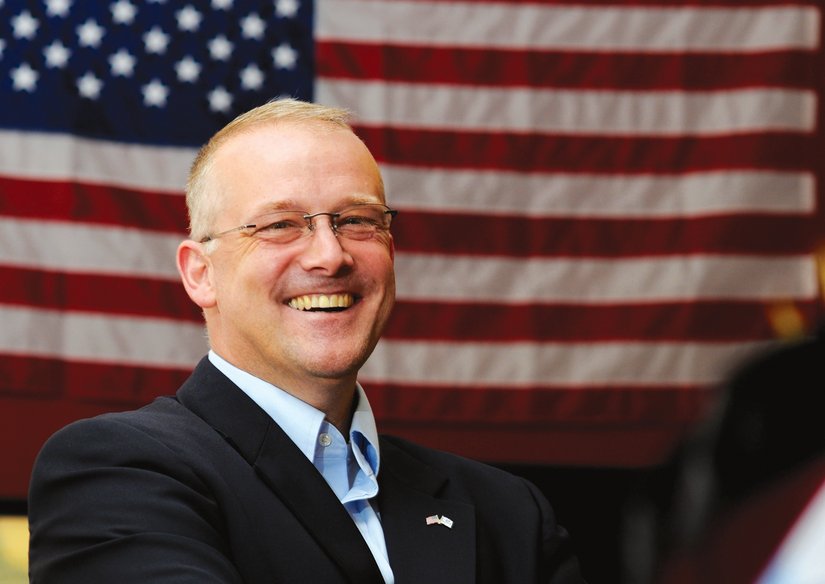 It feels like home walking into the Veterans Outreach Center. Not my home, mind you. I’m not one of the 7% of Americans who have served in the military. It has a homey feeling, from the greeting at the front door to the familiar banter between staff and patrons. It’s not surprising, given that the space used to be an old house. Donated by the Harry Caulfield and in need of serious repair, Vietnam veterans came and donated their time, talents and sweat to salvage this decaying house and transform it into a welcoming home. In much the same way, The Center helps to rebuild the lives of those who’ve returned from serving our country.

The man in charge is Colonel Gary S. Yaple. He became president and CEO in July 2012. The colonel is familiar with western New York, growing up in a little town called Newfield in the Ithaca area and has family in Rochester. He put himself through college, graduating from SUNY Cortland. He joined the ROTC while in college and made the military his career, becoming commissioned and serving on active duty with the National Guard for 22 years.

“You can’t do it alone; we have to work together as a community.”

The colonel personally values being in the South Wedge, appreciative of the community, business district and Napa Pizza. The South Wedge is an ideal location for the Center as well. “Everyone knows the South Wedge. That’s all you have to say … and everyone knows exactly where you are.” The Veterans Outreach Center’s permanent home at 459 South Avenue opened in 1984, and expanded with The Stars and Stripes Flag Store which sells Made in the USA American Flags, along with numerous other military and patriotic merchandise. All sales through the store support the programs of the Center. In 1999 Richards House opened to house and assist homeless veterans. In 2007 the Charles P. Golisano Center opened with a new technical center and computer lab, doubling office space. “When veterans walk through our doors they are coming home. It’s not some sanitary bureaucracy where you’re going to sit in rows and wait for the next person to call you up...You become part of the family. We don’t charge anything … and we remove all barriers,” explains Col. Yaple. Regardless of the classification of discharge (honorable, dishonorable or other than honorable), all veterans are welcome. “We don’t care. You come in here, we’re going to connect you with the services that are available to you.”

One would think that every city would have a Veterans Outreach Center but organizations like the Center are rare across the country. “New York is unique in that we have several communities that have veteran service agencies and organizations in place but there’s none quite like Rochester where we have all the programs and services and collaboration and everybody working together to serve our veterans right here.” While the Center is funded by federal, state and local grants it’s the collaboration with the community that makes the Center a success. They have strategic partnerships with Compeer CORPS providing peer to peer programs; Monroe County Legal Assistance Center for legal services; RIT and MCC for education; Nazareth for the Wellness and Creative Arts Therapy programs. “You can’t do it alone; we have to work together as a community.”

The Center recently partnered with Colgate Rochester Divinity School opening “a facility called Andrews Hall with 12 apartments in there, it used to be senior student housing and it was sitting empty and through a partnership with them they said ‘Let’s take some of your most senior veterans the ones who are about to transition out to the community on their own but still need some help and let’s move them into these apartments.’ So we have 12 veterans up at Colgate and they’re paying some of their rent and they’re getting help from the grant systems to pay the balance of the rent. Colgate’s loving it because it’s tying the veterans with their student community.”

Colonel Yaple is an OPERATION ENDURING FREEDOM veteran serving in Afghanistan in 2008 commanding 10,000 coalition troops and helping to train the Afghan police and army. Prior to coming to the VOC he served as the Chief of Staff of the 42nd Infantry Division, headquartered in Troy, New York. He is still serving in the reserves. “A lot of people think I’ve retired. I could have … but I’ve got more to give so I went back to a traditional National Guard status doing my drill weekends and annual trainings in the summer”

Shortly after starting his job at the VOC, he was called up to help with the Hurricane Sandy relief effort. “ … I served down there for about 30 days as the National Guard Commander in command of all the National Guard troops down there answering to what is a new term called the Dual Status Commander, the active duty and National Guard Commander One Star General. So we broke some new ground in history of our country where we had our commander commanding both active forces and National Guard forces at the same time. So that was a pretty interesting start to my traditional National Guard job and my new job with the VOC. Thank god we have a great board of directors and they gave me full backing and support and said ‘you know what this is what we signed up for when we hired you. Go do your thing.’ That says a lot about what the VOC stands for. We support our veterans and we support our National Guard and reservists. Those are our clients. And I think I can stand as a very good example of the VOC’s support to veterans. “

The Veterans Outreach Center is celebrating 40 years of service to the greater Rochester veteran community this year. The Center embarked on the Home Front Flag campaign, aiming to raise $70,000, about a $1 for every veteran in our community. You can show your support by donating to the campaign or flying a ‘Made in the USA’ American flag on your home. “Rochester is time and again recognized as one of the nation’s best places for veterans to come home to and we know why. Because our neighbors welcome our veterans with open arms, our employers with jobs, and our colleges and universities with opportunity. Giving just $1 for every veteran is a small gift that will yield a huge impact through our Center, and help us ensure we will be here for another 40 years and beyond.”