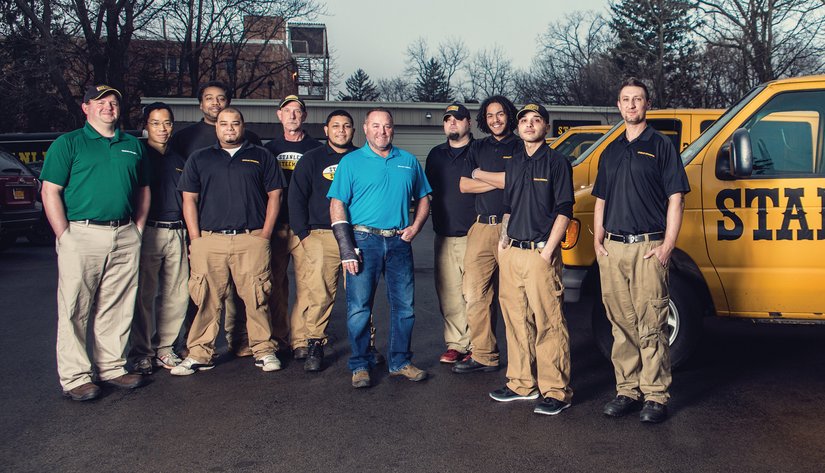 A typical day for Dave McBride starts at 7:30 AM, a half hour before the Stanley Steemer office on South Avenue opens; and the work day ends when they’re done. He said that since the franchise territory stretches from Lake Ontario to the Pennsylvania border, west to the Buffalo operation border and east to the Syracuse operation border, his crew can be anywhere on any given day. Busy season starts in May and ends before Thanksgiving, their busiest time of the year. In the spring, he has a crew of 22 employees and keeps 15 on over the winter months. They book out a few days ahead in warmer weather and more quickly over the winter.

Dave, officially David Jeffery, grew up in Cleveland with his parents, brother and sister. When asked if he’d always wanted to own a Stanley Steemer franchise, Dave recalls one summer when he was 16 working in a restaurant while his brother worked for Stanley Steemer. His brother made more money than he did so Dave switched jobs and worked there during high school and all through college. He received his degree with a major in business from John Carroll College in Cleveland, in 1989.

Dave said college was helpful because it taught him the importance of deadlines and he learned firsthand the difference between real world vs. textbook learning. He managed a Stanley Steemer franchise in Cleveland until 1996. He and his wife Lisa had also bought a restaurant that she ran. When she became pregnant they sold the restaurant and moved to Rochester, where he has had his franchise ever since. “Rochester was one of the last major markets available in the USA and we liked it because we could still make the drive back to Cleveland to visit family.” July will mark three years on South Avenue. In keeping with the company’s motto, “A cleaner home is a healthier home,” they clean carpets, tile and grout, hardwood and upholstery at home or office, and area rugs at the shop. Stanley Steemer also does water restoration and flood work that can put Dave on call 24 hours a day.

Dave and Lisa, who is 100% Sicilian, were married in 1991 and have two daughters, Eryn, 22 and Rylee, 17. According to Dave, Lisa has her work cut out keeping him in line. Eryn is now a colorist at Scott Miller Salon; Rylee goes to high school in Webster and works at Gold’s Gym. In his spare time, he enjoys boating, snowmobiling and dirt biking at their country place in Tug Hill where they bought the former St. Peter and St. Paul, an old Catholic Church that was built about 1918, and turned into a getaway that can sleep up to 40! His favorite vacation is the family gathering for the Fourth of July at Lake Chautauqua, where he’s gone since high school.

Dave lives on espresso that he gets from Coffee Connection. His favorite off-duty choice is Labatt’s Blue. Pet Peeve? “People talking while I’m talking.” As for the nosy question, ‘Who mows the lawn?’ He does, on his tractor. The McBride family circle also includes 3 Labradoodles, Stanley, Maxx and Jack.