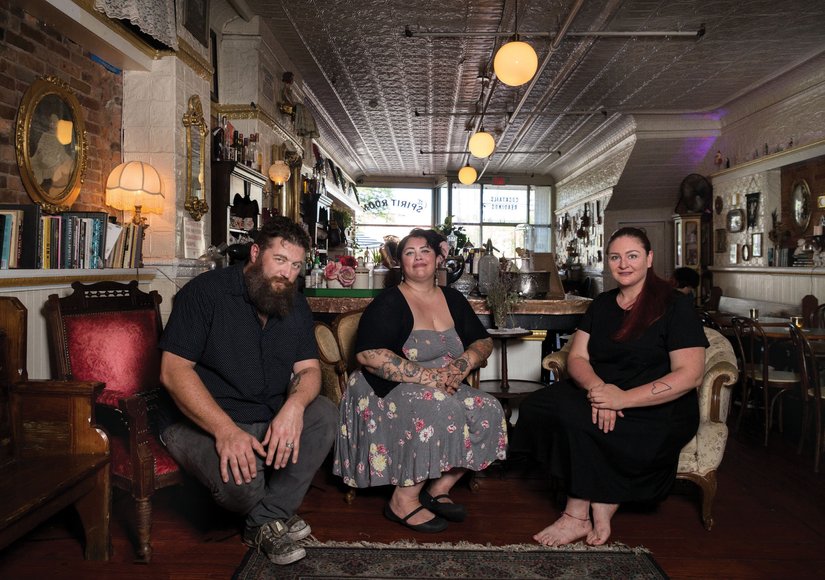 “Tell him about the dimes!” Gabrielle the bartender yells, overhearing the conversation, Rachel McKibbens, The Spirit Room’s co-partner and resident poet laureate, smiles. “When summer was starting, and we hadn’t anticipated the slowdown from everyone staying outdoors, we were figuring out ways to be smarter with our finances, and suddenly dimes would start just...appearing all throughout the bar. Beneath candle holders, under rugs. And we don’t give change here.”

American gothic literature is filled with themes of the unexplainable, the curious, the unsettling, layered just underneath the mundane world’s surface. It’s as if there’s a dimension of reality that most people can’t quite see, as if there are places where the fabric between the everyday world and the spiritual world wears thin.

This notion did not escape the founders of The Spirit Room, a small craft cocktail parlor perched at the corner of Andrews and State Streets, as if at the junction of two ley lines. The place looks like a cross between a cocktail full of ghosts a 1920’s New Orleans drug store and a Tennessee juke joint. And from the tarot card readings, to the decor’s masonic overtones, to the names of the drinks themselves, the celebration of the bridge between tangible reality and.something beyond… is evident.

It all starts with The Fox Sisters-three teenage Wayne County girls whose emergence as lightning rods for the paranormal in the 1840s did much to ignite the spiritualist movement in America.

“Rochester history is usually presented in a more sanitized way,” explains Jacob Rakovan, part owner and bartender, “but in reality you had spiritualists, abolitionists, suffragettes, and cranks all blending together into a fascinating melange. I wanted to embrace the weird and rich history of Rochester.”

“The Spirit Room gives a nod to all the odd, little-known Rochester facts.” Rakovan continues, “Elvis Costello was booted from the old punk bar, Scorgie’s. Metallica kicked out Dave Mustaine during a performance here. Daredevil Sam Patch threw his bear over the High Falls. Then there’s the late, great Betty Meyer’s Bullwinkle Cafe, whose eccentric owner required everyone to wear a big fancy hat to enter and fellow Eastman musicians played back up piano and accordion to anyone willing to take the stage.”

As acclaimed poets, with books and tours and festivals to run, Rakovan and his wife/business partner Rachel McKibbens absorb that entertainment history and quirk. They use it to inform their audience, the performers onstage (who could be any patron, really), the unsuspecting randoms who just wanted to grab a Genessee before the Wings game, that this is a weird, old, in-the-moment place.

Rakovan is quick to point out that his bar is not for everyone. “We get a lot of Yelp reviews that just say: ‘Kitsch,’ he chuckles. And he is very clear that, if you’re disrespectful of others personhood, angry, or closedminded, he’d prefer you take your business down to the chain restaurants down the street. This is a place you have to sink into, and not everyone wants to take the time or open the mind space to do so. But for those that do “get it,” You find the apex of the cocktailmonger’s art, kick-ass shrimp and grits, old-tyme banana pudding, and the occasional Broadway star rising from the pine and belting it out on stage.

It’s at this point you start to realize, not every portrait decorating the room looks like it came from a Victorian thrift shop. Although still a very young bar, The Spirit Room had to deal with the life cycles of its own patrons, when regulars pass on, their pictures go up on the walls. It gives the dear dead a chance to continue rubbing elbows with the living.

In that sense, The Spirit Room honors the true undercurrent of the cultural death festival, be it Halloween, El Día de Los Muerto, All Saints day, whatever. It’s the kind of place designed to remind us, over a Fox Sisters Cocktail, that interfacing with the notion of a supernatural world beyond isn’t about fright, but about understanding our place in a greater continuum of what’s come before and what’s on the way. In a weird bar. In a weird town on the Genesee.