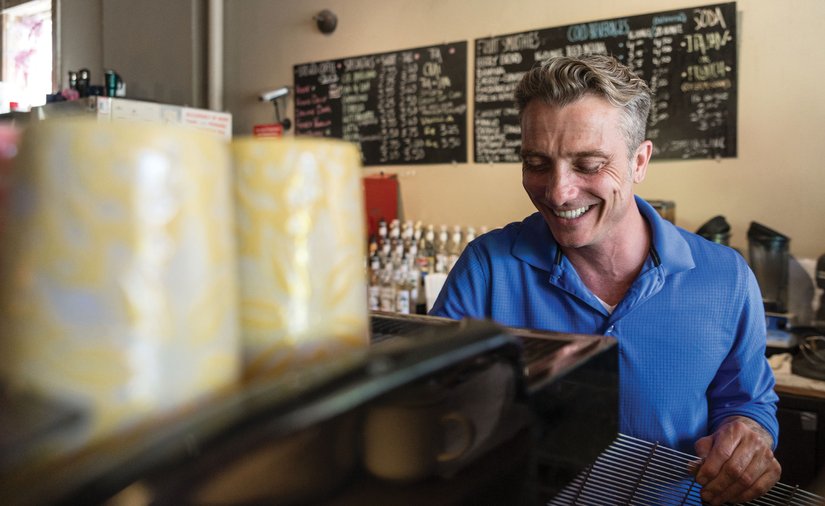 It’s been eleven years since Equal Grounds Coffee House broke proverbial ground in the South Wedge but its intention presented itself long before, when a frustrated couple wanted to do nothing more than hang out together in public. Except they couldn’t— because they were a same sex couple, and at the time, being LGBT basically meant they could only venture out after hours at certain bars and clubs where it was “accepted.” That was a lifestyle in which John White and Harry Bronson weren’t interested.

“We both concluded that it would have been great to have something like a coffee house where we can go out and be a couple and be comfortable at any time of the day, not just when the sun went down,” says John. It appears that the intolerant attitude of that area turned out to be a fortunate endeavor for the rest of the community, and fate agreed by opening a door. While they were considering other spaces, the hardware store at 750 South Ave happened to announce that is was closing, which gave John and Harry the perfect home for their new business. And a name.

“The name is significant,” says Harry. “John came up with it. Equal Grounds is obviously a play on the words, ‘coffee grounds.’ But the whole idea… of being conscientious of the LGBT community but also of the broader community so that everyone is feeling welcome, the idea of having sustainable beans so that we’re helping the environment the best we can, of having it fair trade and using Perry’s Ice Cream, a union shop that also ties inthe workers’ rights issue, too. There’s a consistent theme throughout everything that we’re trying to do.”

Indeed, just about everything in their shop is locally sourced or fair trade. Their coffee is organic, sustainable, fair trade, and roasted by Canaltown Coffee Roasters right here in Rochester. Their teas, pastries, merchandise and artwork are born somewhere within New York State and are just as unique as the vast array of clientele that indulges their senses,with all of the tasties that Equal Grounds, has to offer.

“We have a large footprint so we can have a lot of customers at one time. And that allows us to have groups that want to meet here even though it’s not really formalized with us. They reserve space, gather, have conversations…LGBT groups come in, knitting groups, a lot of clergy meet here,” Harry says.

While people take it upon themselves to utilize the safety and energy of the place, Equal Grounds holds their own events for everyone. They’ve held weddings, support events, and various soirees to celebrate social milestones like marriage equality when it became a law in 2011. They host weekly open mic poetry and game nights. And their biggest event is held during Pride Week called, “The Good, The Bad, and The Funny” where a local trans activist hosts and is a huge draw for people all over the state. Open arms and open mics welcome poetry, short stories and art.

After a decade plus in business together, this couple, now an ex-couple (but still maintain an incredible friendship) cite their long term success with Equal Grounds as partly to do with having the perfect business partner, their loyal and diverse clientele, as well as their warm, creative staff who make the customers feel valued and cared for.

“I knew that if we were able to pull it off, it would be an important fixture in the community but I didn’t realize how important it would be. What I’m most impressed with is the number of families in the neighborhood that bring the kids out. The children hang out here and it’s a marvelous mix of people who are just being people. And judgement is left at the door when they come in. It wasn’t that long ago when people didn’t talk about gays in a positive way. It was this secret lifestyle. It wasn’t on print or television, just when something bad or strange happened. And it’s completely normalized here. We have people of all economic, social, racial, religion, physical and mental abilities. Everybody’s there and we accommodate them all. They know that if anyone gives them a hard time, that person is not going to be staying. It’s so much bigger than we anticipated but at the same time it’s exactly what we wanted.” says John in regards to what has attributed to their longevity as a whole.

Harry adds, “Our philosophy is said in two words. “Equal Grounds.” No matter who you are, what you look like, who you love, what your ability is, we want to make sure that you know you have a safe place.”