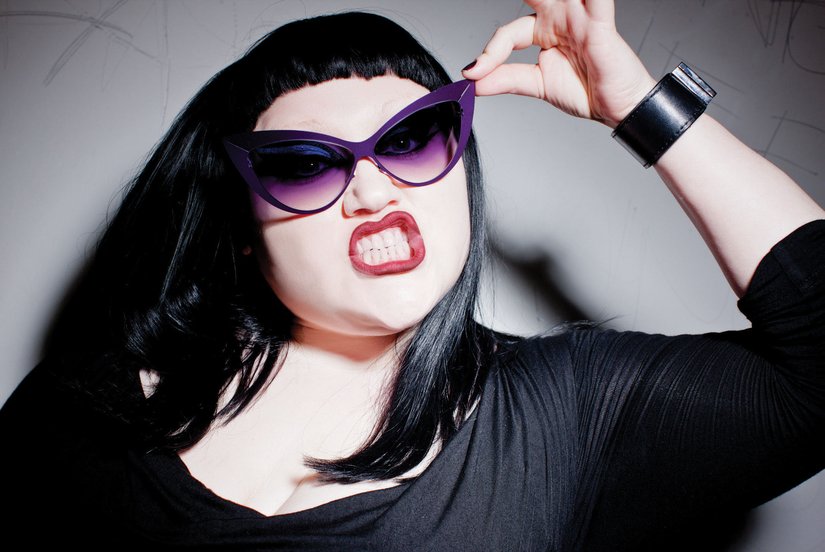 Getting to Know: Beth Ditto

Small-town Arkansas might seem like the least likely starting point for someone who would eventually become a queer icon and be called “the coolest woman in the world,” but that’s precisely the case with Beth Ditto. Leaving Arkansas as Mary Beth Patterson at the age of 18, Ditto relocated to Olympia, Washington in 1999 and formed dance-punk band The Gossip shortly thereafter, taking on vocal duties. Even though she had left her Deep South hometown and religious roots in the dust, clues of her origin were still evident in her powerful, brassy voice that’s just as much Sunday morning gospel as it is as a punk rock warrior’s call to arms. It’s an undeniable vocal presence that’ll make you wanna TESTIFY.

Over the course of 10+ years, five studio albums and numerous singles and EPs, The Gossip delivered a potent blend of angular, danceable rhythms delivered with punk rock fury and urgency. And it’s no coincidence that Olympia, the scene that gave birth to the riot grrl movement a decade before, would also imbue The Gossip with a fiercely political streak, rooted in feminism and LGBTQ rights. There’s no better example of how perfectly this combination of danceable vibe, pissed-off energy and righteous purpose could come together than Standing in the Way of Control, the title track from the band’s 2006 studio album, their third. Bristling with energy and groove, this furious protest song was written as a response to the George W. Bush-era war on marriage equality. Charting strongly in the UK as well as being named by NME as one of the “50 Greatest Indie Anthems Ever,” Standing is widely regarded as their signature song, as well as their breakout moment.

Describing herself as a “fat, feminist lesbian from Arkansas,” Ditto soon became known beyond The Gossip as an outspoken advocate of feminism, gay rights and body positivity. She put her commitment to the latter front and center when she posed nude on the cover of NME in 2007, stating that her purpose for doing so was to “challengethe conventional imagery of women.” Ditto was unapologetically ferocious in her stage presence as well – early Gossip shows are the stuff of legend; YouTube is filled with clip after clip of Ditto commanding her audience, sometimes wading into the crowd in sweaty, steamy punk clubs clad only in bra and panties. In Ditto, a new generation of fourth-wave intersectional feminists found a fierce figurehead.

As Gossip (now having dropped “The” from their name) closed out the 00s, their music, though still compelling, became more polished and dance-oriented in the studio. It was no surprise that, after appearing as a vocalist on several dance tracks with other artists, Beth finally dropped a dance project of her own, 2011’s Beth Ditto EP. A laid-back electro-pop affair, the ep showed that Beth was equally adept at being a cool, late-night dance floor chanteuse as she was a punk rock firebrand. Additionally, she continued to broaden her areas of expertise in the early 2010s, launching a plus-sized women’s line of clothing, modeling for Jean-Paul Gauthier, creating her own collection for MAC Cosmetics, and releasing her memoir, Coal to Diamonds. She made strides in her personal life as well, marrying her long-time girlfriend in 2013.

With Gossip officially disbanding in 2016, many fans wondered not only when they’d see a proper full length release form Beth, but also what musical route she’d take. Our questions were answered, at least partially, when earlier this spring she dropped Fire, the first single from her upcoming album Fake Sugar, which, maddeningly, has been given a vague release date of “sometime in 2017.”

Fire seems to be a bit of return to form for Beth – it’s a boot-stomper of a number that starts with a solitary, moldering bluesy riff over which Beth prods us to “get up, up, up, up, up, up, up, if you want my, want my, want my love” – of course we do, and we’re compelled to do that getting up as the guitars layer on top of themselves and a whirling organ whips the track into a frenzy by the end of the three minute track. It’s an enticing taste of what promises to be a captivating comeback from a genuine force of nature who never really left our consciousness in the first place.