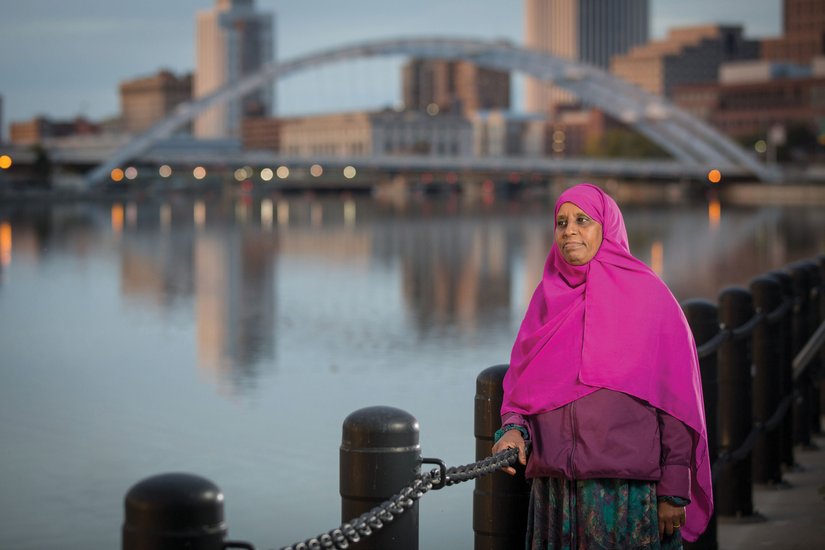 How does someone who has survived extreme hardship celebrate holidays? In Sadiya Omar’s case she teaches her youngest son the same lessons her parents did. “I always remind my children, although we pray in a different way, we are all created by one God. And we are all human beings, regardless of our backgrounds, how we look, who we are. There’s no special person; everybody’s special.”

Sadiya’s journey to Rochester is painful beyond words. When civil war broke out in Somalia in 1991, she, her husband and daughter fled to Kenya. Out of her family of eleven siblings, two of her brothers were killed and two are still missing. In the Mombasa refugee camp, thousands of Somalis built shelters out of sticks, coconut leaves and mud, living on small rations of rice and beans. Tensions between them and local Kenyans ran high. Sadiya had two more children and while pregnant with her second son, her husband was killed in Somalia where he had gone to fetch his mother.

When that camp was closed, Sadiya and her children moved to another camp where temperatures were often 120 degrees and they endured blinding sandstorms during the dry season and floods during the rainy season. There too, conflicts with locals festered. Girls and young women were regularly assaulted and few young women went to school. Despite being a widow with three small children, Sadiya became a leader because her father who had taught high school when she was little, had impressed upon her the importance of an education—even for girls. For ten years, her advocacy for women and girls earned her their gratitude and other’s enmity.

Even though she didn’t want to stop her work, the United Nations relocated her to Rochester in 2001. Because of her strong English skills, she became a certified nursing assistant and found work in a nursing home. Some residents who had never seen a Muslim woman in a hijab mistook her for a nun and gave her the nickname, Mother Theresa – as much for her kindness as for her looks.

In Rochester, Sadiya saw the needs among Somalis who had escaped the same horrors she did. Most knew no English, knew little about American life and had little money. Like Sadiya, who lost her second husband to a stroke, they mourned many losses. “And that’s how we started,” she said of the support group that eventually grew into Refugees Helping Refugees. “I think because of what other people did for me, that’s why I’m giving back to help other people.”

The Somali Community of Western New York (SCWNY) was founded in 2002 to serve Somali refugees, but expanded as other refugee groups arrived in Rochester. The 501c3 all-volunteer group of refugees and Americans working with refugees from many countries changed its name to Refugees Helping Refugees (RHR). About 65 students, 40 to 45 of them women, meet at Greek Orthodox Church on South at Linden. Sadiya, who now serves as RHR’s vice-president was honored for her work in 2014, when she was a Rosyln S. Jaffe Award finalist and she received a Farash Prize for Social Entrepreneurship; in 2016 she was the local winner of the ESL Jefferson Award; she was selected from 90 semi-finalists at the Jefferson Award Foundation’s annual event in Washington D.C., and selected as winner out of five finalists.

So how does Sadiya Omar celebrate holidays? With the students at RHR. This year on November 15, Foodlink will bring their food truck and students will use gift cards to buy food for Thanksgiving week. In past years, volunteers at RHR have cooked an American style meal. This year, they will have a potluck where people bring rice, pasta, vegetables, chicken or fish. A traditional favorite is sambusa, fried or baked triangular-shaped dough filled with beef or chicken, tuna, and vegetables, onions, garlic and spices. “Everybody loves it,” she said. “It goes like that!” Also, a volunteer has offered to give manicures to the women, who will also receive gift bags for which donations of shampoo, diapers and laundry soap are welcome.