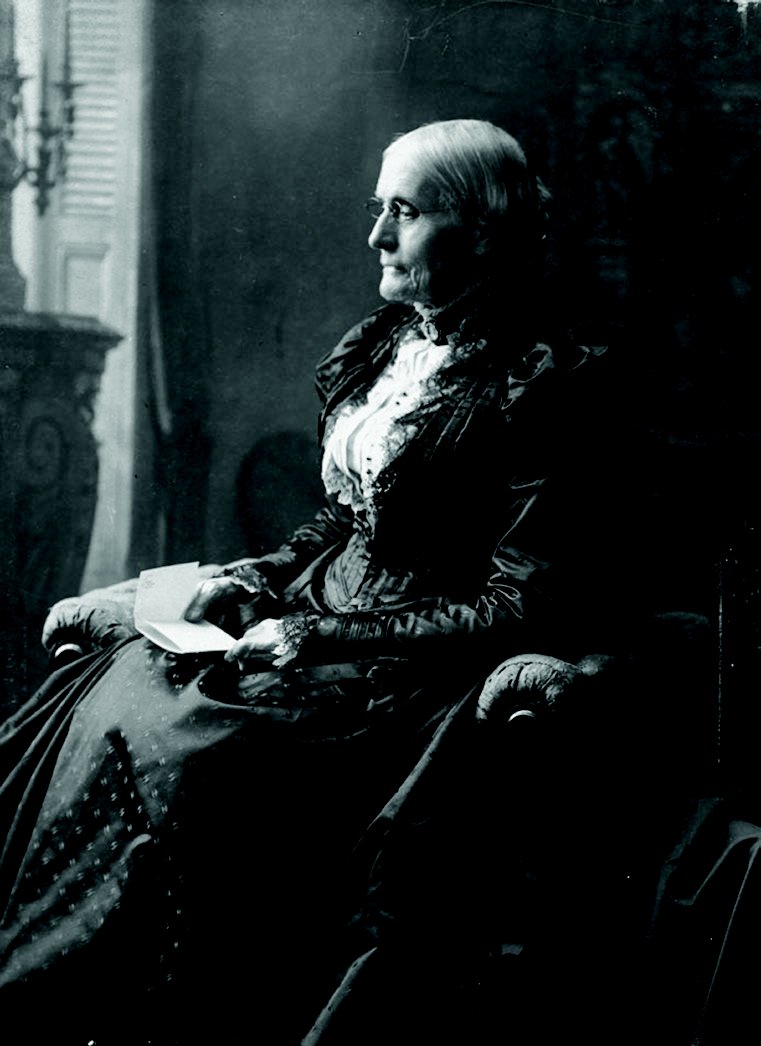 Images used with permission of the National Susan B. Anthony Museum & House

In the year Susan B Anthony was born, 1820, the United States was only 44 years old with 23 states, the Erie Canal was not completed, and nearly 16% of its population was enslaved. Married women – of any race – could own no property of their own or have a bank account.

Anthony was born in Massachusetts and then lived in eastern New York state from 1826 - 1849 spending several years as a teacher in Canajoharie where she was also active in the Abolitionist and Temperance movements.In 1849, she moved to Rochester to join her family, who had relocated to Rochester in 1845 after her father’s bankruptcy. By the time she arrived here, her father had become friends with Frederick Douglass who would become a life-long friend of Susan’s, too.

She also met other women and men who worked on both reforming basic women’s rights and abolishing slavery, including Elizabeth Cady Stanton.It became clear the road to success for these reforms depended on expanding the vote to all citizens, and Anthony’s primary focus became suffrage – the right to vote.

In 1866, Susan, her sister Mary, and their mother Lucy moved into the house at 17 Madison Street, now the National Susan B. Anthony Museum and House, where they would all live the remainder of their lives. It was a bustling home and often served as the headquarters of the national suffrage organization, led by Anthony and Stanton.

Over four decades Anthony grew the movement, accumulated allies, and repaired rifts, setting the stage for passage of the woman’s suffrage amendment that she knew would not happen in her lifetime.

By 1906 and Anthony’s death, ideas and laws had changed. Most states had enacted married women property laws allowing women to keep their earnings and to sue for divorce and for custody of their children. Over 30,000 women were enrolled in colleges and universities. Women were lawyers, journalists, doctors, and ministers - careers previously closed to them.

The 19th Amendment was ratified fourteen years after Anthony’s death. The words had not changed from when Anthony first introduced the legislation in 1878, but the world had. “The right of citizens of the United States to vote shall not be denied or abridged by the United States or by any state on account of sex.”

2020 marks the Susan B Anthony’s 200th birthday as well as the 100th Anniversary of the ratification of the 19th Amendment. The Anthony Museum’s spotlight project is Votercade 2020. Inspired by Anthony’s inspirational call to “organize, agitate, educate” and her commitment to carry her suffrage message to audiences across the country, Votercade 2020 will travel to five different locations in the Finger Lakes Region. Each event will feature a motorcade of vintage and contemporary cars, street theater, historic perspectives, music and art, audience participation, along with displays and interactive activities. https://susanb.org/celebrate2020/votercade/

For a calendar of other 2020 events in the Rochester area which celebrate the 19th Amendment Centennial or the 200th birthday of Susan B. Anthony, go to rocsuffrage.org.