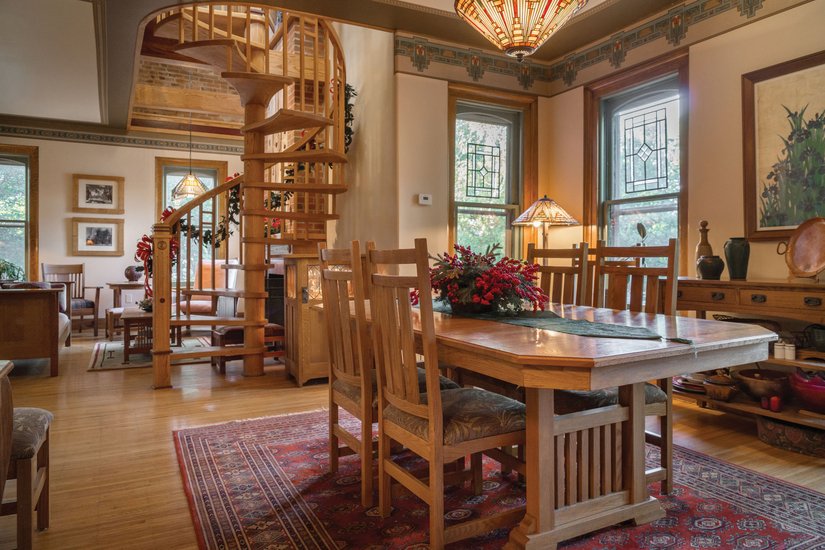 Using plat maps, deeds, newspaper archives, city archives, census and city directories it seems likely that David’s house was built around 1863 and 1864. Several of us worked on researching the house and received invaluable help from Michele Rowe and Mark Carden at the City of Rochester maps and records departments and archives, and Katie Comeau of Bero Architects. Hickory Street first appears in Rochester city directories in 1847, although the house next door to David’s was built in 1838 so there were residents living there before 1847.

In 1851, Horatio Farley bought lot #85 from Lyman Munger, the original property holder for much of the land in the South Wedge. Farley built a house on the land in that year (see the map at right from 1851) and lived there through at least 1853 according to city directories. It is unlikely that structure from 1851 is the current building based on the architectural details of the current house.

Between 1853 and 1862 the property was sold several times, but none of the owners were in residence apparently, according to city directories and deeds for this time period. There is a structure on the property on an 1858 map of the area but the corresponding city directories (1857 and 1859) don’t list a resident of number 36, which is the number of this house during that time frame. There are several residents listed as living on Hickory near South Ave or near School 13, or with no number at all, but they are not listed as boarders so it seems unlikely that any of them are at lot 85, number 36.

The first clear evidence of a resident on lot 85 again comes in 1864 when Jonas Henry Kocher lives there. He bought the property for $1300 in 1863 from Peter Cornell of Barre, NY. Kocher was a Freemason, and the Cross of Lorraine, or the double cross, is a symbol used in the 33rd (or highest) degree of freemasonry. An unusual architectural detail in the house which David discovered hidden beneath ivy is the double cross shown in the photo at right. Kocher’s gravestone at Mt. Hope Cemetery includes the Freemason’s square and compass symbol. Based on this information, it’s not a far stretch to speculate that he built the house, but as with many historical research projects, we may never know the full story.