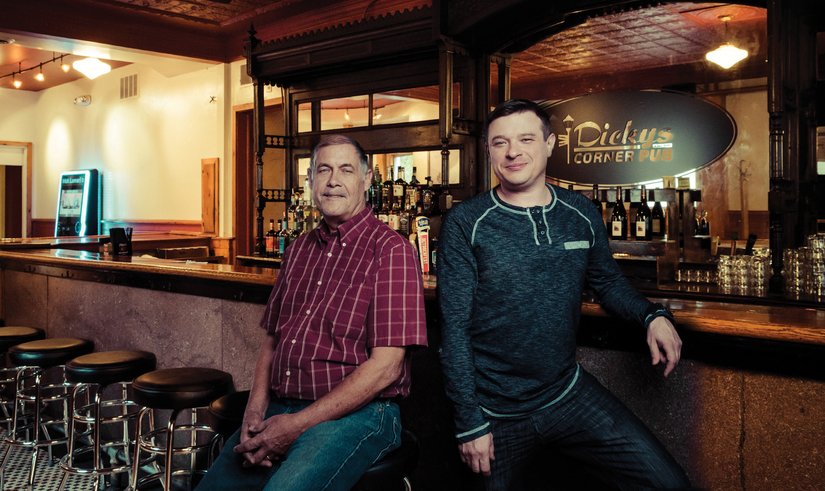 If you’ve walked or driven past the corner of Meigs and Caroline Street in the last six months, you’ve seen a major restoration project underway. Anticipation has been building for the reopening of Dicky’s Corner Pub since the announcement that Richie Salvaggio and his business partner William “Bill” Pieper would restore what is considered Rochester’s oldest bar. If you’ve peeked in or patronized the new establishment since their Grand Opening on October 13, you’ve seen a mix of the old and new: the gleaming, refurbished original bar imported from Germany, the 19th century spittoon just steps away from a brand-new digital jukebox, and maybe even Salvaggio behind the bar, where you could have found him as soon as he was old enough to serve alcohol, now presiding over the bar and restaurant his family began in 1949.

While the building’s construction dates back to the late 1800s, the Salvaggios’ history with the place begins in 1922, when Richie Salvaggio’s great grandparents Michele and Francesca Salvaggio purchased it. They leased out the site until Richard “Dicky” Salvaggio, Richie’s grandfather, opened the public house in 1949. The management of the restaurant passed from family member to family member beginning in the 1970s, including Richie’s aunt, Fran Salvaggio, and his parents, Judith and Michael.

It was in Judith’s kitchen that the menu grew to include 121 items, all homemade, fresh, and listed in a binder. She was known for her fish fry, French onion soup, and deep-fried veggies, but she made everything from scratch, down to the salad dressings and gravies. Judith was 100 percent German; her husband Michael 100 percent Sicilian. She combined American classic dishes with family recipes from both her and her husband’s family, creating a culinary collection astounding for such a small kitchen. How did she manage to cook and serve such a large variety of dishes? “She had six coolers in the basement. She was always running up and down those stairs,” Salvaggio said.

Dicky’s is bringing back about 20 of those dishes, combined with new offerings including gluten-free and vegetarian options. And Richie Salvaggio knows the menu; he started prepping in the kitchen at age 12, cooking by age 15, and serving by age 16. Before long he was behind the bar and ultimately managing the bar. Kelly Dean, who learned to cook from Richie’s mother Judith in the kitchen at Dicky’s, emailed him recipes from memory that will allow him to ensure the longevity of Judith’s home-style cooking.

“That’s why I’m doing this, to make her proud,” Salvaggio said.

Judith Salvaggio died in 2003. Dicky’s Pub closed in the 2000s, followed by several tenants, while the family retained ownership of the building. When the lease came due this year, Salvaggio approached Bill Pieper, the real estate broker who manages the property, about reopening Dicky’s. “We both said, ‘Why not?’” Salvaggio said. Salvaggio became assistant head of operations, while Pieper owns the business and serves as head of operations. Salvaggio will be bartending weekends, a familiar role.

Now Salvaggio and Pieper are hoping the neighborhood will be back at Dicky’s Corner Pub. “This is a very hot area, the South Wedge, with a lot of families and young professionals who would rather walk to someplace nearby than drive,” Salvaggio said. Salvaggio hopes new patrons and old timers who knew the restaurant under Judith’s management will be attracted to the restaurant for good food. “It’s about the food and how it tastes,” said Salvaggio.

The space also features a pool table between the bar and restaurant areas, allowing even kids to have a shot to get behind the cue ball. The wood paneling and posters from past years’ Lilac Festivals give the place the cozy feel of a cabin. They hang together with a framed poster-size print of the cover of Judith’s original menu.

Neighborhood residents who knew Dicky’s Corner Pub well agree that the food is the main attraction. “Food’s outstanding, always has been,” said local South Wedge resident Frank Tenbrock at the soft opening. “I was here in the old days when Richie was a kid.” For neighbors like Tenbrock, being able to stop by Dicky’s on their way back from work or meet friends and family there for dinner may feel a little bit like coming home.