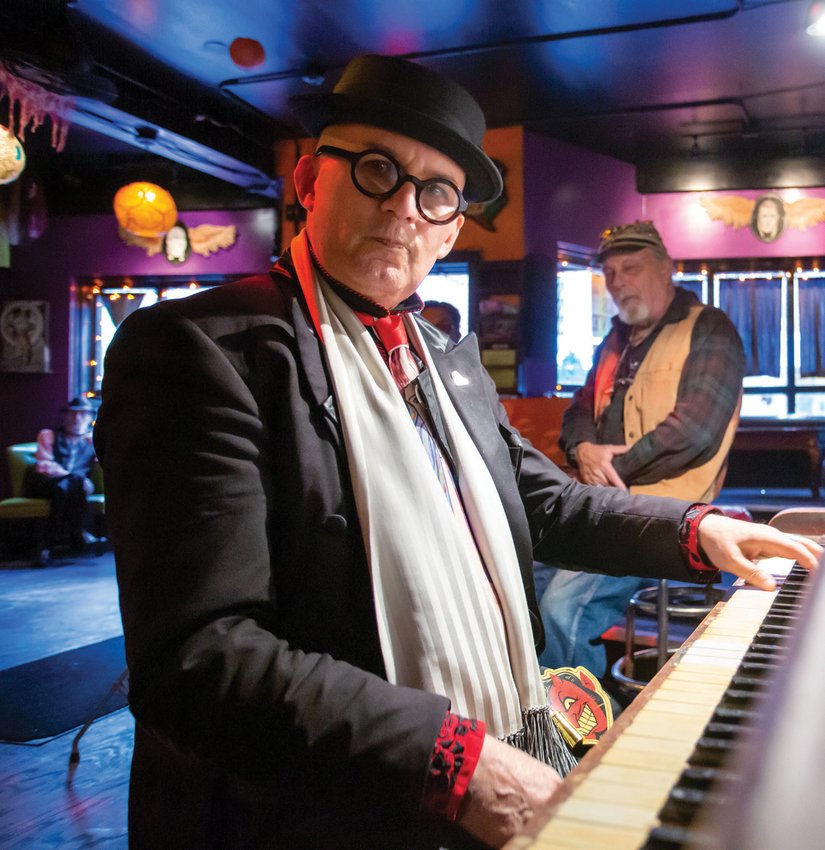 A honky-tonk bar is defined as a cheap and disreputable old bar or saloon commonly associated with ragtime music and the Old West. Lux Lounge, on the other hand, is a thoroughly modern bar and the watering hole of choice for Rochester’s younger crowd. Yet, last Sunday afternoon, a shocking transformation came over the South Avenue bar, the likes of which I’d never seen before.

Two men in wide-brimmed hats sat down in front of the old piano and began to play music. One of them introduced himself as Honky-Tonk Henry, and he proudly said he played a style of music from the dance halls of the 1890’s. He called it Stride Piano, but even if you haven’t heard that name there’s a good chance you’ve heard the music before.

“It’s the kind of music you’d hear in an old Western movie, the kind where the piano player has to duck because people keep shooting at him,” explained Daniel Sullivan, who was the other half of the piano-playing duo. His ring-covered hands clinked and glittered as he spoke and adjusted his oversized red sunglasses. “That’s honky-tonk music.”

“That’s where my name comes from,” chimes in Honky-Tonk Henry, a man dressed in the fashion of a 19th century piano player down to his lace tie and white jacket. “And we believe in it. We’ve got to bring it back… I find these songs have real meaning to them, even though they never said it outright. They were all sexy, they were all dirty, they were all kinds of things but they never said it directly in the songs. And now, after all these years, I’ve come to realize… those songs are the best!”

Honky-Tonk Henry and Daniel “Knuckles” Sullivan have captured the tradition of the saloon pianist and brought it kicking and screaming into the 21st century to great effect. Every Sunday, Henry and Knuckles will be performing at Lux along with various other instrumentalists. Talented musicians both, they often work in drums and harmonica in addition to their own considerable piano playing.

“I play a lot of originals,” Knuckles says enthusiastically. “And, I change tempo a lot. So it’s hard for me to play with a drummer, sometimes, and a harmonica guy, he’s coming too, because I do change tempo so much. Because, sometimes, I don’t even know where I’m going. And my hands just find a place to land on the keys and, you know, it just works.”

Surprisingly, live ragtime music from a hundred years ago is no stranger to the modern Rochester bar scene. Karrie Laughton, owner of Lux Lounge, claims the inspiration behind the Sunday shows comes from a home-grown source - Bullwinkle’s Cafe, a now-closed but forever influential Rochester bar run by local character Betty Meyer. It was a curiosity even for its time - old timey decor from the 40s, faded yellow photographs on the wall, and most importantly, the music. Live, often improv, and plucked from the bars of centuries past, Bullwinkle’s music was the star of the show. Patrons could walk in, grab a silly hat from a box, and sing and play along with the hired musicians.

“You come in, you have some cocktails, you grab a hat, and you sing along with the music. Or maybe you just bring an instrument of your own and hop in with them,” Karrie explained. “I want to make these shows an homage to Bullwinkle’s. I want to bring that feeling back.”

Henry and Knuckles, for their part, are excited to bring that energy and excitement to Rochester once again.

“We want people to sing along,” Henry says with a smile on his face. “We want them to be happy to be here. That’s all. Our piano playing involves everybody - the old people and the young people, so anyone can come in and enjoy themselves.”

“I’m trying to get as many people here as possible so that they can enjoy themselves,” Knuckles chips in. “That’s the point!”

Honky Tonk Henry and Daniel “Knuckles” Sullivan can be found tickling the ivories at Lux Lounge on South Ave every Sunday from 6 PM to 9 PM. Shows are free, and Lux patrons are encouraged to bring instruments, grab a hat, and play along with the piano.