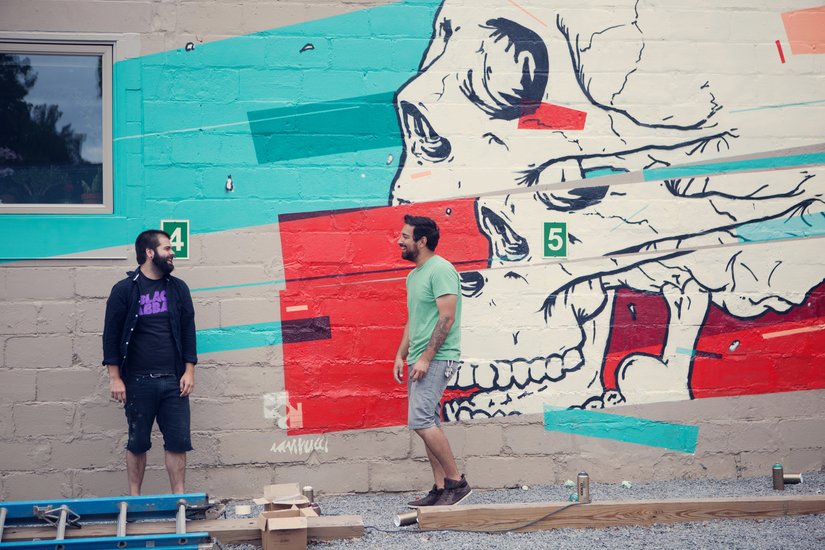 Curious wanderers near South and Gregory may find themselves lured into a hypnotic labyrinth of red and turquoise shapes behind the Fine Arts Theatre Building. A hidden gem of this summer’s Wall/Therapy event, the mural is actually a collaborative effort by artists, St. Monci and Justyn Iannucci. The work itself has two parts: one wall showcases Monci’s signature marriage of geometry and color, while the adjacent side features a macabre skull drawn with Iannucci’s unmistakable line work. The juxtaposition of styles – the humanistic upon the otherworldly – highlights each artist’s unique approach to line and space. The South Wedge Quarterly spoke with the two to hear their thoughts on collaborative art, different stylistic approaches, and the inspiration that can be found in an old greasy pizza box.

SWQ: Tell us a bit about your introductions to the art world.

St. Monci: For me, I guess it really got started when I moved to after I graduated from art school. I taught at MCC for a little while and did a few things here and there. Then in 2009 I linked up with Erich Lehman of 1975 Gallery who, in turn, introduced me to an incredible group of local artists and we started the collective, the SweetMeat Co. (consisting of Erich, Sarah Rutherford, Mr. PRVRT, Lea Rizzo and myself). We did a couple of large installations together and all have been showing and making things ever since. This core group has been instrumental in my own development as an artist.

Iannucci: My introduction to the art world happened in October 2011 when local Renaissance man Erich Lehman asked me create a drawing for a Halloween exhibition titled By the Pale Moonlight. I’ve shown work regularly with 1975 since then. Some early things that drew me into art were drawing with my grandmother, comic books, album covers and any kind of commercially printed graphics I could absorb. It’s weird; when I was 8 years old I saved this Pizza Hut box with this beautiful one-color Darth Vader graphic on it. Grease stains and all, that’s pretty much where I’m at.

How did you two first decide to collaborate together?

We had talked about collaborating for a long time actually, but it just never happened. Then this wall presented itself and we decided, “Why not work together for the first time on this huge wall, during Wall/Therapy, while the entire city is watching?”

It just kind of worked out that we had this amazing platform to work with. I would like it on the record that Ron Maier, Ian Wilson and Erich Lehman are incredibly kind people, and thank you for giving us a chance to make this happen.

Describe the other person’s style. How does it complement or contrast with your own approach?

At first glance you wouldn't think our respective styles would work collaboratively. Justyn's work is very illustrative and has a sort of sophisticated crudeness to it that differs greatly from my tendencies to be clean and precise. These differences obviously create an interesting tension in our collaborative work but there are also underlying qualities to Justyn's work that help create a sense of harmony when we join forces. Although he works with more representational forms, Justyn has a great sense of design. His ability to create narrative with, at times, limited information is a testament to his basic design and composition skills. I think our combined interest in design and composition really brings together two styles that are otherwise very different.

Monci’s work is like seeing a Russian Constructivist that found a way to jump 40 years in the future, land a design job at an advertising agency, and sneak out these beautiful collages in between the endless march of cereal packaging layout comps. I’m drawn most in to the work by tension he creates, the color palettes used, and the overall graphic aesthetics. I think that Monci’s graphic shapes and lines complement and contrast well with my work because I don't use a lot of hard edges or 90 degree angles. It’s fun to make a drawing work within the constraints that are first made -- it kind of feels like I’m completing a puzzle. There are also a lot of subtle value shifts in Monci’s work, something I don't normally consider as an option when drawing.

How do you approach this type of collaborative project?

We'll both toss around ideas for content and format and then I'll usually lay down an initial set of forms that Justyn will later work more representational forms into. We'll usually go back and forth building on what the other laid down previously. It's all pretty organic and intuitive.

As far as content goes, we will both go over and loosely sketch what’s going to be in the work before any paint is applied. Aesthetically, Monci definitely has to start by blocking out larger abstract shapes and lines. His work is formed very organically, reacting to the composition as it progresses. I have a similar mindset, but based in representational forms.

How much different is this process than working solo?

I've always encouraged collaboration and I've collaborated with a lot of different artists. While it's fun and exciting to share and exchange ideas with someone you admire and respect, ultimately, collaboration is the best way to learn about your own creative processes. It also forces you to be flexible with those processes. When I work solo I only have myself to respond to. Working with Justyn breaks my normal work flow and I can take time between steps and see new things that I may not have seen on a solo project.

Working with Monci is great! He’s really mindful of my weird art peeves and pretty much taught me how to paint with a can on site for the mural. Monci has always been beyond resourceful and helpful to me while starting down my own creative path. For me, collaboration is an opportunity to step out of my own stubborn notions of how to complete a work of art and place myself in another maker’s perspective. I end up with a different, but stronger approach to creating.

After the Wall/Therapy event, you two worked together on some smaller pieces for the five year anniversary of 1975 . How did these pieces build on the initial mural?

For the 1975 pieces, I'd say the biggest difference was the time constraint. The mural was really the first time we had collaborated and we pretty much finished it in a day. It sort of served as a sketch for the sort of things we could do together. It is kind of funny that something at that scale and on that sort of stage was really our 'trial run' for what we might do in the future. We were able to build on some of those ideas and really tighten up our work for the 1975 pieces. The more pieces we do, the more we learn about each other, and the potential of the work.

These went a lot quicker and were a lot more forgiving. We pretty much had one shot to get the wall right. The smaller pieces didn't have the passing spectator pressure when painting outdoors, so in that aspect it was very relaxed. It’s also nice to work on your own creative schedule.

Any plans to work together in the future?

We might have some more things in the works...

I don’t want to spoil anything, but you can keep an eye out for something soon.