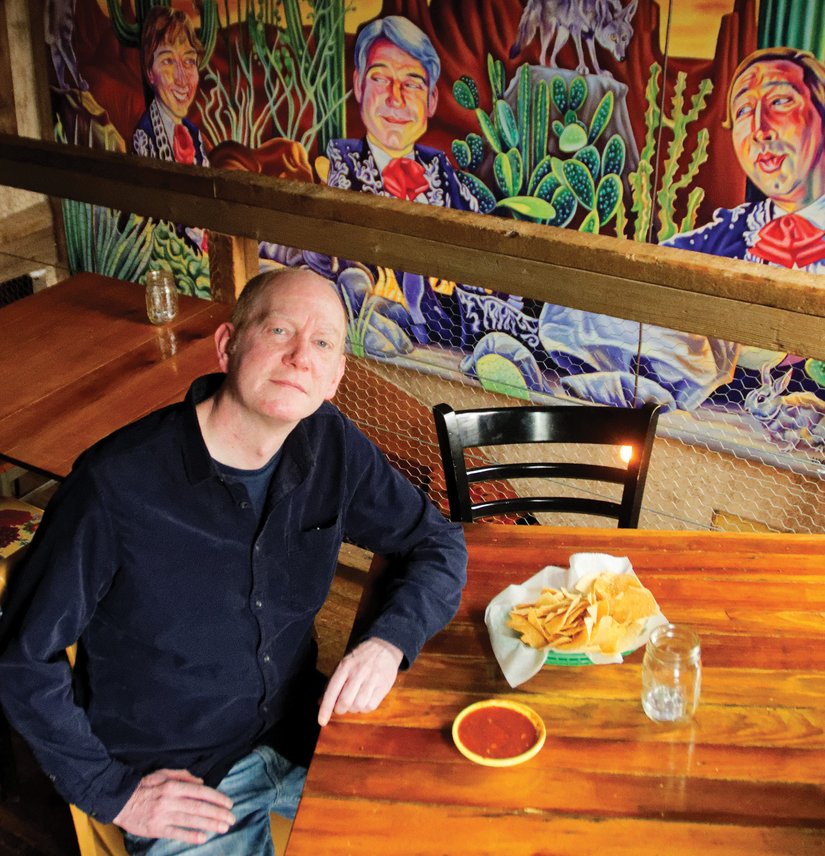 I think if you took a peek into the mind of Jay Lincoln (RIT Professor and Artist), you’d see a swirling kaleidoscope of vivid color— distorted hues rippling into one another with their own brand of vibrancy. You’d be slightly disoriented but completely enraptured as you are swooped into the prismatic space that was born the minute that he was. But if you peered deeper, there’d be a little shadow, a space reserved just for him that he’ll show you once he’s damn good and ready.

He says that he’s the kind of person that likes to do one thing really well and that the thought of painting actually intimidated him. It took some coaxing for him to be able to pick up the brush and give his canvass its first breath of life. We’ll pause here for a second so you can soak that in…

Jay moved around a lot in his childhood. His mother was an art teacher but rested her tools to raise her children. His father owned a forklift dealership and the family followed him as he moved up the ladder. He was born in Connecticut, lived in East Aurora, NY, moved to New Jersey, Michigan, California, Buffalo proper, and then to the South Wedge where he settled into his cozy Jay cave nestled between a time line of gorgeous art pieces and his humble little studio.

You’d expect his studio to be bursting with color with retired paint spatter resting in the corners. But it wasn’t. Four walls, a radio and a naked canvass waiting for its denouement. Jay says while he paints, he listens to whatever fits his mood; Radiohead, Pink Floyd. Sometimes he may think of a chant he brought home with him when he visited a 750 year old buddhist monastery in Japan with his mentor, Philip Burke (an artist from Buffalo).

It was Philip who gave him the push to put down his colored pencils and choose a new weapon. “I was afraid to paint with oils. I gave him all the usual excuses like it was messy, or I don’t have enough space. So he called me out on it. He said, ‘alright, so… let’s start painting then’”? says Jay of Philip.

Jay listened to his mentor and did what he was asked. “I had such drawing skills that the paintings were actually quite easy and instead of doing little drawings, I was doing huge paintings. So I guess I consider myself a painter. And now recently I’m dabbling… going back to colored pencil, trying out watercolor, plein air painting. I did the tarot deck.”

The tarot deck was one heck of an enterprise but we’ll get back to that in a minute. First let’s brush up on his caricatures. You might have seen some hanging around at Nosh, Boulder, Lux (that mural on the brick wall was done courtesy of Mr. Jay Lincoln) and most recently, his largest work to date can be seen at La Casa. A whopping fifteen foot replica of Martin Short, Steve Martin, and Chevy Chase, laying out tunes as the Three Amigos. While his paintings seem to grow larger, his beginnings were as humble as the illustrator himself.

“In the early days I was a starving artist, I was just sort of eeking by. I worked for my father for six months and that was plenty. I was a freelance illustrator for years, doing national magazines. The reason I started teaching at RIT, is because I broke my wrist rollerblading. I was actually kind of fucked for a minute. I called up my old professor and asked if I could have a job. I think because I had a steady income with teaching money, I had the luxury of not hustling on the editorial stuff. So instead of doing stuff for publications, it was more about local… just painting friends around town. Learning how to paint, basically.”

“I was really proud of the mural I painted at Lux. That was a big undertaking. Climbing up the scaffolding. Acting with nature. The rain. The weather. I’m just using little brushes painting a brick wall. That’s tricky to get the illusion of a straight line. I’d go there and paint all day, then the bar would open and I’d just stumble in. I guess now I’m going to be the guy who made the tarot deck…”

Indeed, one day Jay had put down his paints and picked up his colored pencils again. He had an idea to draw local faces and turn them into tarot cards. This simple idea turned into a 15 month intensive project featuring 108 people, every card as unique in their symbolism as the person that is featured. He had always had an interest in tarot and figured what better way to study then to spend a few days drawing out in detail, each and every card.

“A lot of them are Lux people. I was just grabbing people. Every day, I’d wake up and draw a tarot card.”

We flipped through his book of original drawings for the deck and stopped at the page where Chopstix stood immortal in her patchwork skirt. I touched it lightly, thinking of her. The Star. “How fitting,” I told Jay. He tells me that he felt her presence when he drew it. I had no doubt that he did.

Jay is in a state of reinvention right now. Moving from oil paintings of musicians and actors to commissioned portraits, to watercolor, open air painting, and board games. Yes… boardgames. Ask him about it sometime.

“Now that I’m getting older, I kind of just want to do what I feel like doing. Whether it be board games or whatever. Whatever’s in the air. Just use intuition I guess. You got to pay the rent. I’m blessed in a way that I can dabble and have fun.”

Dabble on, Jay. We’ll be here to receive everything you want to give us.

Prints, news, etc. can be found at www.jaylincoln.com