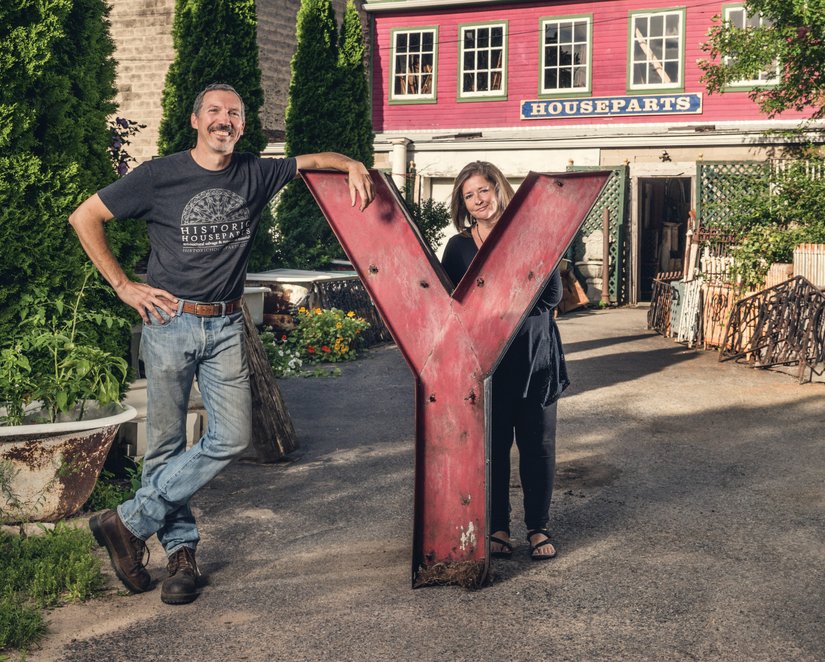 Talking with Chris Jones and Jim Wolff, owners of Historic Houseparts (540 South Avenue), it is clear that they have a passion for preservation, for the South Wedge neighborhood that they have lived in for over twenty years, and for finding ways to combine both of those passions to keep the integrity and historical value of this neighborhood intact. Knowing them as friends, I know they also have a passion for a great craft beer and a quality cheese board. I sat down with the both of them in their newly renovated backyard oasis to discuss Historic Houseparts and the value in paying homage to the history of a home.

Chris and Jim first moved to the South Wedge in 1991 when they purchased a distressed duplex on Averill Avenue. When they weren’t both working at Park Avenue Photo, they would spend time hunting for treasures to renovate their new home on the cheap. This included driving their truck around and curb picking, and also weekly trips to Historic Houseparts. “We used to go there every Saturday, it was our favorite place to go shopping,” says Wolff.

Upon hearing that owner Karen Caulfield was closing up shop, Jones asked if they could purchase the business. “I said no, we’re not buying this business, and here we are 25 years later,” says Wolff. “Our moms cried,” says Jones, and not out of happiness. Back in 1995 the neighborhood was a far cry from its current state - there were more closed businesses than open ones. Jones and Wolff went through an Urban League program for startup businesses and were able to secure an SBA loan to purchase the business and inventory.

Karen and Mark Caulfield had established Historic Houseparts in 1978. The Caulfields were renovating properties in the neighborhood and had been accumulating the parts from these homes and reusing them in other properties. They realized there was potential for a business in this salvaging and reselling of usable parts.

Says Karen, “In 1978, Mark and I were renovating homes in the South Wedge. Instead of getting rid of all the doors, heat registers, hardware, etc., we were scrounging whatever we could to reuse it and had accumulated a collection of vintage architectural salvage. On a trip to Atlanta, we were talking about ideas for a business I could start. We visited an architectural antique shop in Atlanta and it all fell into place. We started the store in the storefront where Premier Pastry is and were open only on Sundays. Our first day was the day after our first anniversary and we had a major anniversary/housewarming party for our house at 515 South the night before. It was a rough opening day.”

The Caulfields purchased the three story brick apartment building where Historic Houseparts now resides from the city for $1 in 1979, moments before it was to be demolished. Built in 1890, the building originally housed three apartments, one on each floor.

After a few years, the inventory began to outgrow the space at 540 South Avenue and they purchased the large warehouse in the back and renovated the small warehouse directly behind 540 South Avenue. The building next door was eventually purchased to expand their antique and new plumbing inventory, The Period Bath Supply Company and Apothicaire, which offers natural and organic bath and body products. They now offer over 20,000 square feet of merchandise, most of it antique but with an extensive selection of new hardware, plumbing, and lighting all with a vintage vibe. Jones has put in the exhaustive work of making sure that much of their inventory is online, teaching herself how to build a website back in 1997 when the internet was a buzz word and we were all listening to those sweet sounds of dial up. “We’ve been at about 65-70% online sales now, it’s been steady like that for years,” says Jones.

Having a strong online presence has allowed customers from all over the world to purchase items for their renovation projects, including shipping basically an entire kitchen to Japan. Celebrities like Kate Winslet, Matt Dillon, Chris Martin, Oprah, Susan Sarandon, Maggie Gyllenhaal and Peter Sarsgaard have all purchased from the store. Their inventory is basically a set designer’s dream and you have seen pieces from Houseparts in many films and shows including Boardwalk Empire and 30 Rock.

Some items, however, are not for sale. A set of vintage YMCA letters (procured not without injury) from the old Maplewood YMCA sat out in front of the store for years, but were not sold due to personal or historical significance. “I would rather have them in the store so that people from the neighborhood can come and look at them - stuff that has a lot of history to it and people like to hear where it came from,” says Wolff.

Set to celebrate 25 years of ownership, Jones and Wolff aren’t slowing down anytime soon. They are both active in the Business Association of the South Wedge Area (BASWA) and Jones has contributed significantly to having the South Wedge recognized officially as a historical neighborhood. All of that, combined with their own home renovations, I would say they deserve that craft beer and cheese board.