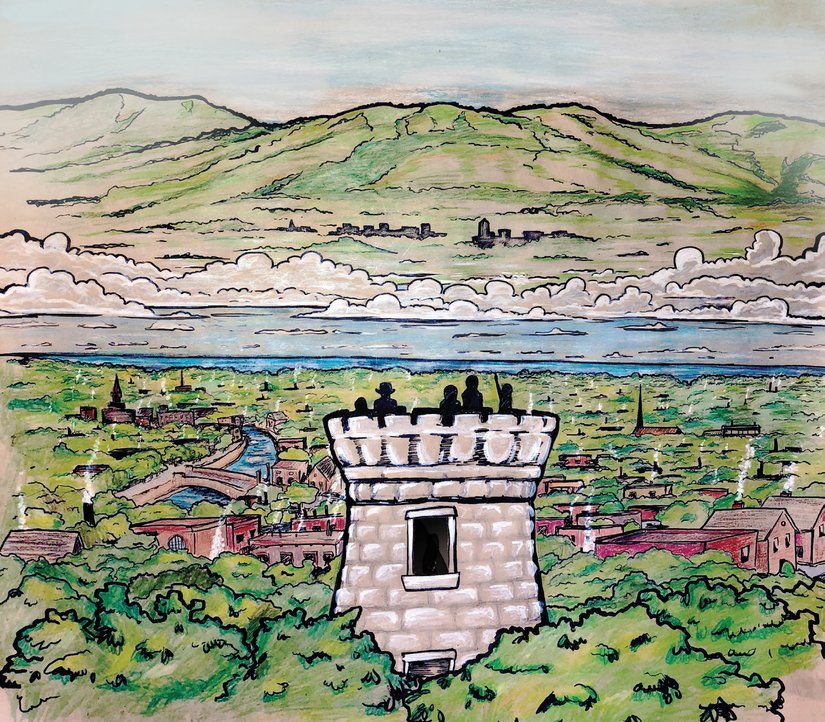 While the usual paranormal or supernatural occurrences tends to happen when the observer is seemingly alone at home or on a dark poorly lit street, there have been cases that break those molds. Times that not just a couple witnesses experience it, but in this unusual legend most of the city of Rochester was graced with a hauntingly extraordinary experience. One that lasted all day and has yet to fully be explained. On the exceptional clear Sunday of April 16th, 1871 the city was buzzing with news of something that appeared without notice in the northern sky. Friends and neighbors began shouting to one another in hopes to confirm what they had heard, and to see if they could see it for themselves. They climbed to their rooftops straining to look above the trees that filled the blossoming city. Rumors where that along the northern horizon, peaking over the lake, what appeared was a whole new landscape. At one point in Mt. Hope Cemetery, America’s first municipal Victorian graveyard stood a towering stone structure known as The Fandango. Located on one of the tallest hills, this was an observatory where guests, for a small fee, could ride an elevator to the top to take in the views. From the sea of green trees to the south, looking to the west the mighty Genesee river, following it north you could see it wind through the growing city of Rochester, and in the distance reportedly you could see the line of Lake Ontario. Word spread throughout the day of an unusual story, of a phantom visage peaking just at the far distant edge of view. This tower became the spot to gather and truly see the phenomenon in all its splendor. It became clear to the thousands who ascended the stone tower that they were witnessing something unusual. The witnesses claimed that what they were seeing was indeed not Rochester at all, but instead found themselves able to discern the opposite shore of Lake Ontario in striking detail. The hills, forests, and some Canadian buildings with its landmarks were all somehow identifiable to the naked eye. Various individuals were able to point out key structures despite their actual distance of over 60 miles away. As the Sunday morning churches finished, the groups of parishioners found themselves at Mt. Hope for a chance to see the new horizon that had appeared just above the treeline and the little sliver of Lake Ontario. The phenomenon lasted for that single day, and still, the spectacle of the Rochester Mirage remains relatively unexplained. While no one is quite sure how this larger-than-life phenomenon happened, especially with such a vast distance, atmospheric scientists have offered one possible explanation. There is a term for an optical illusion caused by extreme atmospheric temperature inversion, which under extremely rare but perfect conditions light bends in such a way as to make objects far beyond the horizon line appear both visible and magnified. The term is a Fata Morgana, it’s an unusual and remarkably complex mirage that is usually seen in a thin little strip right above the horizon. It happens when the air, which is generally warmer at the surface and cooler up in the atmosphere is flipped. Sailors and people on shore have reported seeing repeated images of ships on the horizon where there is a reflected image *above* that ship. In some instances, repeating themselves top to top, bottom to bottom. But the problem is that mirages such as these significantly distort the objects on which they are originating from. Scientists agree that in these circumstances the object is completely unrecognizable. Adding, the effect is relatively short-lived. So, what could have an entire city able to stare at a far distant coast for the whole of a day? If it was a Fata Morgana, then it’s larger than any science has ever recorded. With a temperature and size variations that would need to be strong enough that the curvature of the light in the air is more so than the actual curvature of the Earth itself. Even then it can’t fully explain the magnification needed make out the reported details. We hope that if it was the case, then it could happen again, and with mobile phones, we might one day get a chance to experience it yourselves. As a Postscript, in case you were wondering, this event is where the business of a similar moniker got its inspiration for naming.