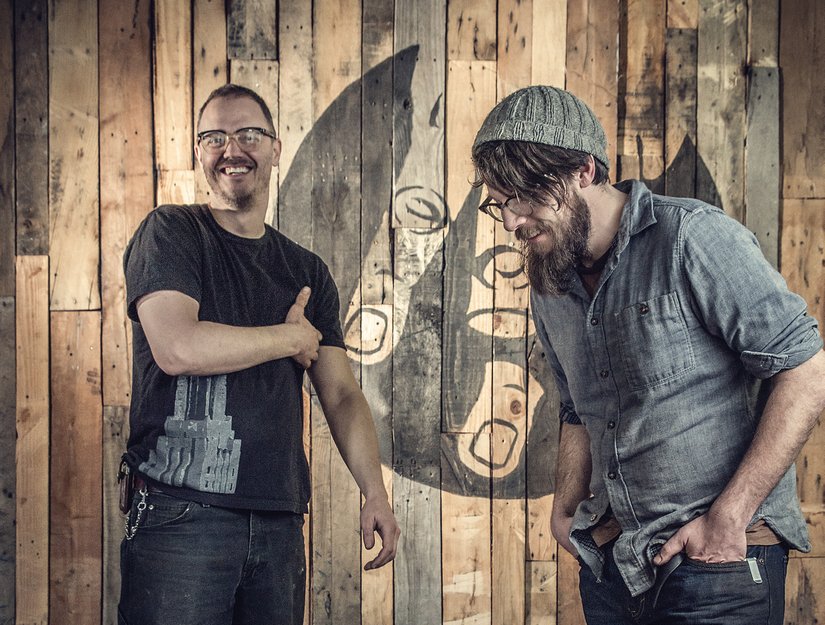 VISITORS to John’s Tex-Mex may notice a whimsical touch on the newly installed fence surrounding the restaurant’s patio—taco finials. This is the work of local artisan duo Clay Leiberman and Matty Sonar, owners of Metal Some Art.

Owner John Roth contacted Lieberman when he needed to replace his fence, and was surprised by an added element that is part of a “favor duel” between the two longtime friends. “His railings were rusted through and I told him we’d fix them up in exchange for one of his favors, and we did the tacos on top because we were missing a few finials,” explains Lieberman. “It’s a taco, and you recognize it in its context, but it’s filled with things you wouldn’t eat, but they’re also kind of fun. You can actually stand there and identify all the little pieces and and parts that make up the ‘taco meat’.”In return, Roth, also a woodworker and owner of South Wedge Wood, designed and made display boxes for Metal Some Art’s popular handmade belt buckles.

Both metal workers, Sonar for 12 years and Lieberman for nearly a decade, the two began collaborating seven years ago. At first they focused on custom work such as signage and furniture and eventually, in the interest of creating something small enough to ship and take advantage of the Internet marketplace, Lieberman struck upon the idea of creating belt buckles. Through trial and error they came to a design that worked. “We’re not totally artists, not totally businessmen, we’re somewhere in the middle,” says Lieberman. “Which is a really interesting and, I think, worthwhile, place to be.”

The two now manage an Etsy shop to sell their buckles where shoppers can choose from more than 200 different images, 3 different metals and 4 different sizes. Metal Some Art also works with customers to create custom belt buckle designs. Those interested in a more tactile experience can visit the studio in The Hungerford, where you can peruse the duo’s other items such as anatomical heart necklaces, sculptures, lamps and metal plate-covered journals. In addition, Metal Some Art still designs and creates custom furniture and signage, such as the large wood and metal sign recently installed at Mullers Cider House.

In the past year Lieberman and Sonar have increased their presence in Rochester’s local arts scene, taking part in a slew of art shows and festivals, including the South Wedge Harvest Hootenany, Mayday Underground, Artists Row at the Public Market and the Clothesline Arts festivals. The latter two were juried shows and Metal Some Art received awards at each.

They hope to expand the business in the future, taking on additional team members to teach them the craft of metalworking as they were taught. “It’s a means to an end ultimately, but at some point we want to have a storefront or our own building,” says Sonar.