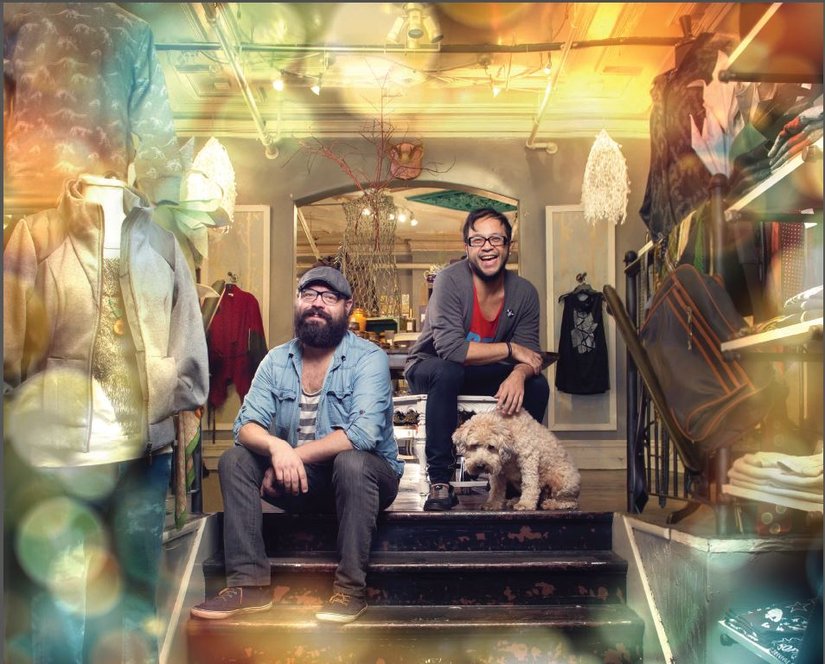 Why did you want to open a clothing store and why did you choose to do it in the city and specifically the Wedge?
Mike: Before opening thread I had worked in other clothing stores; both independently owned boutiques and retail stores. My friend Sandy, who I opened thread with, and I were both at a point in our lives where we wanted something different and we decided to open thread. I wanted control over the vendors we stocked, the displays we did, what music we played, etc... The South Wedge seemed like the best fit for the shop. When I was in college at RIT I use to come hang out in the wedge at Lux, Godivas and Analog Shock. The neighborhood had a cool vibe and seemed like the right place for thread.

Johnny: I wasn't involved in the final decision making process of the location but I clearly remember scouting the old Glover's Barbershop with Mike and Sandy. I immediately fell in love with the space. I knew that Mike and Sandy would be able to manifest something really special and genuine, so after seeing the space I knew that they had discovered the foundation of something truly amazing. My love for the wedge wouldn't come full circle until many many years later when i returned to .

What's been the biggest struggle running a business in the city?
M: Getting people into the shop. When we have traffic we do well, but when the weather is bad people tend to go to indoor shopping centers or shop online.

J: I think the biggest struggle with running a business in the city is creating balance between keeping the store progressive and interesting, while maintaining my vision and perspective. is a city with a definitive point of view and the South Wedge in particular has a unique voice. It's a challenge to maintain a sense of self when you're surrounded by so many different perspectives. It's so easy to lose your vision as an artist. In the wedge it's especially easy to lose your way because you're surrounded by so much creative energy. The reception and support from the wedge has made it easier to run a business but more importantly it's made it more special.

Does your store have an online presence? What proportion of your business comes from online sales?
M: We have an Instagram, Facebook, Tumblr and Twitter as well as our online shop. We don’t do any print advertising, so all of our sales and promotions can be found on our social media sites. We also post photos of new arrivals on all of our social media. A very small percentage of our sales come from the online store. We've never had a lot of luck with online sales.

J: We do have an online presence but the majority of our business is done in the wedge. thread is an experience, it can be personal and intimate as well as raw and raunchy, it just depends on the day. While we focus on our online presence I focus more on what happening at the store. It's really visceral for me.

Are the lines of clothing and accessories produced by local designers?
M: We carry a lot of locally made clothing and accessories, though not everything is made locally by any means. Some locally made clothing companies we carry are Attain, JBRD, Holly Hue, Grimes and Riot Amerika. We also carry accessories from Interstellar Love Craft, Knotty Owl, locol, Made by Rachel and Second Seed. We love supporting local designers when their designs mesh well with our aesthetic.

Who does the window displays for thread? Where does the inspiration for the designs come from?
M: Courtney, Johnny and I do the windows, though we frequently get assistance from local artist Nancy Topolski. One of us will get an idea and pitch it, then we will all collaborate, or one of us will take the reins and do it all themselves; it depends on the idea. The inspiration comes from anything and everything. The current window was inspired when I found some giant thistles while visiting my Aunt in . The thistles were growing along the sides of the country roads; they were so tall and strange looking! I cut a bunch down and brought them back to and then spray painted a few of them bright colors to make them stand out. I think they create an interesting setting for the window.

J: We work with local artist, we use local art pieces, we design local art, and it’s always been one of thread's main goals. Our window displays and the entire aesthetic of the shop normally unfolds in a completely organic process, but the masterminds behind the windows change every time. Some times I get inspired by an idea Mike or Courtney will have and it'll grow into something completely different and sometimes it's grows into exactly what i envisioned as well. Some times I’ll have an idea and completely run with it from start to finish. It’s a completely different process each time but we always manage to create something truly memorable and emotional. When it's your vision and your statement It becomes a cathartic experience. I'm really grateful to be able to do what i do.

Is running thread your only job?
M: No. I have had a full time job at Pictometry in addition to thread for the past six years. I currently manage a team of people that work with geospatial aerial imagery. I also create accessories, clothing and candles under the moniker “locol” that sell at thread as well as Arenas florist and The Nitty Gritty Salon.

J: I'm at thread 2 days a week and I work with my sister who just opened her own little girl's store in Victor. It's been a challenge giving up certain amounts of control but it has changed my perspective as a business owner. I love working with my sister and I wouldn't trade it for the world. She's helped me be a better business owner, from her perspective we are all in it together until the end, that family mentality. It's more intense and honest working with family members. It’s an atmosphere that nurtures growth and creates really tight bonds. It's my second favorite job of all time.

Are you both originally from Rochester? If not, what brought you here?
M: I am not from . I grew up in , which is about an hour and a half east of here. I use to come hang out in when I was a teenager and really liked the city. I moved here when I was 19 to live with my friend who was attending college and ended up attending RIT to study photography.  When I graduated from RIT I decided to stay in .

J: I was born and raised in LeRoy NY, the birthplace of jell-O. My family escaped the war and a catholic church relocated them to LeRoy, where we lived in an old convent. My Mom and Dad came over with nothing but my 6 older siblings. I was born the next year and 2 years later my younger sister was born (we are all 2 years apart). My dad worked at various random jobs that didn't require much English and my mom stayed at home with the kids. My college career took me to FIT in NYC where i studied Menswear Design, UB where I studied Advertising and Communication and finally RIT where i earned my MFA in Graphic Design. My parents relocated to Aloha, in 1998.

What is your education/ work background?
M: I have a BFA in Professional Photographic illustration from RIT.  I have had jobs in photography and retail since I first started working. I use to work in an independent photo studio and have been a photographer for a few papers including City Paper. I started working retail at an independent boutique called Midnight Sun in when I was still in my teens. After college I worked for Zumiez for four years and ended up being promoted to a store in .  I hated and how corporate the store was there and ended up moving back to to open thread.

J: I've been a freelance artist since birth. After RIT I taught Graphic Design at Roberts Wesleyan and then I was asked to brand thread. That's where I REALLY fell in love with design. This was when i really started to defined myself as an artist. I created thread's identity campaign and the rest is thread history.

Do you live in the Wedge?
M: I’m not sure if I technically do? I live on but down near the . I feel like I live in the wedge because I am there so often!

J: I currently do not live in the wedge, but I’m currently looking to move there! So if anyone knows of any place, let me know!

How do you know Teddy Coffey? That must have been cool to see him perform on SYTYCD.
M: Our employee Courtney use to babysit Teddy when he was younger. He has come down to the shop a few times to visit and ended up modeling some clothing. Courtney was really excited for him to be on the show, and if you’ve stopped into the shop at all over the past few months chances are she has shown you a video clip of him from the show…

J: I met Teddy Coffey through thread's wonder woman Courtney. Courtney is a very close friend of Teddy's. She introduced me to him a year ago when he was just a little tiny teen, and a year later he's a BIG teen. He came into thread dancing. Teddy had just finished filming a dance video with her. Courtney played some Janet Jackson and he danced like he knew he could dance! A year later, I’m designing pins for Teddy, inspired by the Janet Jackson 'Control' album. Courtney's been able to see him live several times but only because I covered her shift.

What's a typical Sunday like for you?
M: I work the night shift at my full time job and I start my week on Sunday, so my typical Sunday is sleeping in, maybe getting brunch if I'm up in time, and then heading into work from 5pm-1:30am. For thread Sundays are hit-or-miss.  Not many other businesses are open on Sunday so it can seem pretty deserted in the wedge. We started staying open on Sundays quite a while ago and have found that we will have some slow days here and there, but overall we have way more good days than bad ones and it’s worth being open.

J: Sunday is my only day off, so there's absolutely nothing typical about Sundays. Some Sundays I'm actually at thread!

What are some of your favorite things to do in the South Wedge?
M: Having dinner and drinks at Bonzai – the crispy tofu buns and fresh prince cocktail are my favorite way to start my night.
Checking out the housewares and artwork at Abode.
Getting cocktails at , especially when it is warm enough to sit outside.
Sitting around the fire pit at Lux with hot cider.