Back to Health & Wellness 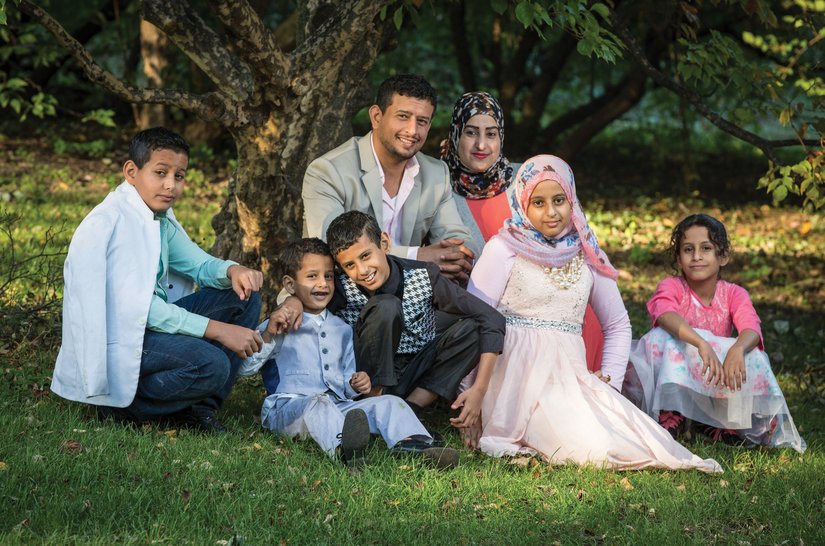 Nabil Shaibi and Nassim Salem’s South Wedge home buzzes with energy. In addition to their 5 children, ages 4-14, and two additional teenagers under their care, the house is often filled with many others from the South Yemen diaspora.

Nabil came to the US in 1997 when he was 15 years old, following his father and older brothers who had businesses in Rochester. He attended high school in the City and picked up English quickly. During his teen years, he made several trips back to South Yemen to visit relatives, and it was during one of those trips that his father arranged for him to meet Nassim, a sometimes shy, always witty girl from a neighboring village. As is the custom, they were married 3 days later.

“My father brought me to the United States so I could have a better life. When we had children, I wanted that for them.” Nabil continued to make his home in Rochester, flying to South Yemen as often as possible to see his wife and growing family and making plans to bring them all to the United States. This process took years, but his determination paid off when the whole family arrived to their South Wedge home in September 2016. “I’ve been in the South Wedge since 2005. I’ve lived in other parts of the City, but I always liked the South Wedge. It’s quiet here but close to downtown and close to everywhere.” He continues to work very hard on his family’s behalf. He just started an expansion and improvements on his store, 999 Market, to make room for new coolers and more produce. “I would like to do more in the neighborhood, but I work all the time.”

Nabil may be too busy to explore the neighborhood, but the Shaibi children are making it their new hometown. They ride their bikes and scooters between home and 999 Market. They visit the Ellwanger Barry and School 12 playgrounds. On hot summer days they go to the library to use the computer, play with the toys, and check out books in their new language. At the end of August, they went to the Greek Festival every day, and 4 year old Haroon even joined in on one of the Greek traditional dances. “The kids love it here. They can play and go anywhere and they are safe,” Nabil says. When Nabil talks about his children, he shows obvious pride and the usual exhaustion anyone caring for seven children might feel. They are becoming American quickly, and this pleases him. “I don’t want them to feel different from everybody. I want them to feel the same and get along with everybody.”

While Nabil puts in long hours at work, Nassim is home caring for the children and cooking copious amounts of food. She never had the opportunity to learn to read or write in South Yemen, but now she is making up for lost time. Once a week, I meet Nassim at her house along with a few other women from South Yemen, and we practice the alphabet, learn colors and numbers, and show each other pictures of our children, just like mothers do all around the world. And we take advantage of every learning opportunity. When one little boy whacked the other in the head with a toy truck, we learned he’s hurt and he’s crying. In turn, Nassim teaches me ‘mom Arabic’ such as ‘come here’, ‘sit down’, and ‘be quiet’.

Nassim had a lot to say on the subject of home and holiday. Nabil translated as she spoke. “Over there (in South Yemen) you can see the holiday [preparations] because everyone is having the holiday. I see my sisters and my mother. We gather around. But Nabil was never in South Yemen for the holidays so I was missing him. And now, over here I am very happy because I’m with Nabil, but I don’t see the holiday because most Americans aren’t celebrating our holidays. And I miss my mom and sisters.” She glanced at Nabil and then back at me and added, “I’m always missing someone on the holidays.”

Two people she wasn’t missing one June evening during Ramadan was my husband and me! Nassim graciously welcomed us to break the sun-up to sun-down fast on the solstice. The room rang with laughter and conversation as we sat around the table sampling one delicious dish after another—a pretty typical holiday celebration no matter what your background.

What does Nassim see herself doing ten years from now? Her answer was quick and definitive. “I want to read and write English. I want to become a citizen so I can go visit my mom and come back. And I want to drive a car.”