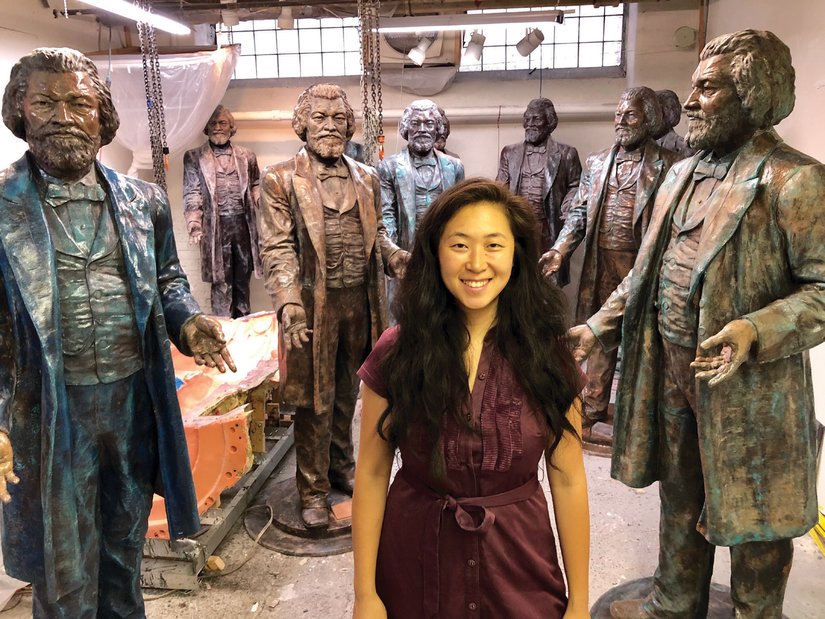 STATUES of beloved Rochester resident Frederick Douglass have been stationed all about town. One of the likenesses stands at the site of the old Douglass Family Farm on South Avenue, beside Anna Murray Douglass School #12.

The statues are being created as part of the city and county’s celebration of the bicentennial of Douglass’s birth. Chris Christopher is the Project Organizer of the bicentennial celebration. The vision for the statues came from bicentennial celebration Project Director Carvin Eison. Bleu Cease, Executive Director of the Rochester Contemporary Art Center, also helped plant the seeds that brought this vision to fruition. The creative force behind building the figures is Olivia Kim, a local artist who specializes in sculpting the human body.

There are so many events and projects to commemorate Frederick Douglass this year. What inspired this particular sculpture project?

When I began, the idea was already mostly formed: to make a new Bicentennial Monument, using the original Stanley Edwards monument and Marble bust at the University of Rochester as inspiration, and incorporate the hands of Human Rights Activist Ken Morris Jr., great, great, great grandson of Frederick Douglass and great, great grandson of Booker T. Washington. Adding Ken’s hands to the monument was meant to show how Frederick Douglass’ legacy in Human Rights still continues today through his living descendant. As I researched the many photos of Douglass at the University of Rochester’s Special Collections Archives, certain changes in Douglass’ facial expressions became evident. I saw that when he was younger, the defiant strength of his gaze challenged Americans to change their way of life. When he was much older, and the

Emancipation Proclamation had been passed, Douglass’ face was much softer, and expressed happiness. He was able to see the fulfillment of his life’s goal: the abolishment of slavery in America. When I saw Douglass’ happiness, I knew that today’s message had to be about triumph through struggle. I see all groups and cultures searching and struggling on one or more levels. I wanted to capture a wiser Douglass- one who had found self-knowledge through immense perseverance. It is important to show the world the deeper result of struggle: inner evolution. As a world, we are all struggling, and it is important to remember that internal transformation is the real root of lasting changes.

What motivated you to bring this vision to life?

Seeing as slavery has existed throughout history in countless cultures, and the struggle to end it carries through to our present time, I was inspired by the idea that Douglass could become a reminder that it is possible to end slavery. Slavery is a complex phenomenon that is generally rooted in the need to escape bodily, emotional and psychological pain. We can enslave ourselves as well as enslave others if we are unable to accept the pain of living.

There has been an outpouring of support from the local community - media, volunteers, and admirers. Have there been any responses that surprised you?

I was afraid that this project would be seen as overly stoic or dated. I have seen that historical projects can be seen as boring or difficult to relate to, and was worried that as a result, I would receive little volunteer support. Instead, I have found that the public and volunteers refer to Douglass as if he were their beloved friend. I was surprised to find that he is in the heart of people of every age, culture and orientation.

Volunteers of every kind have come to help out; from every type of profession and life experience. The outpouring of respect and friendship through creative engagements with the statues have been the most delightful responses from the public. Every week someone posts a photo that puts a new spin on the sculptures. At Hochstein, someone put an umbrella in Douglass’ hand during a heavy downpour and posted the photo on Facebook. It was a delightful take on Douglass walking around town, singing in the rain. Another post was of Douglass holding someone’s dog on a leash. People began writing about how Douglass had a dog, and very well could be walking his dog today. The community is starting to feel as if he is still alive and walking the streets of Rochester.

The statues are going up in historically significant places, and also at strategic gathering places in the community. Which location for installation is most meaningful to you, and why?

I find Kelsey’s Landing at Maplewood Park to be the most personally significant. It was a key point in the Underground Railroad, where escapees could board vessels to Canada, marking the end of their journey as fugitives. I imagine the desperation and danger that brought people escaping slavery to this point, and find it a striking contrast to the Rose Garden that exists there now. It is incredible that a location that must have witnessed so much fear and looming danger could be transformed to a place where beauty can now be appreciated. As an artist, I find that striking

With any ambitious artistic endeavor, there are challenges that lead to opportunities. Is there a particularly challenging aspect that has led to a fulfilling experience.

This project challenged me to work in the opposite way that I am used to.

There were several new elements of this project that fulfilled me: time, quantity and group dynamic. I am usually a solo studio artist... This project had a timeline that forced me to work faster and more intensely than I ever have before. I made decisions that would normally take days/weeks to make/contemplate.

Then there was the need for quantity - I am used to putting so much attention into one object. At one point during the process, the studio had 10 sculptures being worked on simultaneously!

The third challenge was very rewarding, though mentally and physically difficult to maintain: working with others. I hired two employees, which I had never done before, and delegated work to them and the approximate 140 volunteers (most were not artists) who came to help over the course of the project... Typically, I would work with the volunteers from morning to night, then worked the late night to early morning hours with my assistants Princess Tumushabe and Marion Romig. I can’t express how intense it got. I had no room to fear, just to do. That was the most fulfilling experience that this project gifted to me. I felt such enormous support and love from the community- wow! Very few artists get to experience such support. I hope other artists are motivated to do community projects so they can see how much the community loves art.

For more information about the “ReEnergizing the Legacy of Frederick Douglass” project, including a map of the installation sites for the statues, visit DouglassTour.com. To see more of Olivia Kim’s body of work, go to OliviaKimStudio.com.