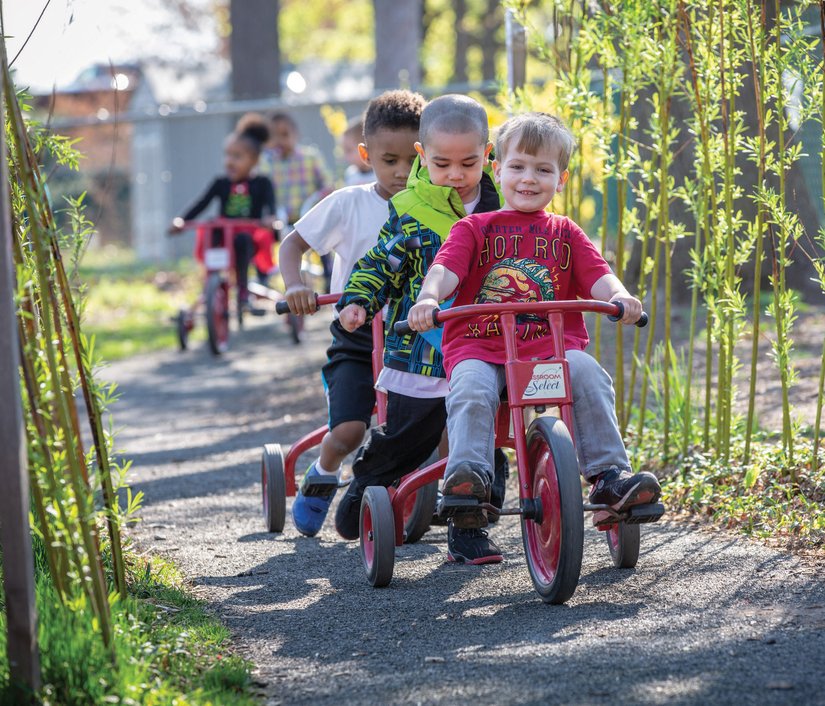 Although their reputation is built on innovation in childcare and attention to the needs of children, there is a quality to the Rochester Childfirst Network (RCN) which is symbolic of all of Rochester’s best intentions. I visited the RCN build-ing, located at 941 South Avenue across from Highland Hospital and next to the James P.B. Duffy School Number 12, on a hot morning in the early days of May. I was quickly swept away not only by the hospitality and eager helpfulness of those who greeted me, but by the sense of childhood wonder and giddiness that the environment enabled me to glimpse again.

In the waiting room, amongst blueprints for upcoming developments to the RCN’s outdoor play space, I was greeted by Director of Development Jeffrey Hoffman and CEO/Executive Director Lynn Lubecki. The beginning of the interview was conducted by the front entrance, and was periodically interrupted by enthusiastic greetings to children and parents as they shuffled in and out. There, Ms. Lubecki explained the history of RCN to me.

After the city’s founding and the period of growth which earned Rochester’s label as “America’s first Boom Town,” there followed a recession in which many of Rochester’s working men left the city in search of work. This exodus of men and money left behind mothers barely able to provide for their children and themselves, and Rochester was beset by a class of children begging and stealing, without means or moral guidance. In order to provide aid to these children, eight local women contributed private funds for the creation of the Industrial School of Rochester. In 1856 the school began taking in children of little means and training them in production of clothing and furniture, as well as teaching literacy and providing food. “That’s where the jobs were,” comments Lubecki.

Foreshadowing what was to come, even this early iteration of the Childfirst Network was combining children of various backgrounds, races, cultures, languages and levels of need, and providing them with tools to empower themselves in an integrated fashion. Throughout the remainder of the 19th cen-tury and on through the 20th, The Industrial School, soon renamed the Rochester Children’s Nursery, continued to evolve as childcare practices evolved, and in its 150th year formally became known as the Rochester Childfirst Network.

Today, the Rochester Childfirst Network provides care for some 230 children and employs about 260 people between their South Ave location and their satellite location within downtown’s Sibley building. It is estimated the Net-work’s various external programs reach some 2500 children through-out the Rochester area. Their mission could be derived from their very name: putting children of all stripes, and their individual and collective needs, first. The RCN provides two tracks of pre-K: universal pre-kindergarten (referred to within the RCN as UPK), and expanded pre-kindergarten (EPK). The UPK track is the common preschool that most children are sent though, and the expanded program provides for children who meet at least one of three qualifications: that they require a personalized aide, that they qualify for reduced school lunches, or that they are English language learners. The RCN also provides before and after school care for children up through 6th grade. The RCN has had to grapple with matters less child-friendly. Namely, poverty. Situated on the border between some of Rochester’s most affluent and manicured neighborhoods and some of Rochester’s most struggling, the RCN provides more than just child care for families struggling to clothe and feed their children. A donation-based clothing pantry is on site, and through partnerships with Foodlink and other local organizations, a food cupboard offering both non-perishables and fresh, healthy foods is refilled every day at 2 pm. On the morning I visited, a lone, golden onion remained of the prior harvest.

On a tour of the building’s many classrooms and their massive outdoor property dotted with playgrounds, Ms. Lubecki pointed out the changes being made to the playgrounds, explaining how the new blueprints meet the require-ments which would make the play spaces universally accessible, and not restrictive to the children based on either age or ability. It is vitally important to the RCN’s mission as well as to the ideals of staff that children have adequate access to green outdoor spaces to run around and “just be kids,” she emphasized. “I can feel my stress level go down every time I walk out here,” she adds. Inside the classrooms, most of which have doors leading directly outside, colorful posters and children’s artworks cover every wall (at knee-level height, for young eyes), and every classroom is stocked with a reading area, soft-edged wooden blocks, costumes for dress-up, and tables carrying sand or water for the dual purpose of education and sensory exploration. Classes are composed of a mix of special needs and prototypical children, and staffed with both regular and special education teachers, and two teacher’s aides. The RCN has been practicing this model of integrated learning since before the school districts, and the results of this and other innovations are proof of the RCN’s value. “We’re a well-kept secret,” says Lubecki, “which is ridiculous. Our quality is unsurpassed in the work we do and how we do it.”

Throughout their long history, this organization has received funding from an extensive list of notable Rochesterians: George Eastman, Bausch and Lomb, the Strongs, to name a few. Now, amidst all of the RCN’s success and prosperity, there is still work to be done. The plans depicted by the blueprints seen upon entering the building are only partially completed in the yards and playgrounds. The earth in the back of the building is sinking down. “The boiler is older than me,” Lubecki quips. “They said 60, but it can’t be operating at more than 45% efficiency.” Lubecki estimates that necessary renovations and upkeep would amount to something near $1.3 million. She then generously celebrated Mr. Hoffman’s fundraising skills, ever hopeful that the RCN’s best intentions will someday be made reality. “We never operate alone in anything we do. We’re embedded in this community, depending on each other.” With such a dedication to providing care for the community’s children, and such a deep history of doing just that, the RCN’s deserving of funds is obvious, and the dedication and love with which it operates is as evident as the sunlight on a bright spring morning.