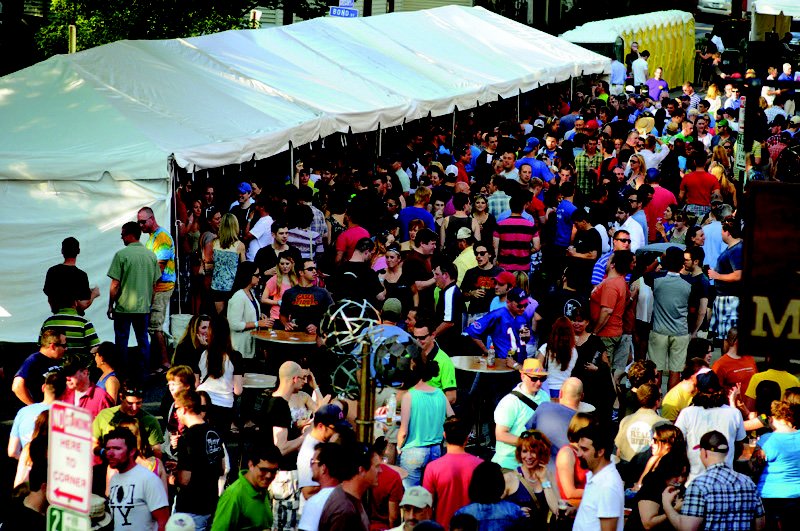 The Rochester Real Beer Expo is just around the corner and now in its 9th year. The Expo is produced by BASWA board members and local business owners and all proceeds from the event are rolled back into the neighborhood through BASWA projects including plants and flowers, street furniture, public art, events such as the annual It’s A Wonderful Life Holiday Festival, and this publication, The South Wedge Quarterly.

All the craft beer disciples coming out to this year’s annual Rochester Real Beer Expo can expect to see more fruity treats than ever before. They will often be served up as puckering sours. Some with oak, some with fancy exotic yeast strains, some salt and so on. Some fruit will be fresh. Some not at all. It’s pretty wild and funky to see how ingrained sours have become in our beer scene. People just love to chug down these fruity summer crushers and who could blame them. Back in my youth if you’d have served one of the old chaps down at the local gin mill one of these it would have been thrown back over the bar and accompanied by some mildly humorous quip about vinegar and chips.

On the other end of the scale you can expect to see a tremendous selection of beers that are often referred to as pastry stouts. Strong dark beers that showcase a range of ingredients that would be at home in any sweet toothed baker’s cabinet. Heaps of peanut butter, lashings of syrup with chocolate, breakfast cereal and marshmallows finished off with liberal sprinkles and a few wheelbarrow loads of Girl Scout cookies would be an appropriate ingredients list for all the optional extras in addition of course to the background of beer notes. Strong in flavor, damaging to the waistline, bruisingly high in booze and sticky on the lips as you slurp it down.

What else will there be? How’s about the good old IPA that is anything but old? Fresh and bright. Loaded with pungent hops. Juicy, hazy, fluffy, pillowy, murky, brothy, frothy etc. All the Y word descriptors seem to work well. The style has come so far since the English Imperialists were dragging their hoppy swill across oceans so that the soldiers could still lush it up on the weekends like they would do at home. Not that long ago IPAs were fairly clear and most definitely bitter. Those brewing traditions have largely been thrown out of the window as we hurtle down the road of beer evolution. As drinkers crave the next big thing in hops, brewers search for sexy new varieties from as far away as Australia. It is also a fabulous excuse for these captains of fermentation to explore the world, making friends with other brewers and crafting crazy new concoctions that will sport their own brand name, but usually never show up in their brewery’s hometown. Who wants to drink Australian IPA anyway? That’s one of the neat tricks with this new-fangled style. It is simply not a good traveler. It’s most happy hanging out as a homebody and entertaining the locals. To be honest, the all mighty hop is rather delicate and much more like your iPhone than a fine red wine when it comes to age. What could be a better style for our flourishing local beer scene? Drink fresh. Drink local!

Fortunately, a good few of our many local breweries have really embraced the style and continue to pump out a seemingly endless variety of new beers that have names that give almost no indication of what it is that you are about to drink, but fortunately rarely disappoint. Given that the mission has always been to serve the very best beers to the Beer Expo loyalists we will have the very best of our local scene on offer for you this year, as voted on by Rochester’s biggest and very vocal, social media beer fan group. A much more pleasant approach to local brewery selection than having some poor individual have to make the decision themselves.

Expect lots of the above mentioned styles of beer and be sure to seek out anything that doesn’t fit into the described styles. There are still a few surprises out there to be had. Now, please excuse me as I am headed down to my local beer shop to crush a few slushies.