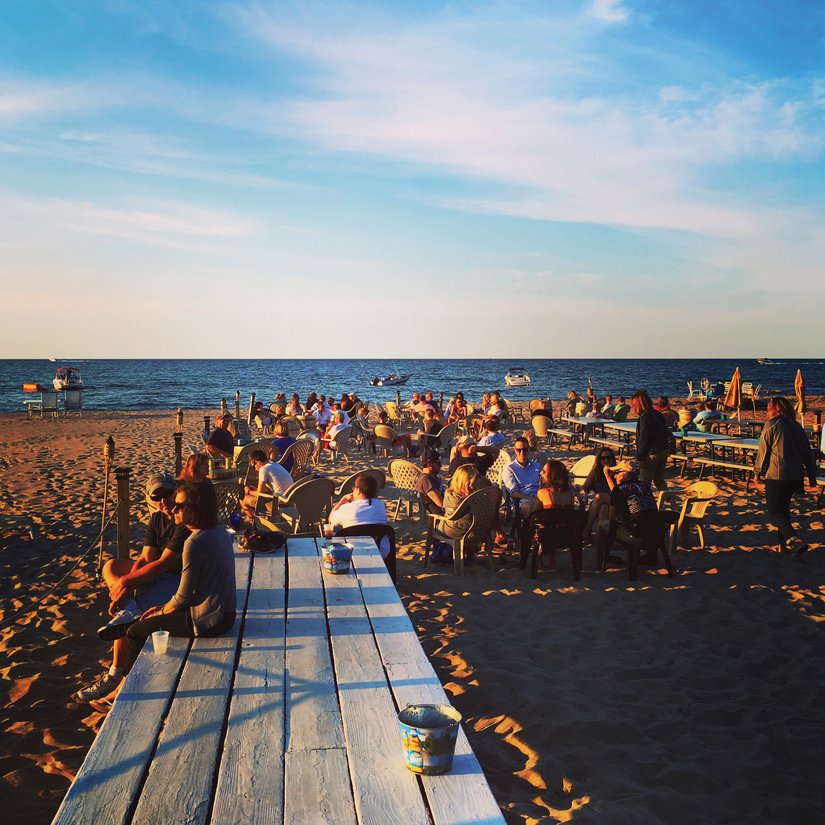 Summer in Rochester is FINALLY here! I don’t know about you, but this time of year all I want to do is grab a drink and head outdoors. While some of us imbibe from the comfort of our yards and porches, the rest of us opt to head to some of our favorite establishments in and around the neighborhood to grab a libation and soak in some rays. I asked around amongst my friends and acquaintances and I’ve listed the top 10 places (in no particular order) that people liked most to head out to when relaxation calls:

One of the few rooftop locations on this menu, TRATA has certainly made a name for itself. Located in the Culver Road Armory, it’s another brainchild of Two For Seven restauranteur Charlie Fitzsimmons. Not only do they offer over 40 rotating drafts inside, they have an additional 16 outside, along with several bar tables and heat lamps to keep you warm on those chilly evenings.

Well-known for their famous Moscow Mules and live music, Abilene feels like home no matter where you come from. It’s not rare that you can see such acts like JD McPherson, Chris Barron, and Dwight Yoakam performing on a stage that feels like you built it in your own backyard.

Located on the roof of the Strathallan Hotel, Hattie’s is one of the hottest destinations for fresh sushi and delicious cocktails, wines and beers. Also, vodka ON DRAFT?? Yes please! There’s also not too many places that beat it for one of the best views of the city.

Tap has been another staple in the Wedge for several years and for good reason. Voted the Best Beer Bar by City Magazine several years in a row, it’s shady, secluded back deck is a welcome haven for those who enjoy a quiet afternoon with a beer and a book or some friends. If you’re looking to people-watch and socialize, the seating out front along Gregory and Cayuga streets provides plenty of opportunity to engage in any goings-on around the neighborhood.

Park Avenue has long been known as the epicenter of people-watching cafes, restaurants and watering holes in Rochester. The Half Pint has been around for only a few years but it feels like it’s always been here. Quaint and reminiscent of a European pub, there are several tables to lounge at along Park Avenue and Oxford Street.

Recently moving in to the space formerly known as Victoire, Unter Biergarten seeks to bring a marriage of Bavarian and New American cuisines along with authentic German beers to the East End district. A large recessed beer garden secludes you from the hustle and bustle of the city and is headed by a large fireplace that provides comfort year-round.

Anyone with a pulse in the Wedge has been to Lux Lounge at least once in their lives and when it comes to outdoor ambiance, it certainly doesn’t disappoint. The dog-friendly backyard is laden with picnic tables, complete with a hammock & fire pit, AND has a connection to Star Alley Park which hosts live music every 3rd Thursday well into the autumn months.

Swiftwater has quickly taken the Wedge by storm and has become one of the go-to hotspots in the neighborhood for outdoor lounging. Once you grab one of their signature brews, head out to the patio through the garage door that brings the outdoors in. The beer garden is adorned with hop vines that stretch from the planters to the roof and provide a touch of shade to the picnic tables that overlook Mt Hope Avenue.

There was no way I could finish this list without mentioning Marge’s. Truly a classic in Rochester, everyone has been to Marge’s--it just has a knack for bringing everyone together to have a good time. By far the tiniest bar I’ve ever seen, the kitschy interior makes you feel like you’re at a beachy dive somewhere far away from here. Who doesn’t love sipping on a cocktail whilst dipping their toes in the sand, watching the sunset over Lake Ontario and listening to whatever good time band is playing on the outdoor stage? The best part is that you don’t have to get a flight home-- just a short drive from the city.

Let’s just face facts--no self-respecting Rochesterian hasn’t had a Genny at some point in their life. Genesee Brewery has come a long way from its classics and offers plenty of outdoor seating at its Brewhouse. Not only does it have a spacious patio along Cataract St, but it too boasts a rooftop bar where you can overlook the city, High Falls and the Genesee River Gorge.