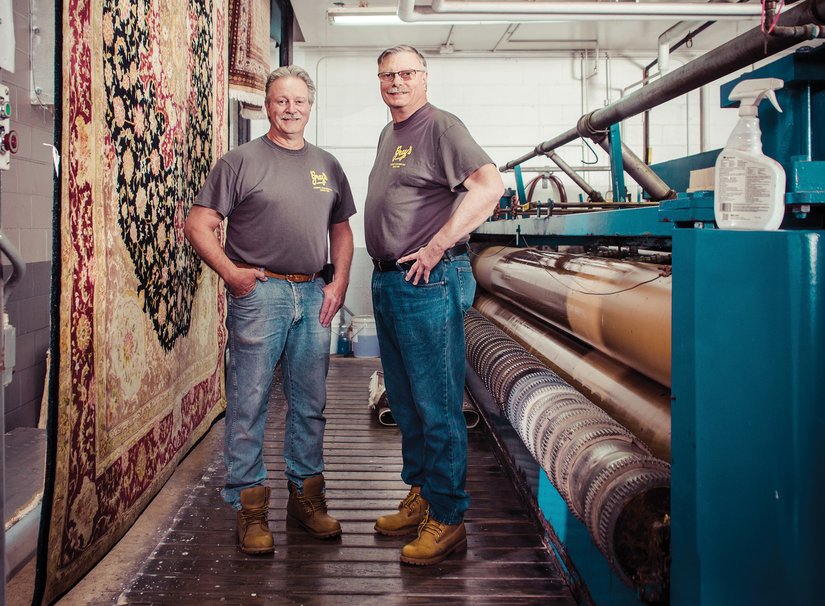 Tucked in at the end of a parking lot on Sanford Street is a two-story building that has a sturdy metal balcony railing on the second floor. In warmer weather, if you happen to walk by at the right time, you may see a rug airing out over the railing or the forklift hoisting a large rug up to the repair department.

Gray’s trucks say “Serving the Rochester area for over 100 years”. The family story is that great-grandfather William C. Gray started the carpet cleaning business in Utica in 1900. Son-in-law Albert Silvernail, who was married to Alma Gray, didn’t like the set-up in Utica and moved to Rochester in the 1940’s. Albert bought the business for $50 and paid off the balance over time. In the early days, Alma did the office paper work from home and employees included their son David and their son-in-law Howard Frank. They in turn brought into the business their sons Ronald, now 63 and Donald, 57 who now own the business that their cousin Joyce Frank has worked since 1989. Ron’s son Brian, 41 is the 5th generation employed at Gray’s. Ron, Don and John all went to Monroe High School as did their mother Joanne. They lived in the house in front of the plant and later moved to Mulberry Street.

The original wood structured building burnt down on September 7, 1962. Thirty-five years to the day, interior cameras in the garage showed the lights go on, on a diesel truck parked in the bay at 4 AM, followed by a flash of light and smoke before the cameras went out and the truck burst into flames.

In the 1960’s, the carpets cleaned in-plant were mostly area rug, braided and oriental and domestic. The plant was re-built in 1963 with a state of the art conveyor dry room and up to date rug washer. With the arrival of wall-to-wall carpeting, the area rug cleaning business dropped off and Gray’s diversified into entrance mat rentals. They also do a large portion of commercial and residential carpet and rug repair, including sewing, trimming, binding, serging and fringing of area rugs. As for changing times, all carpet cleaning products must meet state and federal guidelines which are safer for customers and employees.

Did Ron always think he would grow up into the rug cleaning business? Among the jobs he held in high school in the 1960’s was working at Peter’s Sweet Shop where his mother taught Peter how to speak English. His mom worked at Livadas’ store on Monroe Avenue and Ron knew Peter for most of his life before Peter’s death a few years ago. Ron also worked part-time at Mazler Press, across the street on Sanford, which did the printing for Gray’s. It wasn’t too long before he joined his grandfather, father, uncles and cousins. He attended a semester of college but decided he preferred to work. Hopefully some day they will think about retirement. But for now, Ron and Don enjoy cleaning and repairing carpet and area rugs.