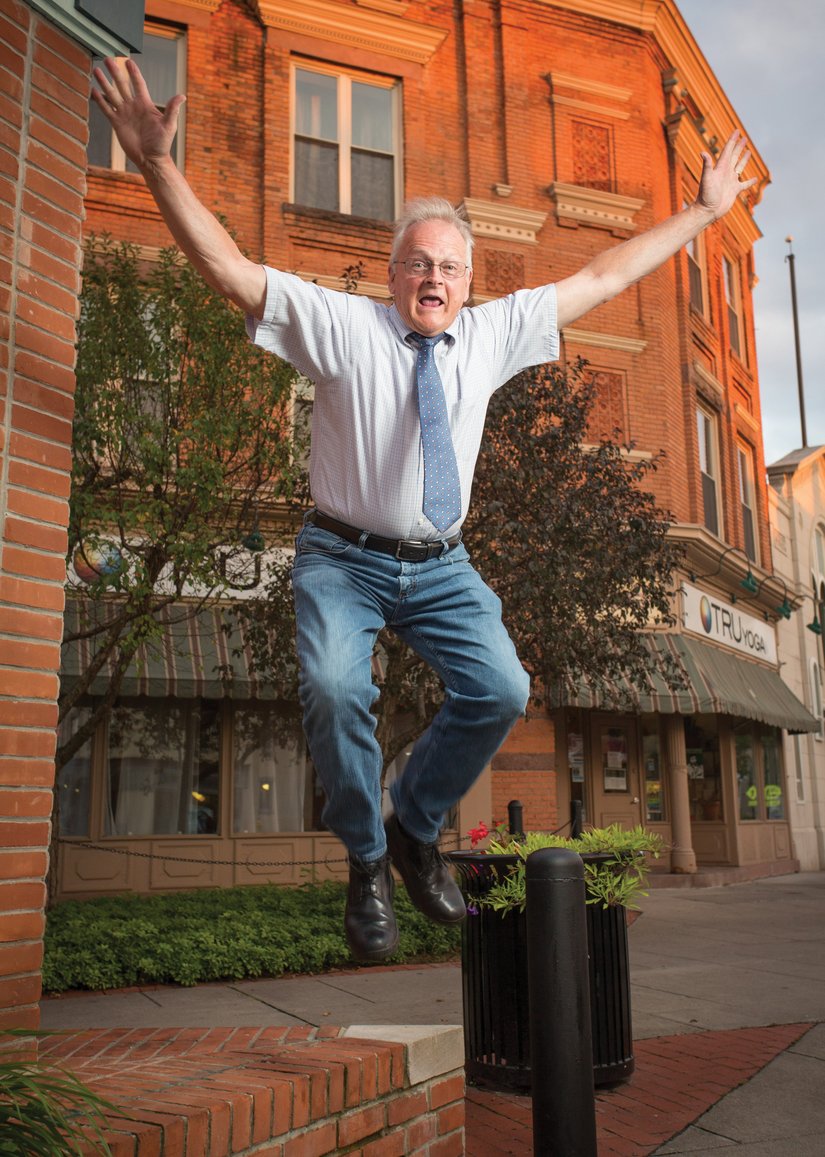 A common sight early on a Saturday morning in the Wedge is Ron Maier patiently, tirelessly removing old handbills from light poles, pulling weeds, or picking up trash around Gregory and South Avenue. These acts, small contributions which greatly enhance the neighborhood for all of us who live and work here, pale in comparison to the larger contributions that Ron along his wife Norma and family have made to the restoration and preservation of many of the historic properties in the South Wedge.

In 1969 when this neighborhood was blighted with 120 boarded and vacant houses from the tip of Mount Hope Avenue to Sanford Street, Ron Maier and then-partner Ken Christensen founded Kenron Industrial Air Conditioning. Ron took full ownership in 1971 and, through a deal with Jo-Mor theatre, took over the Fine Arts theatre at 700 South Ave. for Kenron Industrial Air Conditioning, Inc. office and shop in 1975. Around this same time, some smart thinkers came up with the name “South Wedge” and the slogan, “Building Blocks of Neighbors and Friends.” One of them was Ron who became the first chairman of a group working with the City, residents and business people, the South Wedge Planning Committee.

Ron and Norma’s favorite restoration project in the Wedge is 287 Gregory / 696 South Ave, at the corner of South and Gregory. The property was purchased in June of 1980 for $1 and completed in 1981. After an explosion and fire rendered much of the building uninhabitable, the City had an order of demolition on the building. Norma and Ron decided to purchase and restore the building, saving one of, if not the only, four corners in commercial Rochester from before the turn of 20th century from being destroyed. Ron and Norma, with their children Shawn and Shana, spent countless evenings and weekends renovating the place brick by brick.

Looking back on the decision, Maier admits they were unprepared for the scope of the project. “We were naïve as to the total effort we would need! We owned the building next door where my HVAC company, Kenron Industrial Air Conditioning, Inc. had an office and shop in the old (Rexy / Princess / Fine Arts theatre). We did not want a parking lot next to us when there was such unique architecture on all four corners. $$ - no I mean lots of $$$. No, let’s make that $$$,$$$ to repair and bring back to proper use. I have to say if it wasn’t for Dave Luxemburg from the City of Rochester working with us and developing the MCRP (Master of City and Regional Planning) program it would have been much harder.”

The success of the project was due to the Maier’s ability to obtain funding when there was a downturn in the economy. They paid 21% interest (that’s correct 21% interest!) but found qualified expertise in their team. They hired architect Dan Mossien and talented contractors to handle masonry, structural, and all the other disciplines of construction.

Maier’s advice to people thinking about buying a fixer-upper to restore? “You better understand what a pro-forma is and understand all the aspects of costs, time with municipal regulations (all municipalities are not created equal), choosing the correct consulting team (attorney, accountant, banker, architect – and psychiatrist). Have the game plan down in detail with buy-in from all. Understand what your neighborhood is looking for and get as much of their thoughts and buy in as possible. They can be advocates or they can be obstacles.”

The other notable Wedge restoration projects that were undertaken by the family to great result, each one posing its own challenges:

The Rexy / Princess Theatre, 700 South. Owned by the Maier family since 1975, and by 2013, Ron and Norma had already removed five front façades of the Fine Arts Theater on South Avenue to reveal the original current façade. Shawn designed new loft apartments which, along with architect Randall Peacock’s input, became amazing rentals along with new commercial spaces in front. Each apartment has its own entrance on the side of the building where local artist Michael Moncibaiz painted his graphic “Wall Therapy.”

Lauterbach Building, 750 South Ave. Under Shawn’s lead in 2008, the Maier’s bought the Lauterbach Building and converted an upper level that had been vacant for half a century into six apartments that always have a waiting list. Shawn and a friend stripped and restored the woodwork upstairs, numbering each piece of wood to return it to its original location. The former hardware store at street level was rehabbed and now houses Equal Grounds coffee shop. That renovation was not easy but with great effort by the Maier’s and architect Randall Peacock, all code requirements were met and the 100+ years of building character carefully preserved.

The German House, 315 Gregory Street. The family purchased this local landmark knowing that its rich history was likely to be lost as the property’s condition was deteriorating with every year that passed and the decline needed to be reversed. “Picture the pint-sized Mrs. Maier on scaffolding painting the 25’ high metal ceiling by hand. She also personally restored the woodwork throughout the entire auditorium and ran the restaurant and theater side of the business for many years.” says Ron.

At the celebration for the reopening of the German House Mayor Thomas Ryan said, “The refurbishment of the German House ensures that this beautiful structure will continue to play an important role in our community’s history.” The building and the history of The German House with its importance for the whole community brought Lucien Moran, then Monroe County Supervisor, to join with Ryan in the presentation of “Certification of Recognition.”

Siddons Roofing, 299 Gregory. Kenron moved to the property in 2010. Buying that building and creating an efficient office, shop and warehouse for Kenron also added much needed parking for the Wedge. The building hosts one of the few Geothermal Heating/ Cooling systems in the City.

As the Maier children grew up, Shawn and his wife Frances entered the family business while daughter Shana married a Brit, Stuart Taplin, and moved to London. However, when they visit twice a year, she, Stuart, and children Alison, Oliver, and Amelie often lend a hand at the family properties in the South Wedge. Nowadays, Shawn’s four young boys, Ronan, Eamon, Eoghan and Ian, help plant, water and weed and even paint the big candy canes at Christmas for the German House. We hope they will all be in and around the Wedge for years to come.