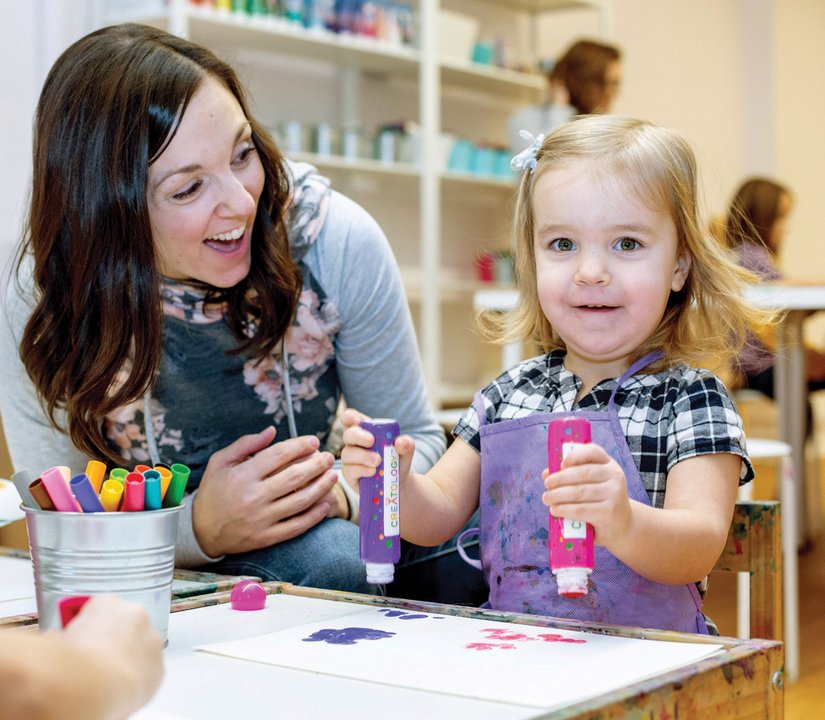 As the South Wedge evolves, new businesses crop up as unassumingly as the spring’s first blooms and await our notice. You may have seen the latest arrival on the corner of South and Gregory, Small Fry Art Studio. Here’s hoping this one will be a perennial.

Small Fry offers art classes and open studio to children and adults in Rochester. Founder and Creative Director Courtney Barbe transplanted the business to the South Wedge in June of 2018 after it outgrew its previous digs above Java’s in the Public Market. Barbe was immediately struck by the idea to move to the South Wedge.

“When I was looking at possible locations to move Small Fry, I had my heart set on being in the South Wedge. The neighborhood has always been my favorite in the city—I’m drawn to the unique, independent businesses that have made homes for themselves in the Wedge,” says Barbe. “It’s a community of people who are invested in staying true to the kind, inclusive, and creative spirit that’s always been prevalent—and I knew deep down that we would be welcomed into the fold with open arms.”

Students here develop more than artistic techniques and imagination. Janet McNally brings her granddaughter Julia to Small Fry from her house just a few blocks away. “She was shy when she first started classes but art class has given her confidence and independence,” says McNally.

Families are willing to travel to reach the special space Barbe has created to foster creativity among their little ones. Crystal Saltrelli travels 30 minutes each way to bring her daughter, Lily, from Parma to weekly classes at Small Fry. The classes helped Lily, typically hesitant in new situations, come alive through making art. Meanwhile, Small Fry has become a community for regulars like Saltrelli.

“We’ve come to feel like a part of the ‘Small Fry family.’ Lily loves making art alongside the friends she’s made in class, several of whom we’ve been seeing each week for months and even years. I appreciate the balance that Small Fry strikes between teaching art and allowing the kids to express their own creativity and uniqueness. You can feel the heart and soul that Courtney has put into creating an environment that is welcoming, supportive, and empowering... and also just a whole lot of fun,” says Saltrelli.

Bringing their kids from other areas to classes at Small Fry is an opportunity for some parents to take advantage of other offerings in the neighborhood. Parent Ashley Gavette visits Abundance Co-Op and Marie Daley Park with her toddler. While one of her kids is in class, Ashley Barton takes her other child for one-on-one time at Hedonist, Equal Grounds, HarryG’s, or Little Venice. The idea of Small Fry first germinated in Barbe’s mind because of her creative daughter, Emmi, now in first grade.

“When she was about three and I started to really take note of her growing love for art, I began to think that it would be amazing if there was a place I could take her where she could create to her heart’s content, where she’d have an abundance of materials to choose from, and where she would be free to explore and express herself through her creativity—and also someplace where the colorful, glittery mess could happen that wasn’t my kitchen table. That magical place that I dreamed up in my mind didn’t exist, so I decided to create it myself,” says Barbe.

Small Fry offers open studio every Saturday, space for birthday parties, and classes from pre-K through older children and adults. “It’s all about giving students the space to make independent choices and self guide their creative activities as they build, make and imagine entire narratives,” says Lead Teacher Gretchen Ettlie.

Small Fry offers fertile ground for the seeds of creativity to grow and flourish in young people. The South Wedge is lucky to be the place where Small Fry has put down roots.