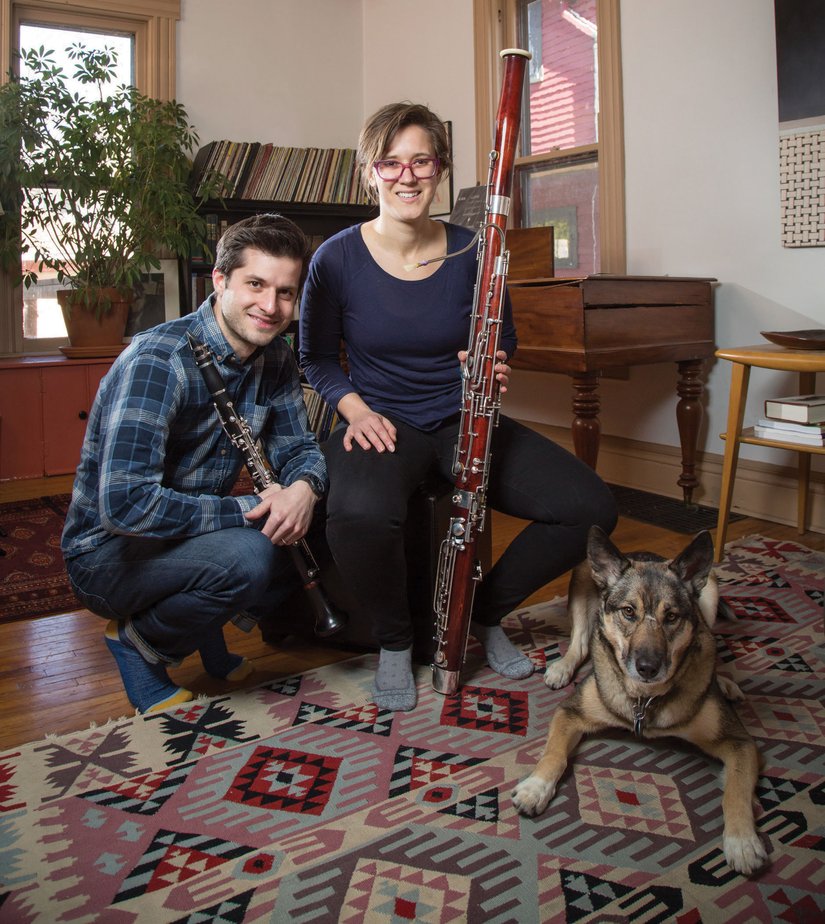 Spotlight On: Rose Vrbsky & Will Amsel

Let’s talk about pianos. Not just your standard upright or elegant baby grand. Square pianos; which were the first incarnation of the former two and were all the rage before 1860. They were the instrument of choice for families for over 150 years and the South Wedge harbors at least one.

South Wedge residents Rose Vrbsky and Will Amsel were out walking their dog, Luna, when they found such a thing on the side of the road. Old, abandoned, just a shadow of its former self (they thought it was a table); but it caught their attention for some reason and when they discov-ered that it was actually an instrument, they knew it needed a new home. In their home. As irony (or is it destiny?) would have it, home it went, into a very musical South Wedge home. Rose is currently enjoying her first year as acting second bassoon in the Rochester Philharmonic Or-chestra where Will has been serving as the second and e-flat clarinet since 2012.

The couple have spent their lives thus far immersed in music. “My mom plays cello and my dad was an oboist so the bassoon is the perfect combination of those two instruments. I was always drawn to the sound and I really wanted to play it.” And play Rose did, ever since she was a sixth grader living in Vermont.

Will’s story started at the same age as Rose’s but in a whole other part of the country. “I started on clarinet as a kid in Texas. You try every mouth piece of all the instruments that are available and they inspect your embouchure and come up with a plan that you should be a wind or brass player. They told me basically I should do oboe or clarinet. I have a relative who plays clarinet and I had no idea what the oboe was so I’m just like, ‘I’m not playing oboe.’ So I started playing clarinet and enjoyed it and that was that.”

This is the point when Rose giggles and teases Will because she actually started playing clarinet in the 4th grade but says she switched to bassoon because clarinet was too easy. He laughs and says that it was true. Their fun, playful relationship began when they met at the New England conservatory in Boston as they were both majoring in music performance and ended up at Tem-ple University for their master’s in music. It was Will’s acceptance into the RPO that first brought them to Rochester and finally into the South Wedge where they now own a beautiful Victorian home.

They love the walkability of the neighborhood, the ease in which they can walk Luna to Highland Park and Mount Hope Cemetery, grab dinner or coffee or take a yoga class. They also have an impressive collection of records that they’ve happened upon during their treks around the Wedge; saved from the curb like their piano.

Perhaps if you stroll through the South Wedge one spring day, you’ll hear a favorite from Mozart, Brahms, Pavarotti, or Ella Fitzgerald, drifting through Rose and Will’s open window along with the crackle of a needle on spinning vinyl. And maybe…just maybe you’ll catch a note or two from a very contented old square piano.