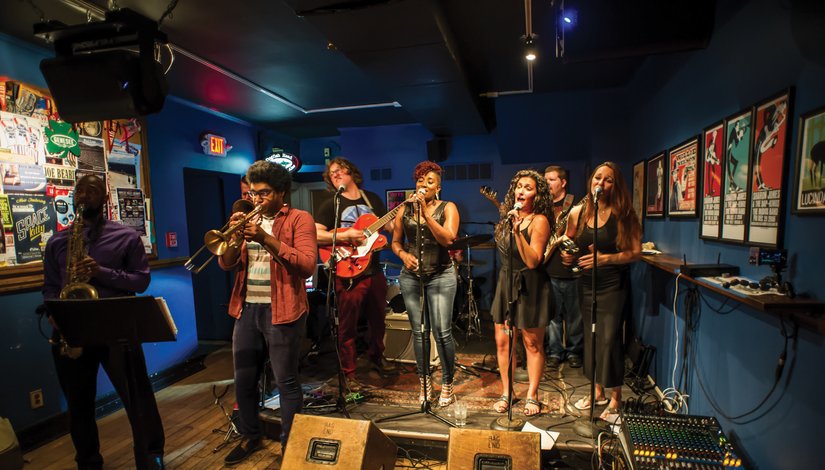 Spotlight On: The Mighty High and Dry

The Mighty High and Dry was coined as co-founder and South Wedge resident Alan Murphy was listening to satellite radio and noticing some trends feeding back to him in the form of singer-songwriters and their plights. “There was a simultaneous weariness and strength to what I was hearing, like somebody who’s been beaten down but keeps getting back up. We were just coming out of the financial crisis that happened eight or nine years ago and it was like, ‘Ok yeah. We’ve been left high and dry, but the blues will prevail. Toughness will get us through,’” says Alan.

Indeed, quitting your full-time teaching job of fifteen years to pursue something you love to do isn’t a decision to take lightly but when music calls you from the inside, sometimes you just have to pick up the phone. Perhaps it was the influence of his brother, 12 years his senior, sharing with him the legends from Motown, Bob Dylan and the Beatles when he was a just a kid.

Or maybe it was his persistent piano practice every morning at his Aunt’s house in Middleville, NY, playing the trombone and singing chorus in grade school. Quite possibly is was this fine swirl of life experience and passion for the art of the song that helped him leap into the great unknown of following one’s heart.

Alongside band co-founder and bassist Kyle Vock, The Mighty High and Dry is a mix of life experience and talent where four guys playing your basic instruments can sometimes be 11 people (known as the Mighty High and Dry Assembly) complete with horns and smoldering women’s vocals. This band is an ever evolving mix of American “Rock and Soul.” It’s a little funk, a touch of R&B, soul, Americana, and a mixture of all the classic musicians who believe that the song is the core of the art.

“I started to realize at some point that there are things that could be expressed by putting the song first that you wouldn’t necessarily get by using a different approach. I think it was a slow germination process to realize that writing songs at a high level became important to me,” says Alan. And what’s important to him and Kyle spreads through the whole band like a taut piano string. Everyone writes—and just about everyone takes the lead during a live show so the concert you see this month won’t be the same as the one you see the next.

And that pretty much sums up their Rochester schedule. TMHaD will hit a stage somewhere around town maybe once or twice a month with a smattering of shows elsewhere. Plans are underway to explore more terrain outside of town and share their characteristic sounds on a small tour in the near future.

Speaking of the near future, their new release is coming in EP form and you can expect another directional turn as they explore and streamline their acoustic and folk elements which differs from their 2013’s Self-Titled release and 2016’s, Next Waltz.

When Alan was in fourth grade he was asked to write his autobiography. He said he was going to be either a musician, writer, or baseball player. While maybe not a baseball player, he surrounds himself with a team of players, writers, and vocalists that share a kindred passion for the art of the song.

They fit snugly into our South Wedge neighborhood. Don’t ya think?

The Mighty High and Dry members: