Street Therapy in the South Wedge

Now in its fifth year, WALL\THERAPY is an art and community intervention project, using public murals as a means to transform the urban landscape, inspire, and build community throughout Rochester. With more than 15 works, the South Wedge neighborhood is known as a hub for official WALL\THERAPY murals, alongside other inspired wall art from locally, nationally and internationally renowned artists. Work from muralists such as Case, Conor Harrington, Gaia, St. Monci and Thievin’ Stephen, and many more, grace its buildings’ walls.

During this year’s Harvest Hootenany, the Business Association of the South Wedge Area (BASWA) took WALL\THERAPY’s underlying concept of community art to the streets with the aptly named “Street Therapy.” Alumni artists Shawnee Hill, Nate Hodge and Matthew Roberts, assisted by Buffalo-based artist Jay Tower, created a mural right on the pavement of South Avenue where it meets Gregory Street during the daylong fall festival. BASWA’s long-term plan is to expand and maintain the mural during the annual Harvest Hoo- tenanny festivals, taking advantage of the street’s closing and the community support.

The mural’s kaleidoscopic homage to Rochester’s much loved city symbol catches the eye and brightens the street, but also serves another purpose—it slows traffic on one of the neighborhood’s busiest roads. Over the past decade, communities across the country have taken a different tack to encourage drivers to slow down while beautifying roads and intersections with hand-painted murals. Now, as people travel through the South Wedge, this vibrant mural will engage drivers and situate their minds to where they are over where they are going, while also lightening their right foot. 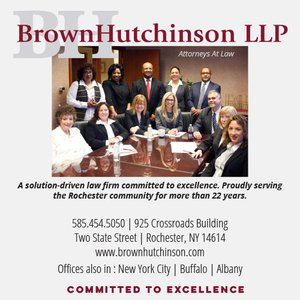