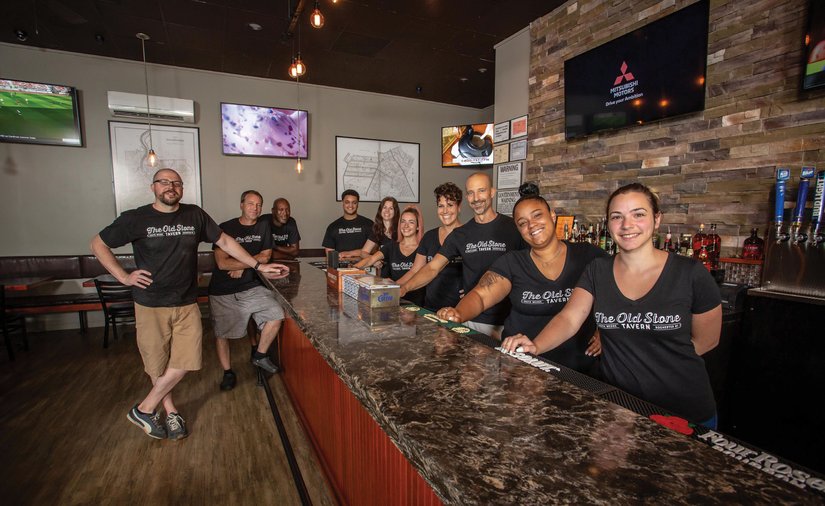 Let’s put our hands together for Old Stone Tavern, at 758 South Ave. which had its soft opening in July. After business partners Marc Taranto and Jeff Wilczewski took over the Orbs location, they had to apply for a liquor license and then had a few weeks of remodeling and rebranding ahead of them. Part of the interior make-over included local maps to connect with the South Wedge landmark at One Mount Hope: the Old Stone Warehouse.

This is the city’s oldest commercial building, built between 1821-22 that like a phoenix rising from ashes withstood times of activity, idleness, decay and disaster to be resurrected by Ben Kendig in 1986. It was used for office space until he sold it to ABVI-Goodwill in 2005, and then had a thorough restoration before reopening as Bivona Childhood Advocacy Center in 2015.

Now that Marc and Jeff’s early hurdles are over, neighbors can relax in a bar that serves really cool food and happens to have sports including Sunday night football and English Premier League soccer. For beer fans, they have 10 beers on draft, craft beers by the pint or pitcher and a variety of canned and bottled beers.

The new owners have gone over the menu and take special care with things like twice cooked wings, cold-fermented pizza dough, and hand-breaded fried chicken. Most items, like dressing and sauces are made from scratch. In addition to the pizzas, they have plates, burger and hots as well as gluten-free and vegetarian options like a veggie burger made with quinoa and black beans. My personal taste test confirmed that their cauliflower-crust pizza is wonderful; the veggie dog, of a marinated roasted carrot, was a delicious surprise and the gluten-free hot dog buns were great! Did I mention very reasonable prices?

Marc, who grew up in Syracuse, is an engineer who got bit by the entrepreneurial bug and wanted the personal connection of working in a bar as compared to a cubicle. He’s at home in the South Wedge area, having lived at Crawford and Meigs for five years. Now he and his wife Jennifer, and their children, Alexis and Michael, live in the village of Fairport. At one time, Marc hired Jeff whom he has known for about 15 years. They worked together for 8-9 years at Microwave Data Systems at Science Parkway. Jeff and his wife Amanda have a one-year old, Andrew, and live in Brighton. Jeff is the social media and tech expert, while Marc handles the day-today operations.