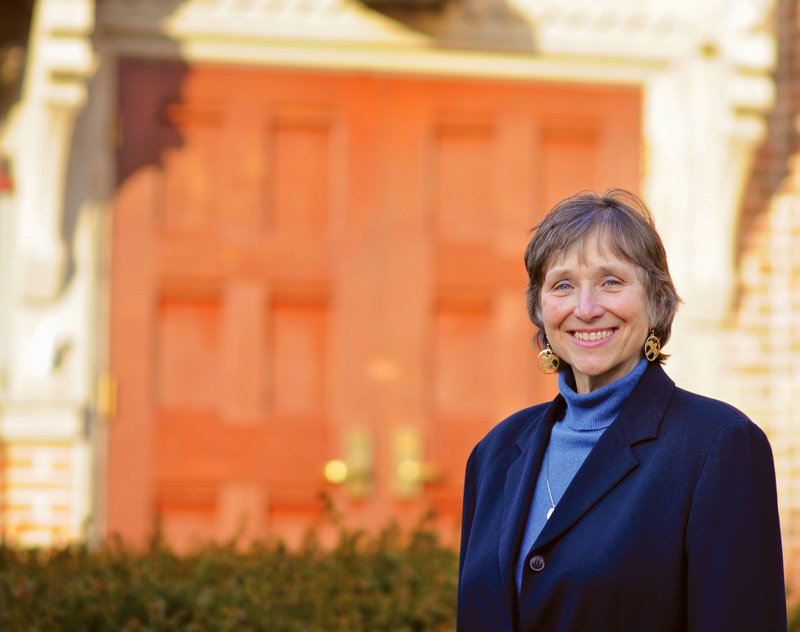 What do you do with a neighborhood abandoned and isolated, its future in doubt? That was the question facing Rev. Judy Lee Hay 40 years ago when she began her ministry in the South Wedge. Her contributions to the revival of the neighborhood are remarkable. Calvary St. Andrews (CSA) church was packed for her last sermon on January 20th. Although she will no longer be the pastor at CSA, she will remain invested in the neighborhood she helped to build.

Judy Lee Hay’s parents owned two farms in Gouverneur, New York, about 30 miles east of Alexandria Bay. Growing up, Rev. Hay was surrounded by family. Their old farmhouse, with many bedrooms, was always open to family, neighbors and strangers who needed a place to sleep. The dining room table was like a food cupboard that was freely shared with all. Her parents hired cousins and extended relatives to work on the farms. From them, she learned the importance of hard work, although Amy, her youngest sister, jokes that she never saw Judy milk a cow. And rather than work at the family’s haying details, she backpacked around Europe.

As a girl, Judy would sit happily in the front of Gouverneur Presbyterian Church with her friends. Being in church holds many positive memories for her. When she was in 7th grade, the pastor had a heart attack during the service and was immediately surrounded by parishioners. Then, before being carried out, he joked; “You didn’t think I was going to let you go home early!” She was taken by the sight of caring people rushing to his side, and his ability to laugh in the middle of a crisis. That model has sustained her over the years.

Rev. Hay received a BA in English and Sociology from Dubuque University in Iowa in 1968. She questioned whether to go into politics, religion or teaching as she entered McCormick Theological Seminary in Chicago in the middle of the racial and social upheavals of the Viet Nam War. The superb leadership of Rev. Jack Stott during a take-over and sit-in at the college by a group called the Young Lords inspired her to choose urban ministry as her life’s work. After the faculty held teach-ins for the entire community, her belief in the church’s role in neighborhood work was set.

In 1971, Rev. Hay was one of four women out of a class of fifty ordained at McCormack. Long-time colleague Rev. Anne Waasdorp remarked that Rev. Hay’s outspokenness against the Viet-Nam War as well as her being female made her first two years as a Presbyterian minister very tough. In 1973 Rev. Hay began her ministry at Calvary St. Andrews as Community Minister and was faced with the challenge of being a Presbyterian minister in a joint Presbyterian and Episcopalian parish – and the Episcopal church didn’t ordain women. From 1973 until 2000, she led services in both traditions and was the first non-Episcopalian to vote in the Episcopal Diocese of Rochester.

In the early 1970’s, longtime South Wedge neighbor Kathy Englerth was part of an advisory board at the CSA nursery school where parents met and socialized. The previous pastor had never attended their meetings. When Rev. Hay arrived, she announced that she would. Kathy questioned, “WHY!?” Rev. Hay showed up and spoke about long-range planning and by-laws — but she was not used to being in a roomful of young mothers, some still nursing, and toddlers milling all around. “You should have seen the look on her face!” Kathy said. Before long there was a line item in the budget for childcare.

Under Rev. Hay’s leadership, the nursery school program grew. By reaching out to the greater Presbyterian community, the program was able to host 40 to 45 kids. The Reading Partners program became very successful and utilized 25 volunteers every week.

In 1979, CSA became a New Light Congregation open to gays and lesbians. That same year Rev. Hay became the first woman in the United States to be named a Senior Pastor and had her article on feminist theology pulled from church publications. Waasdorp said, “Judy always believed in the possibility of a better church, community and world, and has never stopped honing the skills to do it.”

The challenges Rev. Hay faced 40 years ago were not just in the church. ”The community was in transition as people moved from the city to the suburbs. Kids roamed the streets, drugs were prevalent, and boarded houses dotted the streets. Racial tensions were high,” Rev Hay says. While some people described the shift in the neighborhood as “white flight,” she saw it as “a class system.” People who have reached a certain economic level moved out of the city for different school systems and different houses.

In 1974, the city of Rochester needed a group to represent the neighborhood and looked to CSA to organize one. A partnership began between the church, the neighborhood (in the form of the South East Area Coalition [SEAC]) and the city. By 1978, this planning committee was a loose group that worked through SEAC for funding. In 1982, the committee, chaired by businessman Ron Maier, became incorporated as the South Wedge Planning Committee (SWPC.) Rev. Hay served as the Executive Director of SWPC for 16 years. Maier cited the way Judy teaches by example. “Time and again, I saw her take the lead against obstacles others wouldn’t touch.”

The city provided the skills of city planner David Luxemburg, and had RIT students draw up a map illustrating all 120 vacant houses. Rev. Hay’s reaction was “Oh my God! Yes, we know there are vacant houses on the street, but this is really bad. Visually you get it, in a different way.”

So the question was how to turn around those vacant houses. SWPC put pressure on investors to re-invest in their properties. A pilot program of urban homesteading began in which a house was put in a lottery system and a person who was randomly chosen would get the house for $500 and have 18 months to bring it up to code. About a dozen houses were rehabbed through this program. SWPC also brought in realtor Bill Coppard, who bought, rehabbed and sold houses to owner-occupants. The group of investors grew with Pete Monacelli, Ben Kendig, Tom Cantin, Harry Caulfield, Mark Caulfield and others stepping up to the challenge. One of their simplest but easiest strategies was to encourage one homeowner to fix up their home, causing a ripple effect on their block.

In 1979, the Rochester City School Board voted to close School 13 between Hickory and Gregory Streets. SWPC did everything it could to protest, but lost the fight to keep it open. SWPC held community meetings to determine the best use for the building and Conifer Development proposed converting the school into condominiums. The former school is now Gregory Park Commons.

Rev. Hay never shied away from tackling the question of how to improve the neighborhood and had a hand in many development projects over the years including the Stone Warehouse at One Mount Hope, replacing the branch library after it burned down, moving two houses to vacant lots, with Postler Jaekle and Horchek-Hayden and the creation of Marie Daley Park.

Separating Rev. Hay’s parish work from her community work is impossible. She serves the Presbyterian Church (USA) as a field consultant for Congregational Transformation Office of Church Growth. She has received the Distinguished Alumni Award from McCormick Theological Seminary; the Pinny Cook award from WXXI and was named one of the “Women of Vision” at Colgate Divinity School where she is adjunct faculty. Before she leads a week-long workshop for 30 young pastors in May, she’ll have six weeks of quiet following her fourth knee surgery. She has already started taking on leadership in NBN 6 and leaves for a trip to Israel in June.

Rev. Hay says that “the early slogan we chose for the community partnership was ‘“Building blocks of neighbors and friends’”; that phrase has been realized and is still a call for the future as each person, block, business, community group or faith community takes positive actions to improve the city. “

During a rousing retirement party on January 19th, colleagues who had met Rev. Hay as interns in the Eighties shared the lifelong impact of her guidance including her advice of being grounded in faith – that if you can’t figure out the answer, live with the question.