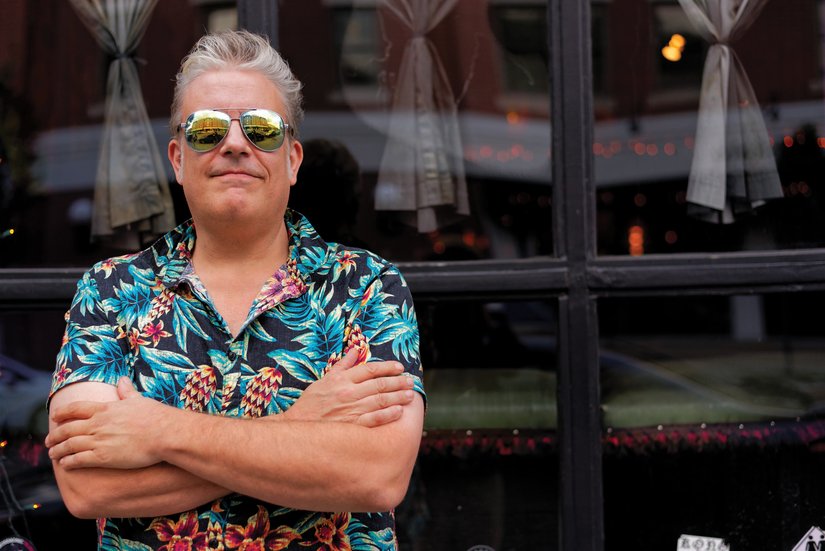 The Secret Life of El Destructo

You may have seen his paintings around town in places like Little Shop of Hoarders, LUX, Record Archive and Photo City Improv (the latter, having a continuous art show still going strong over 24 months) and thought to yourself delightedly, “Wow. Who the hell painted that?!” as you were drawn into a world chalk full of colorful renderings of two headed skeletons, women portrayed in multitudes of eclectic form—large space helmets, bold striking eyes, adorned in variations of pilot gear, retro renditions of the bride of Frankenstein—it almost feels as if you can’t appreciate the art and be silent…That somewhere inside the canvas and acrylic there’s a soundtrack and I bet Ed Repard aka El Destructo, the father of these pieces, probably has a playlist for them somewhere.

“I always liked music but punk was the music that made me say that I could be an artist. Punk and Dada are the ones that told me that I could do it. I didn’t think I was a good painter until I discovered punk rock. I’m a self taught artist. I’ve always drawn, traced over peanuts cartoons when I was a kid. I just liked doing it. It grew. No one stopped me.”

A Rochester native, he played guitar and was in bands for awhile; when he was a wee lad, he named his band “El Destructo” a moniker which follows him around to this day. You might hear him spin some tasty old school rock, punk and other tunes some Wednesday nights at LUX, see his name on social media or posters, or possibly spot him driving Harmonica Lewinski to their next gig. He admits that he never intended to use El Destructo as a an altar ego, but it appears that everyone else had decided for him.

Art seems to be home for Ed, having worked in the Nan Miller Gallery for 12 years. “At the end of the day, I was the guy who mopped the floor and cleaned the bathrooms,” he jokes, but admits he learned a lot while he was there. When the market crash happened ten years ago, it made him rethink his life’s purpose.

“That’s when I decided that I’m an artist first so I had to take the slings and arrows of poverty and that really kinda saved me from worrying about having tons of money.”

He describes his process as intuition lead, that usually an idea jumps in and he will just go from there, that he starts with something small and lets it grow. There’s many opportunities to see his art as he has at least 130 paintings around town, which can be bought and taken home. He replaces them frequently so there’s always new stuff to see. Except perhaps the last month or so, save for a few pieces he started within the last week, he admits that his studio is too hot and gross in the summer… but you can expect him to start pushing out new stuff in the fall.

*secret fact, if you look up on the ceiling in the little front room at the Dinosaur BBQ, there may be something painted up there by Ed.

Ed is music lead, art lead, and a musician’s friends. He spins music, sings once in awhile for fun and paints like someone left the gate open; with free expression and on his own terms.

“I started it because I thought that everyone should make art, and I want people to know that it is accessible to everyone. As long as you are enjoying yourself, it doesn’t matter. Don’t be intimidated or afraid to express yourself.”