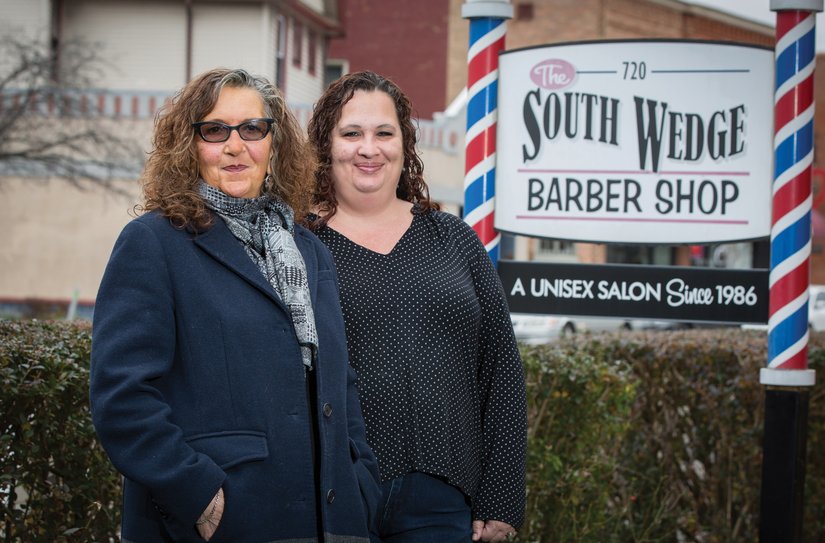 Even though the 30th anniversary of Gina Bellardino’s barber shop lands on April 1, Gina is no fool. My connection to her is from meeting her up at Durand Eastman beach. She’s been cleaning the beach for decades while walking her dogs. She doesn’t go there much when the beach is open for the summer, but does thank the clean-up crews who do such a good but thankless job in season.

Thirty years ago, she opened for business in the Art Deco building at 732 South Ave. and worked out of there for five years. When her lease was up, she moved over to 720 South Ave., had 30 days to gut a lawyer’s office and turn it into the welcoming place that can safely be called ‘Gina’s World.’ Her daughter Jen Bellardino has been working with her for 28 years.

Gina bought the building twenty years ago “when it was affordable.” The shop contains an eclectic mix of art, tchotchkes, plants and a bucket of large chalks for doodling. Part of the charm of their shop includes house pets Angel the 7 year old Zuchon, Eartha the turtle and Jose, a Sudan-plated lizard, whose 25th birthdays will also be celebrated on April 1st.

For people like me who don’t know, Gina kindly explained that the only difference between a barber shop and a salon is that barber shops do basic hair care but don’t do nails. She won’t bring them in because of all the chemicals. Their shop carries primarily Matrix brand products because they don’t do animal testing. Their salon services include coloring and perms.

Thirty years ago when the Barber Shop opened, the only competition was the late Bobbie Moore’s place on South Avenue where Personal FX is now located. Even though there are three barber shops on the 700 block of South Avenue, Gina says this doesn’t make any difference to their sales since they all have their own followings.

Gina has had a number of bumps in the road over the past thirty years, including two bouts with non-Hodgkin’s Lymphoma when she was in her thirties, but, as she says, “I don’t have time to be sick.” As for retirement, she has no plans. We hope the South Wedge Barber Shop will continue serving the South Wedge community with their funky and eclectic style for many years to come.