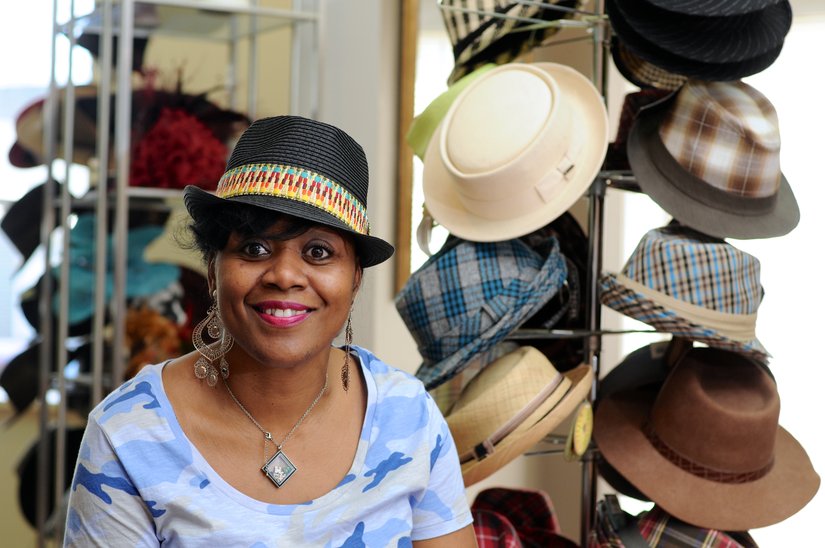 For those in the know, there’s a hat for every occasion and Tonja McNair, owner and manager of Headz Up Hats, is very much in the know. The Kentucky Derby, Mother’s Day, Easter and Father’s Day are all big shopping and gift-giving occasions for hat wearers.

Headz Up holds one of its biggest events of the year, the Daystar Derby at Oak Hill Country Club, before the Kentucky Derby in early May. The Daystar Derby and Mother’s Day are two of her busiest times of the year while her biggest event is the Anniversary Party they hold in November at the German House. They have musicians, a hat fashion show and loads of fun. She also donates a portion of the sales to charity. (Last year over $400 went to Camp Good Days and Special Times.)

Her path to the hair care and hat business wasn’t always smooth or straight. Tonja had worked for seven years at Bausch & Lomb before going to hair school and working in a salon on Thurston Avenue. She then opened Tonja’s Personal Touch on South Avenue (at two locations – 658 and 674). After 17 years as a hair stylist, she added Headz Up Hats in 2007.

In relation to starting her own business, Tonja said, “You don’t always know what you’re learning” but after growing up watching her mom, “it didn’t seem brave to start her own business. It was a no-brainer.”

For 12 years, she watched the block on South Avenue develop from empty to full, before moving to the corner of Cypress Street and Mount Hope Avenue in September 2011. The new store carries men’s and ladies’ Fedoras, genuine fur felts, wool felts, Kangol, Panama, Christy brands, as well as accessories like earrings and costume masks.

Two years ago, Tonja was inspired to design and create her own hats and now has a passion for these self-made pieces. If you are a hat-lover, it is worth the trip to see her stunning, colorful hats.

Tonja grew up on Chili Avenue in the city and graduated from Charlotte High School. She says she gets the friendliness gene from both her parents. Her dad was an RTS bus driver and her mom, a bubbly friendly woman, ran a day care business for 25 years. Both are the kind of people who “never met a stranger.”

Tonja and her husband Curtiss have a blended family of five children, with the youngest almost through high school. Several years ago she started to get into healthy eating habits because she preferred to deal with high blood pressure with more natural solutions than just taking medication.

These days, the Personal Touch salon remains a part of her business, but she has shifted her focus to creating signature pieces.