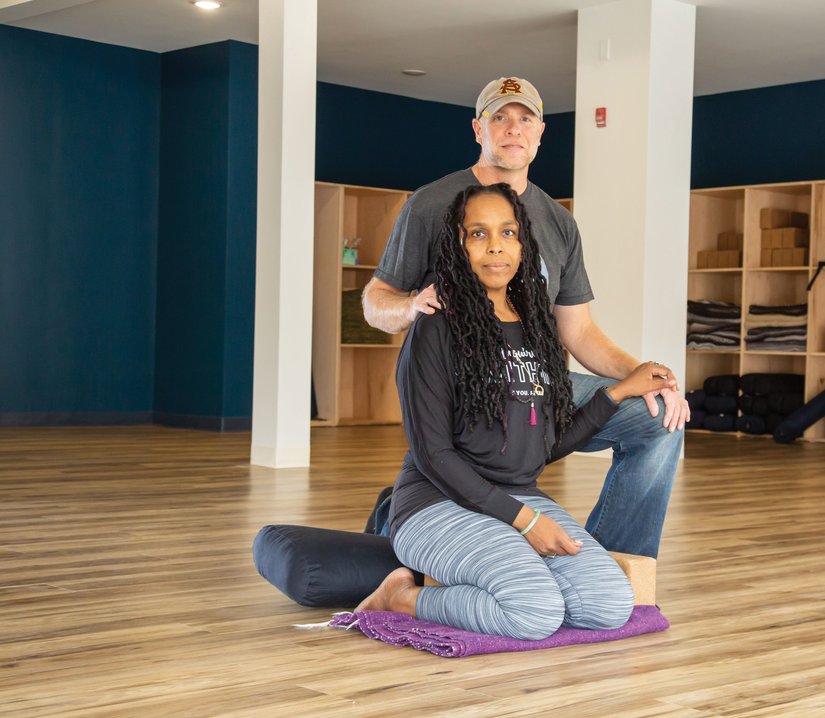 Tru Yoga Open For All

From her eyes, to her smile and handshake – it’s easy to like Imani Olear at first sight. She is exactly the kind of warm and welcoming person the world needs now. Since the spring of 2019 when Imani and her husband, Eric Olear became owners of Tru Yoga, they took on the project of owning and expanding one of the South Wedge’s most popular ventures, following the ownership of Lyndsay and Peter Nabozny and the creator of TRU, Christi Joseph.

Imani’s goal is to make sure the new location is accessible to everyone. Even moving to providing Adaptive Yoga for those living with disabilities, seen or unseen. She knows what it’s like. Last year at age 49, she had a hip replacement, and instead of it’s being an ordeal she said it was wonderful.For the first time in ages, she didn’t feel any pain. Even though she’s back in the swing of things since that surgery, she still faces the invisible limitations caused by lupus and rheumatoid arthritis.

Like many people, Imani did not know about yoga when she was growing up. But since then, she has become a serious student and an avid teacher with a mission to take conventional yoga classes to people of color or of low income and with any kind of physical limitation. She has studied at four different studios in town, receiving over 1,000 hours of training and is currently studying to become a Mindfulness Facilitator.

As for Eric, he grew up in Kendall, Orleans County, with his brother Greg and parents, Kathy and Ed Olear. He holds degrees in music and has been a band director at the middle school in East Irondequoit for 19 years. Additionally, he served in the military for 28 years, and is a retired commander of the 198th Army Band in Rochester.

On the light side, they met seven years ago through Match. com. She’d had several bad dates, and he had only one – her. Imani has been “Changing Communities One Downward Dog at a Time,” through Yoga 4 a Good Hood, taking yoga around the city since 2013. She is also a pastor, downtown at Evangelical Lutheran Church of the Reformation – where, of course, she gives yoga classes. And that’s how she and Eric met Lyndsey and Pete who were very supportive of her goals.

Imani grew up in her paternal grandparents’ home in Columbus, Ohio. Her grandfather was a steelworker at the Timken Roller Bearings Co. during a time in the Seventies when you could take kids to see the infernos, she said. From those visits she saw how hard he worked to support the family. Her grandmother was a homemaker who raised her and her three brothers, Lewis, Traci and Mark. She was the baby and suffered from chronic asthma as a child (in a place that no doubt lacked clean air.) Her maternal grandparents were from Luray, Virginia, and when she visited them as a girl, she wasn’t allowed to ride the horses because of the dust. Somehow, around the age of 12, she came across, “Light on Yoga” by B.K.S. Iyengar. She didn’t read the whole book, but it got her attention, because of the yoga postures, even though her grandmother’s didn’t want her to read it. Her parents lived in town, but were divorced and her mother, who was “one of the best humans she ever knew” suffered with mental illness. Her father who was working on his doctorate, gave her a new name when she was in her 20s, changing her name from Kimberly Elizabeth to Imani, which means Faith in Swahili.

Imani has survived several incidents of abuse and has gone on to outgrow her own ‘stinkin’ thinkin.’ One of her lowest moments was several years ago, when she was working for a church and did not realize that she was struggling through a depression low. After she made some poor decisions she lost her job and fell into an even deeper depression. She said, “Now being in my body helps me to stay ‘here and now’.”

One of Imani’s biggest honors was being selected to give a TEDX talk at the University of Rochester in April 2019. Her vision is so bright, it could light up a football field, and when you see her on the TEDX talk, “H.O.O.D. Tales: Healing Ourselves through Oms and Downdogs,” you’ll know why. Her portrait was one of those featured in a large colorful mural at the Memorial Art Gallery, and she is also portrayed in a mural at Charles Settlement House.

Despite harsh events and living with of auto-immune diseases, Imani knows how to ‘stay in her body’ so she stays at peace and shares it.