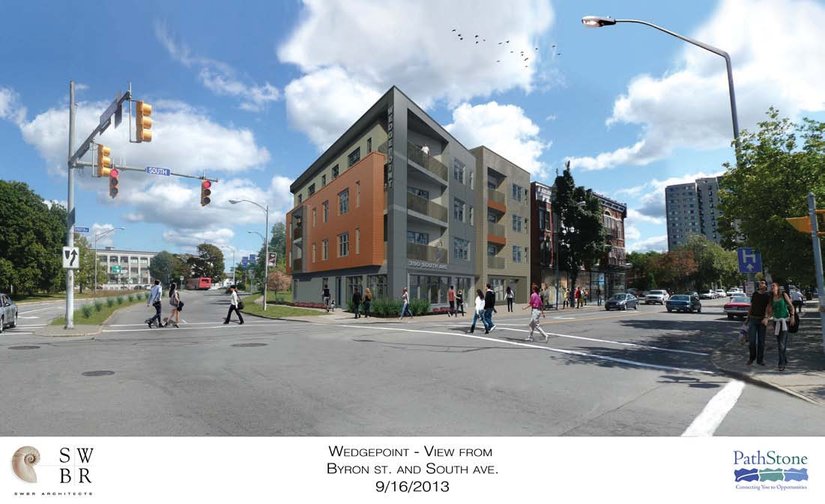 Where?  The WedgePoint project will be built on the land formally occupied by the Downtown Travelodge at the corner of Byron Street and South Avenue.

Who owns the land? John Billone, Jr. and Flower City Development. The Billone family acquired the property in 2002, tore down the former structure and acquired three additional properties from the City of Rochester at 420, 426 & 428 South Avenue. 420 South Avenue was torn down as well. 426/428 South Avenue was renovated with Main Street Grant tax dollars awarded in 2007 and has remained vacant since. A plan was proposed by Flower City Development and SWBR Architects for a mixed use development with hopes of breaking ground in the spring of 2010.

Who is developing the property now? PathStone, a private, not-for-profit regional community development and human service organization. Their mission is to build “family and individual self-sufficiency by strengthening farmworker, rural and urban communities” and by promoting “social justice through programs and advocacy.” Other housing they have developed around Monroe County includes Anthony Square Apartments, Mildred Johnson Estates, and Susan B Anthony Apartments.

What’s the plan?  PathStone is planning on building an affordable housing 3 story apartment complex with about 50 units and limited retail space on the first floor. The design of the new development was done by SWBR Architects.

Where is the funding coming from?  PathStone is pursuing Federal, State and local monies.

Who is the target market? 81% of the units will be for individuals and families earning 60% or less of AMI (Area Median Income) and 19% of the units will be for individuals and families earning 61-90% of AMI. AMI will be calculated using the Rochester Metropolitan Statistical Area (MSA) (a 5 County Region including Monroe, Orleans, Wayne, Ontario, Livingston Counties.) This is higher than the AMI of census tracts 32 and 34 which is the South Wedge neighborhood. The AMI for the MSA is $52,131 while the AMI for the City of Rochester is $29,701 and the AMI for the South Wedge is $24,369. Given these limits, it is likely that the residents of the WedgePoint development will have incomes higher than many of the residents already living in the South Wedge neighborhood.

How far along is the process?  PathStone has submitted plans for WedgePoint to the state in the early round of the funding competition. If funding is awarded in the first round, the project would have to close and start construction within 120 days. If they aren’t funded in the early round, the project moves into the regular round. If funded there, they would want to move quickly but there is no 120 day restriction. The footprint of the project and the general design is pretty much set. The design team is still making tweaks to accommodate comments heard by neighbors over the summer months at various meetings.