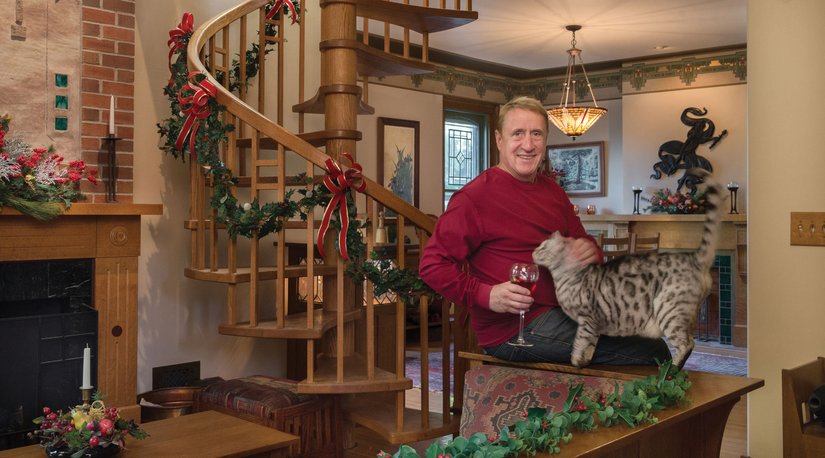 EXACTLY 200 years ago, in 1817, Lyman Munger settled on the eastern bank of the Genesee River wilderness with his wife and five children, in the area between what are now Averill Avenue and Hickory Street. A Connecticut native who had served in the Revolutionary War, Munger’s extensive land purchase would later become much of the South Wedge neighborhood. Within a few years, houses began appearing along the dirt lanes created to span the gap between South St. Paul (now South Avenue) and the mighty Genesee River. By 1845, the lanes were on the official map of the City of Rochester, with names like Hickory Street, Jefferson (now Hamilton), and Clarissa (now Sandford.) The City map of 1851 shows a handful of houses along these lanes, 17 total on Hickory Street, at least a few of those houses still stands today.

Walking down Hickory Street 200 years later is a treat for anyone interested in architecture. The tree-lined street is home to a range of old houses representing a wide variety of architectural styles and time periods from the early to late nineteenth century; many have been meticulously restored and landscaped. There is a handful of exceptional houses on the street, and one of the stand-outs, a brick Italianate with exuberant gardens and elegant landscaping, beckons passersby to stop and take a closer look at the details. Details like the stained glass panels in the oak front doors, the etched glass transom window over the doors, the iron and brass railings, the delicately incised lintels over the windows, and the unusual double cross on the western side of the house. A peek inside the front doors offers a glimpse of a gracefully curving staircase and elaborate newel post. It’s a remarkable home in many ways, eye candy for the neighborhood. It’s clear that the house has found an owner who’s in it for the long run and is passionate about the details. It’s clear the owner has found a home he loves.

The owner, David Voisinet, moved to Rochester in 1990, after five years as a law librarian at U Conn, for a job as director of the NYS Appellate Law Library downtown. He was living in a carriage house apartment on Granger Place when, in the spring of 1991, he went to an open house at the condos at Gregory Place; the converted school between Hickory and Gregory Streets; to see the second-floor unit which happened to be underneath the cupola. Dave said the upstairs apartments have attic storage which, for this one, was an unfinished room with a big, long ladder to a trap door to the cupola.

Afterward, as Dave drove around the block, he saw a for-sale sign at a brick house on Hickory. He called the owner, a doctor at University of Rochester who had bought it for $135,000 when prices were high, and was asking $130,000; which was beyond Dave’s price point. Housing prices in the Wedge have fluctuated over the years and the doctor sold it to him for $120,000. In 1992, Dave converted it from four units to three, with two single bedrooms downstairs and his own apartment upstairs. During the renovations, he could tell it was built in two stages because of an internal brick wall between the back and the front and differences in windows. He believes it was owned by a milk-delivery business that used a six-bay garage at the back, since torn down, for milk wagons. Contractor Mark Caulfield remembers the house being sold at auction to Walter Schnabel who did most of the restoration work on it, and to a person named Volpe after that. Mark’s wife, Karen, original owner of Historic Houseparts, helped the new owner locate a cupola to replace the missing one in 1980. She brokered the deal in 1980 to move an antique cupola from a Webster house that was demolished to make room for a new McDonald’s. (Ouch.)

Over the years, Dave said he went “native” and put down roots in Rochester. In the late 90s he bought the circa 1838 house to the east and two years later, the 1890 home to the west. His intent was not to expand his real estate portfolio, but to garden all three yards. So where does he get his green thumb from? His late dad.

Dave grew up with his mom and dad, Ray and June Voisinet, as one of five children outside of Buffalo. He graduated from Tonawanda High School in 1970; got his undergrad degree at Buffalo State, a law degree from University of Buffalo in 1978, and then went for his masters in library science at SUNY Albany because while working in the library at UB, a librarian persuaded him that being a law librarian was a good career. He was an academic law librarian for 10 years and then had a dream job for 23 years, at the NYS Appellate Division before retiring in 2013.

Besides keeping up with the extensive gardens on all three of his properties, Dave travels quite a bit. He has a get-away place where his brother lives in the Marigny neighborhood in New Orleans, four blocks from the French Quarter and very much like the South Wedge. He and his brother and three sisters own his 88-year-old mother’s house in Maryland, which they all keep up; and he and one uncle visit another uncle in California, who is aging. Besides family obligations he went to England in the spring and to a friend’s destination wedding this summer in Vieques, Puerto Rico (which got hit by Irma and Maria.)

In 2005, Dave added a second story rear sunroom with views to the south, east, and west. At the time, he interviewed three architects including John Bero who asked him, “Do you know what you’re doing?” Clearly meaning he was overspending on the house. By that time, he never worried about overspending on the house he loves, adding two spiral staircases, a Rumford-style wood-burning fireplace, and changing the décor to Frank Lloyd Wright-American Arts & Crafts. Asked if he’s finally finished renovating this old house, his answer is, “I’ve been doing it for 26 years now and I’m halfway done.” He’s got a new kitchen and bathroom in his sights as well as reworking the layout of several bedrooms and a sitting room.

Since Dave visits family for Thanksgiving and Christmas, he doesn’t usually decorate for the holidays, but for 25 years has put candles in the windows, which is a welcome sight to neighbors and passersby during the long nights of winter.